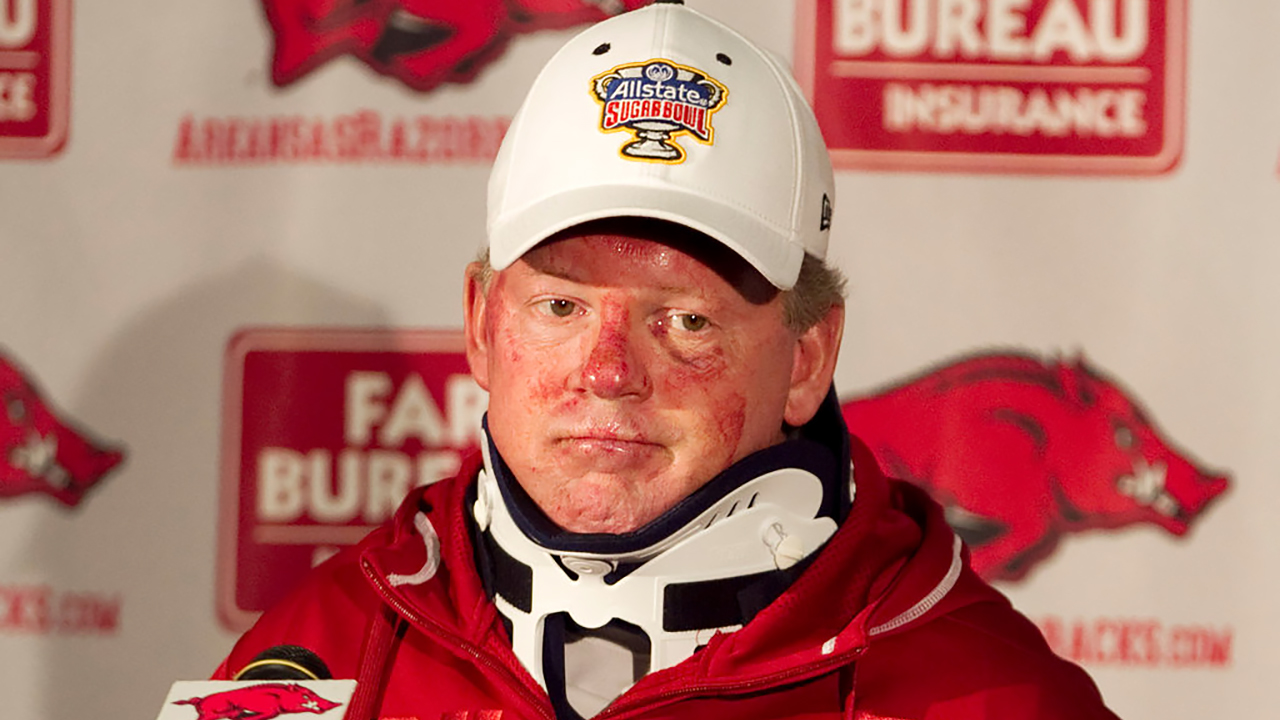 Hold on a minute before you cue “Reunited and it Feels so Good.”

Former Arkansas coach Bobby Petrino shed a few crocodile tears at the Little Rock Touchdown Club this week and all of a sudden some Razorbacks fans are ready to give him the key to the state.

Have you forgotten what Arkansas football has become?

Last year 2-10, and utterly irrelevant. And now already questions from some about the ability of the new coach 14 games in. An uninspiring opening win against an FCS foe and another SEC loss.

This week, a narrow favorite to beat a Group of 5 school which only won three games last year (one of them against Arkansas).

That is low. Arkansas is not a perennial power, but until Petrino left the program in tatters, it was very respectable.

Petrino is at least partially responsible if not more than that for the downturn and former athletics director Jeff Long is culpable as well, hiring Wisconsin’s Bret Bielema to succeed Petrino. Bielema shares some of the burden, too.

But make no mistake, Petrino got the ball rolling on this mess when he had an affair with a staffer, gave her a promotion and showered her with cash and gifts and eventually lied about a motorcycle accident in which she was a passenger.

Read that sentence again. How many big-time coaches have pulled a stunt like this? I am really surprised there hasn’t been a book, 30-for-30 or major motion picture chronicling the events because they are so sensational and salacious.

No matter what you say, Long had no choice but to terminate Petrino. Then, he had to decide how to proceed and went with veteran assistant John L. Smith, who ran a decent team into the ground.

That dumpster fire season made it hard for Bielema to recover from. A couple of assistant coaching defections and some bad recruiting choices, and Hogs football was in deep despair.

We maybe didn’t know how bad until Morris took over last year, and we saw how atrocious the line was (normally a hallmark of Bielema teams) and how little athleticism was on the roster.

As far as Morris goes, there are red flags. You’d have to be blind not to see them, but he deserves a fighting chance.

He has been masterful on the recruiting trail, but the verdict is still out on his handling of the quarterback competition and his in-game adjustments. Both will be on display for evaluation Saturday against Colorado State.

But going back to Petrino. He created all of these situations, and it’s unforgiveable.

That’s the degree of indiscretions Petrino committed. They were more than mistakes. It was calculated deception.

You can say bygones are bygones, but do you really care what he has to say now? How could you even think about letting him coach your team again?

Some of you have made those comments, though. Absolutely ridiculous.

Petrino acted like a jerk long before this incident. If half the stories I have heard from former players and staffers are true, it would make your head spin.

It sounds like players and recruits were getting tired of the Bobby Knight act, too. He was probably a few years from being fired because prized recruits such as receiver Dorial Green-Beckham (he had his own issues at Missouri) were scared off.

Even the John L. Smith year, Petrino may not have had the success some predicted because the defense was not as talented.

It’s a pattern that reared its head at Louisville when he was fired after last season. He had some decent years, and then started tapering off.

You’ll remember he used a similar tearful apology on national TV which helped him reignite his career at Western Kentucky.

He unceremoniously bolted from the Hilltoppers for a better job at Louisville, his former employer. Do you think he changed and became kinder and gentler?

He made sure to land another job and soon was back to bad behavior, which was chronicled at Louisville.

Why do you think he is sincere now? In one breath he is sorry, and the other he is mentioning he wants to coach again. Hint. Hint.

So what if he appeared at the Little Rock Touchdown Club for free? Petrino should be remembered for pushing Arkansas football to a downward spiral.

There are no amount of tears or apologies that can make up for that.