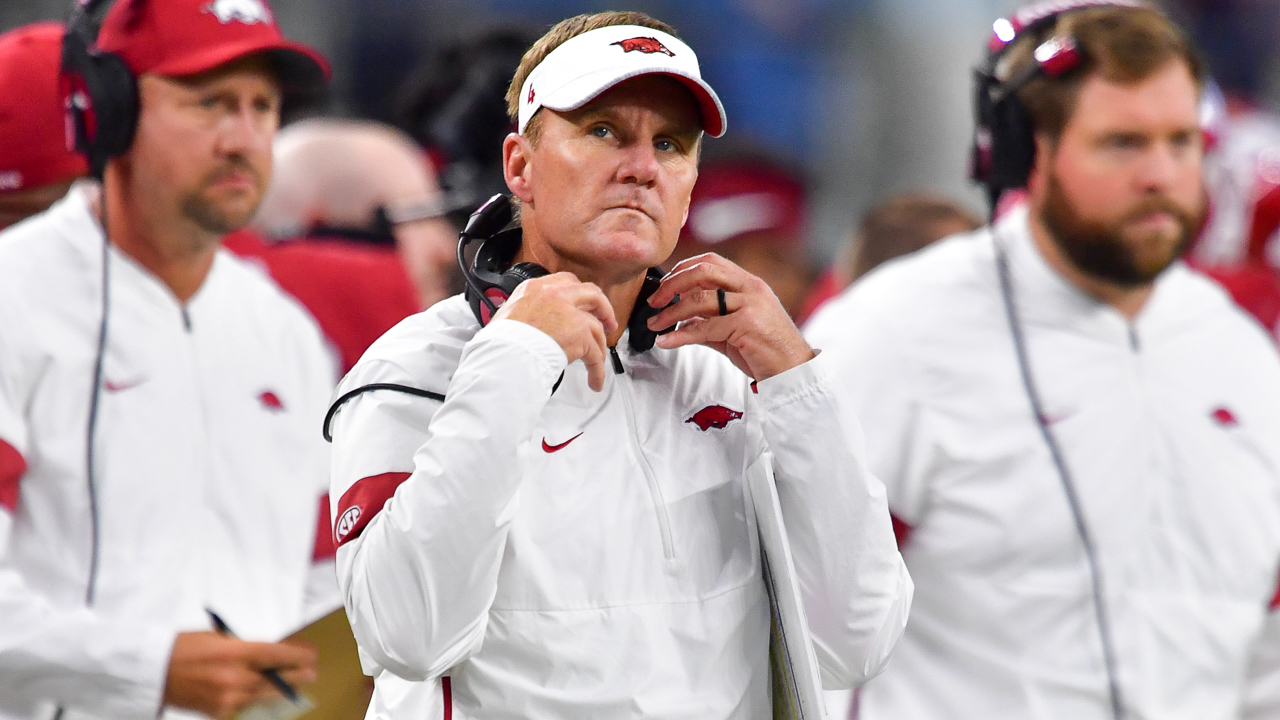 The saying in the Southeast Conference is “it just means more” and Chad Morris is finding out they ain’t kidding using that … which makes it a little tougher to win.

He hasn’t gotten a league win yet.

Maybe one of his better chances fall to the turf at AT&T Stadium on Saturday afternoon as tight end C.J. O’Grady crouched holding his head in both hands out of frustration.

“It was the little things,” Morris said later.

For a lot of fans who felt O’Grady’s frustration, they are beginning to wonder how many of these little things are going to create a big pile that’s probably going to not be pleasant to be around. The psychotic internet trolls who seem to revel in Hog fans’ misery are jubilant.

Oh, don’t get your hopes up (or worry if you’re on the other side), Morris isn’t going to get fired. He’s got until at least through next season before that happens, regardless of how this season plays out.

Part of it is financial. Paying two coaches a lot of money to NOT coach in Fayetteville is not going to happen. The other part is firing Morris now makes it virtually impossible to find much of anybody to come in, regardless how much anyone is willing to pay.

Stop with the Stoops’ talk. He ain’t coming, just like Gus Malzahn was never coming back to Fayetteville to coach the Razorbacks.

Morris knows all of this.

Yes, there have been some inexplicable losses that should have been wins. You know the games I’m talking about and no need to relive those moments.

“That’s on us as coaches,” he said Saturday. “We’ve got to continue to keep coaching hard and continue to put these young men in situations to be successful.”

The problem with youth is they sometimes do things that, well, can’t really be explained. With a roster of about 72 freshmen and sophomores at last reckoning, goofy things are going to happen by players who simply screw up.

Yes, you can win starting a couple of freshmen surrounded by juniors and seniors. Throw in a smattering of junior college newcomers and you’ve got a combination of even more first-year players in the program.

Morris walked into a situation with the Hogs unlike any other coach in the SEC West has walked into since Arkansas came into the league … with the notable exception of Lou Holtz and what he inherited at South Carolina in 1999.

At least Holtz inherited a team that was 1-10 the year before and he got the Gamecocks to 1-21 before an 8-4 breakout season. Of course, there was a three-year NCAA probation after Holtz left, but Steve Spurrier was set up for success.

Morris inherited a decade that featured a combination of inadequate recruiting combined with poor player development. That’s a bad combination and no matter how good you are, that is going to take some time to get turned around.

But, sooner or later, the frustration over a lack of wins is going to boil over. It already has for some fans.

Whether you agree or not, Morris gets it.

“Losing is not acceptable,” he said again Saturday. “There are no moral losses. We’ve got to find a way to win when you get down to the end like this.”

In a league that has changed almost completely in the last five years and seen a gap widen between a few select programs and everybody else, just staying in place is nothing like it was when this mess began developing.

Now it’s Morris who’s got to figure out a way to somehow turn it into wins.

The sooner the better for most folks.