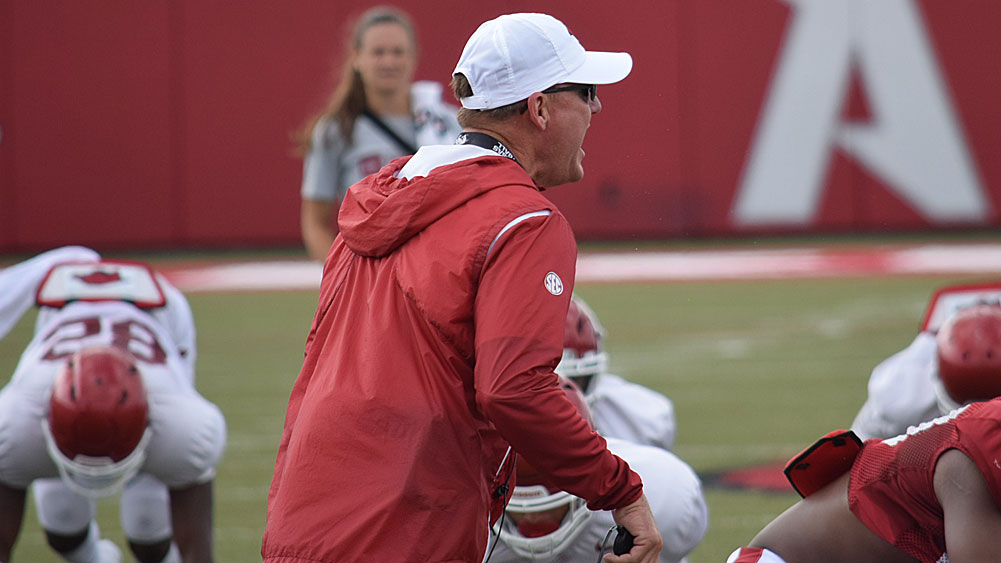 It didn’t take Chad Morris long to finally get the Razorbacks’ attention at Monday morning’s practice.

“You push or I will!,” Morris yelled as he called the players together just a period or two into the practice. “I got all day! I don’t like your attitude!”

He then had the players do up-down drills. If you don’t know what that is, it’s exactly what it says. The players get up, run in place, then drop down flat on the ground, get up and do it until someone says you can stop.

It caught most of us in the media by surprise. That was a scene I saw a few times when Lou Holtz was coaching the Hogs, but not much — if any — in between.

The best way I can put it is Morris showed he’s an old-school coach. I remember coaches yelling they were going to run players until they puked or passed out … whichever came first.

But that was 40 years or so ago. I’m old enough to remember when the coaches told you to run through a wall, you said, “Yes sir!” and headed for the wall. Hopefully you could remember the helmet. Not anymore.

The Hogs on Monday, quite frankly, didn’t appear that surprised.

“People were walking around,” cornerback Ryan Pulley said. “We knew we were going to get punished at some time or another … we just took it to the chin and we just got better today.”

It was a change from the previous regime that appeared to me at times to be supervising recess at playschool.

“We didn’t address it like that,” tight end Austin Cantrell said.

It’s all part of the change that Morris is trying to instill. He doesn’t just talk about playing fast and playing tough.

“I think the biggest difference between the old staff and the new one is the emphasis on the culture that we’re trying to build,” Cantrell said. “It’s not that coach B (Bret Bielema) didn’t emphasize it, but, I mean, it’s every day with coach Morris. We’re pounding it. It all starts with a good foundation.”

“The physical scrimmage and coming off of the off day, the energy wasn’t there,” linebacker De’Jon Harris said. “Even in the walk-through’s and warming up.”

“To get tougher we’ve gotta practice tougher,” he said.

You get the idea Morris, who looks more and more like the old-school high school football coach he probably is, would love to resort to some of the tough tactics.

He would probably be the type to do what Bobby Bowden did at Florida State after they opened in the 1988 season in Miami ranked No. 1 and got kicked sideways by the sixth-ranked Hurricanes, 31-0.

Infuriated on the plane ride back to Tallahassee immediately after the night game that was carried live on CBS on the Saturday before Labor Day, Bowden decided to get his team’s attention.

“We drove straight to the stadium, coach Bowden had the players put on those wet uniforms and we scrimmaged,” said Max Howell, who was on Bowden’s staff then. He worked with the secondary that meant he basically made sure Deion Sanders and Leroy Butler were comfortable, but not after getting back to Tallahassee.

“We scrimmaged until the sun came up on Sunday morning,” Howell said. “But we didn’t lose another game.”

The Seminoles finished third in the nation, behind Miami and Notre Dame, when Holtz got his only national championship.

Morris can’t do that now. NCAA rules simply don’t allow things like that.

But you get the idea there could be a situation where he would.

It’s a good bet nobody is doubting now he was serious.