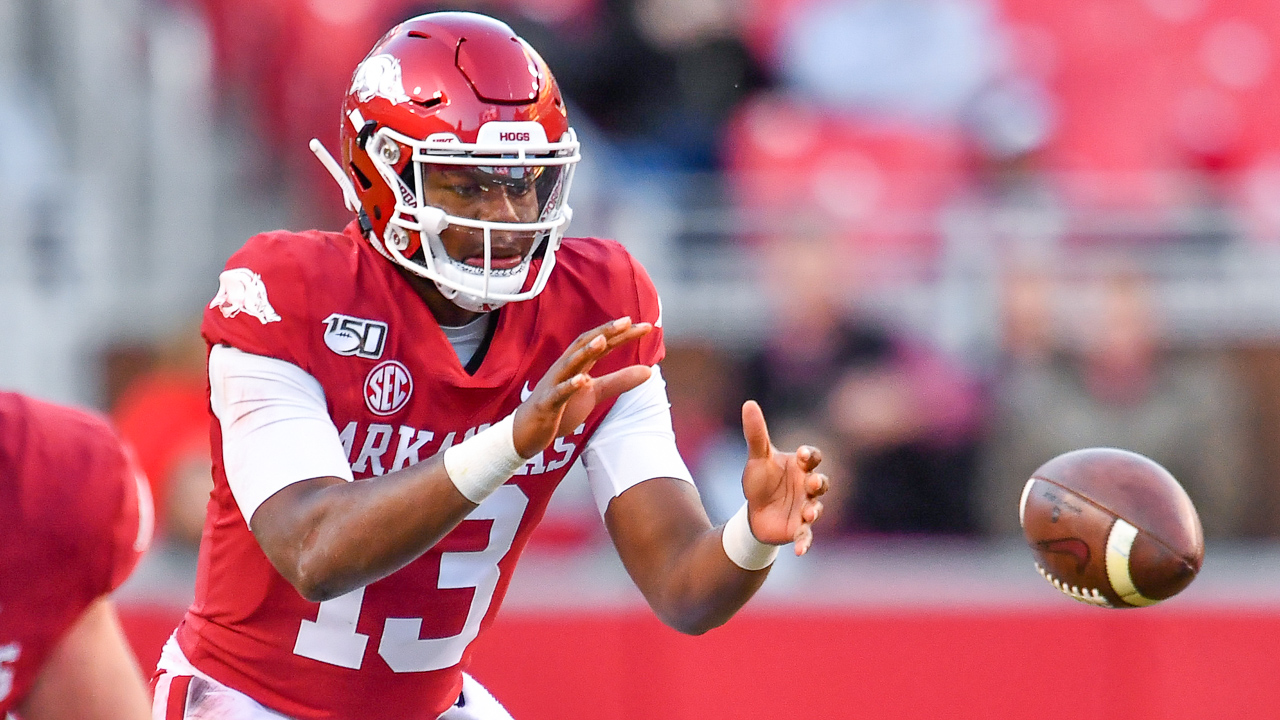 For a change of pace, Chad Morris decided to not try and keep Western Kentucky in complete suspense over who will be lining up behind center in Arkansas’ final game in Fayetteville on Saturday.

“We’ll start John Stephen Jones this week,” he said right off the bat in his Monday press conference.

There is an argument to be made by some that maybe he’s still not getting it right and true freshman K.J. Jefferson should be starting, but the guess is he’ll be in the game sooner rather than later.

“You felt the lift on the sidelines — I know I did — when they went in,” Morris said about the pair in the 30-point blowout loss to Mississippi State last week.

It was offensive coordinator Joe Craddock that kinda created a question by accident Monday.

“Both of them possess the ability the run a little bit better than the other guys,” Craddock said. “That’s something we’ve always had in our offense is a guy that extend a play with his feet and also have a quarterback run or two mixed in.”

That’s the offensive coordinator admitting it’s taken this coaching staff 21 games over most of two seasons to find one to do that.

If it’s that big a part of the offense why did it take this long to put somebody in that can do it?

“We’ll come up with a good plan to make sure they’re both comfortable with what we’re doing and making sure that they can execute the offense as a high level,” Craddock said.

Both Jones and Jefferson were 50 percent on scoring possessions against the Bulldogs. Each got just two possessions, which wasn’t their fault.

The Hogs’ defense didn’t appear to have a whole lot of interest in tackling anybody and that allowed Mississippi State to just control things with the run game. They dominated the time of possession, 40:09-19:51 … yes, nearly three full quarters of the game.

Getting both in the game from the start will generate a buzz this entire program desperately needs.

But it does just add to what is appearing like a completely disorganized coaching staff, starting with Morris.

More than one person has asked why it took this long to figure all this out.

Maybe more puzzling is the curious way Morris has mismanaged the entire redshirt thing with a few players, notably offensive lineman Brady Latham and defensive back Jalen Catalon. The pair has played 12 snaps this year, primarily kneel-downs at the end of games.

“We don’t want to burn a guy’s redshirt just to get a few snaps in,” Morris said after the Auburn game.

Which means he either was ill-informed about the amount of playing time, forgot about it or simply can’t manage it.

Latham had one snap against Colorado State and the last three offensive plays against Mississippi State and Alabama.

Exactly how that could happen is a mystery and, in true fashion, Morris will continue lapping the question with clichè-ridden answers.

It sounds like he either doesn’t know how it happened or he has basically spent a year getting paid millions learning how to evaluate and develop players for the SEC level.

Based on his handling of the quarterback situation, you might tend to lean a little to that last one.

Now Jones will start this week. Yes, the quarterback who both Morris and Craddock said in fall camp put the team into the end zone the most isn’t starting until November 9.

“The moment has not been too big for him,” Morris said about Jones. “I’ve watched him from high school and to where he is now and just his development.”

Jefferson physically has looked the part of an SEC quarterback since he stepped on campus. Other coaches around the league are almost drooling over the possibility he puts his name into the transfer portal.

“We will play KJ as well and continue to develop him,” Morris said.

Apparently, it’s taken Morris from August to the second week of November to figure out what players have been saying all along:

The future is now.