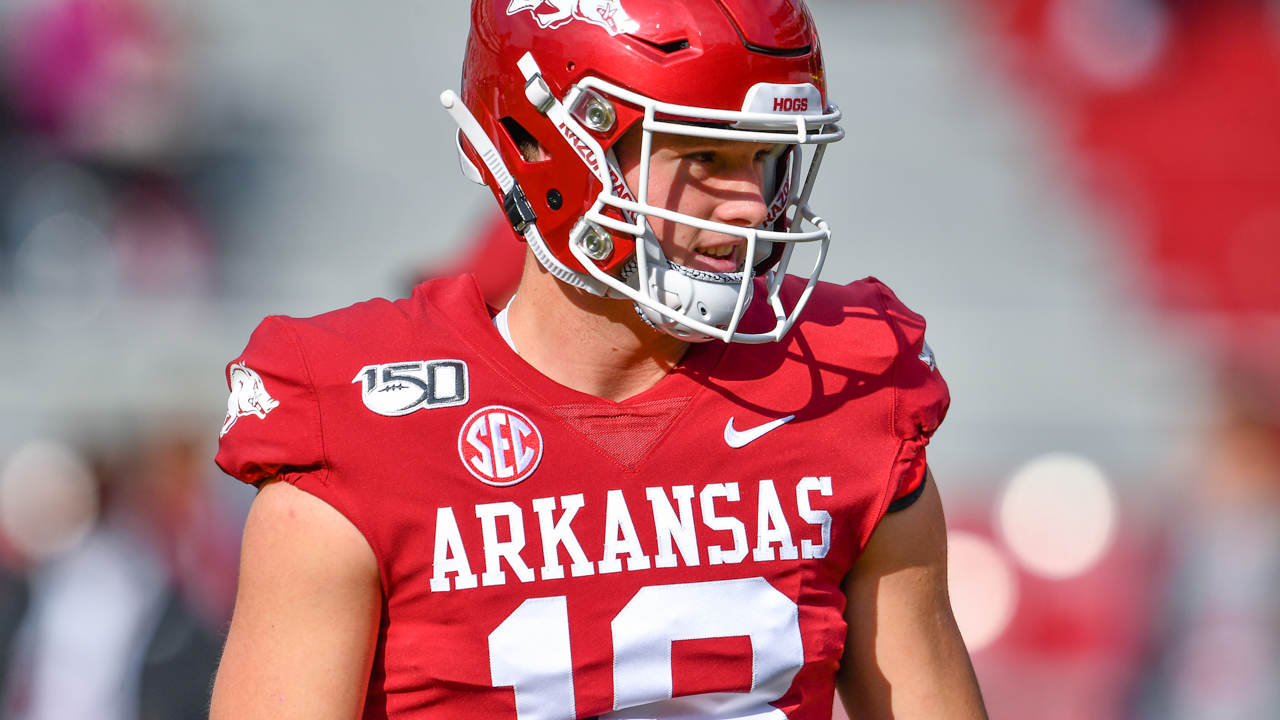 In the complete dysfunction of two seasons it probably shouldn’t be that surprising if former walk-on Jack Lindsey becomes the eighth different starting quarterback Friday in Little Rock against Missouri.

Interim coach Barry Lunney, Jr., was asked Monday the inevitable question about if he would be comfortable doing that.

There wasn’t any wiggle rooom in that answer.

Lindsey, who’s become steady as the placement holder, got the first snaps at quarterback against LSU last Saturday that he’s seen in his four seasons with the Razorbacks.

Apparently, he’s quietly developed himself into a quarterback. It’s not like he had much coaching.

Dan Enos, who coached the quarterbacks under Bret Bielema, didn’t spend a lot of time working with Lindsey. Current offensive coordinator Joe Craddock has shown he doesn’t have a clue about how to develop anyone.

“He just knows what’s going on,” Lunney said about Lindsey. “He knows where to go with the ball. He knows the offense in and out. He’s kind of got the ‘it’ factor when it comes to those types of things. He’s just kind of a football junkee with a really high IQ.”

He doesn’t have the athleticism of true freshman K.J. Jefferson, who has tremendous upside, but that’s going to be a year or two down the road. Right now, Lindsey may know more about HOW to play football at this level than anyone else.

We’ve seen it in practices for a couple of years, but you hold back judgement until you see it in a game. Over nearly 50 years, you see a lot of quarterbacks who look like All-Americans in practice, but get in a game and you wonder why they’re even on the roster.

Lunney didn’t announce a starter at quarterback Monday. On the depth chart, Lindsey is listed second with an OR between he and Jefferson. He does fit the profile of what Lunney talked about is critical to success with the Hogs.

“At the end of the day you better be able to evaluate ’em and develop ’em,” Lunney said. “It’s really critical here … it always has been. You’ve got to identify those players who can help you win games, whether it’s immediately or three years down the line.”

Especially players within the state, even if they are walk-ons like Lindsey.

“You’ve got to go get ’em, you have to go all-out and do everything you can to get those guys, especially those guys within these borders,” he said. “There are some out that you’ve just gotta dig a little deeper for.”

In other words, like I’ve said over and over (and a lot of media people argue about), Arkansas is never going to be a consistent team in the top 10 of the recruiting rankings.

“It’s not about the splash on national signing day,” Lunney said Monday. “It’s about getting it right. There’s enough around here if you get the right guys to build it. You’ve gotta coach ’em up.”

Lunney knows what every coach that’s had success here for 60 years has known — it’s about evaluation, development and getting players that want to be part of the program here.

It’s really just selling what you’re doing to the right people who want to buy. That includes the fan base, by the way, that’s desperate for any kind of steps forward.

Chad Morris tried to do it but never could sell himself to the fans and, ultimately, the players themselves. Maybe his biggest mistakes, though, came in choosing his staff. Longtime SMU followers said Craddock would get Morris fired if he was the coordinator.

Lunney showed once again Monday why he should be part of the Razorback program going foward. What role he plays in that is something for others to decide.

Every coach in the last 60 years has won with over-achieving players (many from the state) that were developed and played above their ranking with fanatical effort.

Playing Lindsey on Friday checks off a lot of the boxes Lunney talked about in what it takes to build a program in Fayetteville:

• He grew up wanting to be a Razorback, following in his family’s footsteps.
• Lindsey was more than happy to be a walk-on.
• He worked at it every day and developed. It might have been interesting if a coach had helped, but the key here is he progressed.
• Lindsey figured out a way to get on the field, holding for placements.
• When he got a shot at quarterback, well, he made the most of it.

We’ll see how it plays out on the field Friday in a game that will mean a lot to the players that still care about anything and have a little pride.