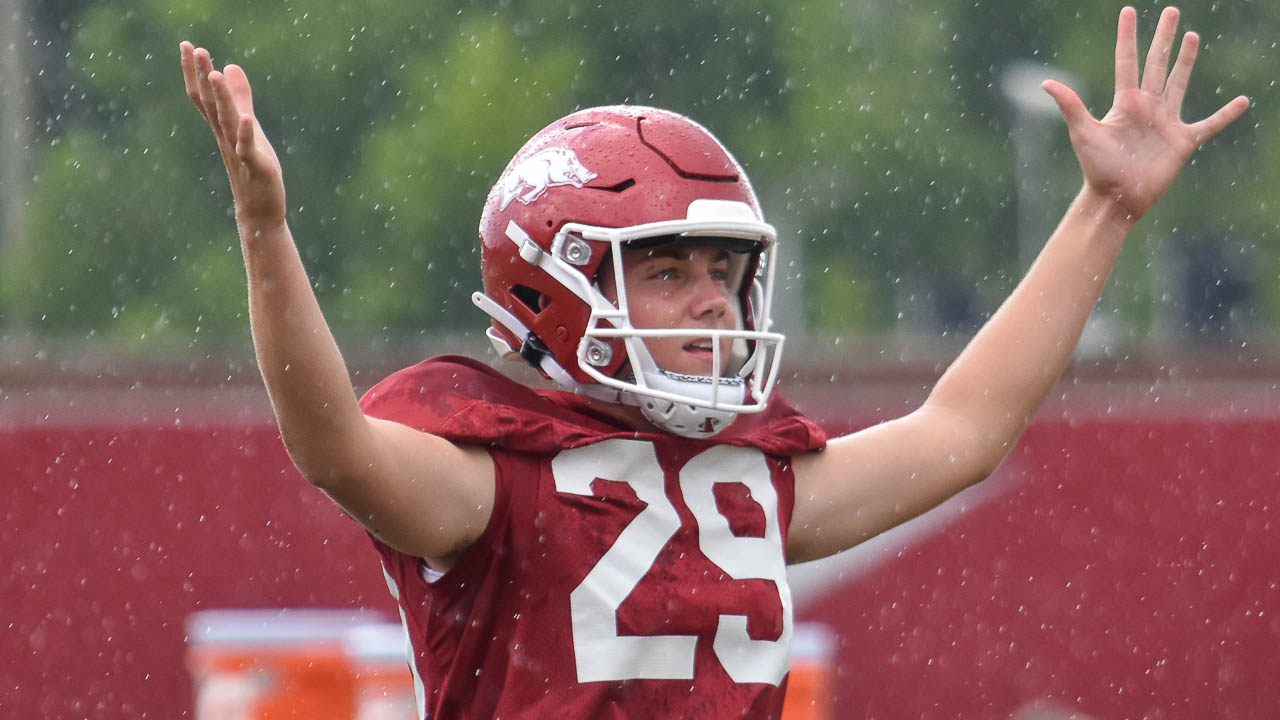 You got the idea back in the spring there was a different vibe around kickers after Cam Little showed up as an early enrollee.

Not a lot of kickers do that … and, honestly, most of the time nobody really notices when they do.

“It kind of helped him get a leg up a little bit,” special teams coach Scott Fountain said after Monday’s practice, mostly in a slow steady rain that lasted all of the media’s availability. “A lot of your freshmen don’t make it here until the summer. It was good to get him here in the spring.”

Sam Pittman was animated after Saturday’s scrimmage talking about Little’s ability to “put the ball between those deals,” he said referring to the uprights on the goalpost. He reportedly had field goals from 37, 46 and 52 yards in that scrimmage.

Nobody has named him the starter, yet, but he’s the only one anybody is talking about in fall camp.

It that’s not a clue then the coaches are really creating a diversion around something special. He has a rhythm in his technique along with a little of the body language you see in the good kickers. It doesn’t mean they will do it in a game, though.

Little came in as a kicker, kickoff man and punter. That may have been too much.

“He really struggled,” Fountain said Monday. “Been trying to figure out what all he could do for us. We really tried to back that up the back part of spring and just have him focus on field goals and kickoffs.”

“He’s making his field goals, more than anything,” said Fountain. “He’s getting great height on the ball. He’s got good operation. His kickoff ability has gotten better.”

The Razorbacks don’t want to fool around on kickoffs worrying about making tackles and relying on all sorts of things that can go wrong. All of the directional junk just adds more variables into a play that can change the game with one little missed tackle.

Part of Little’s improvement may be related to him adding some weight. He put on 18 pounds, which puts him at 185.

Maybe the main thing is he’s been able to do it in simulated pressure-type situations when Pittman will call for a hurry-up to set up a field goal with different types of pressure put on the kicker.

Little has connected on kicks of 50+ yards in fall camps. Considering the Hogs didn’t even try a field goal over 50 yards last year that’s a huge change to the offense.

“It’s very impressive seeing those kinds of kicks,” long-snapper Jordan Silver said after Monday’s practice about what he said was a 50-50 percentage chance of making anyway. “When people can consistently do that, it brings a lot of confidence into the special teams room.”

It also helps the offense.

“A lot of confidence in the coaches to take those kinds of shots right before halftime or just on an opening drive to get points on the board,” Silver said. “It’s very empowering to see those kinds of kicks and that kind of leg strength in our kickers.”

In Monday’s practice, Little had a pressure-packed 35-yarder with the entire team around him.

Fountain said it was just luck of the draw that it was Little’s turn in the rotation when Pittman called for the drill Monday. And also Saturday and a couple of other days.

Somehow that is kinda surprising because the guess here is Pittman knew exactly who was up in the rotation.

It was Little … at least every time we’ve heard about the drill. We won’t hear about the ones that didn’t work, of course.

Pittman said Saturday he has confidence in Little. It sounds like everybody else does, too, including the kicker.

Which is a very good thing to hear about a freshman kicker.