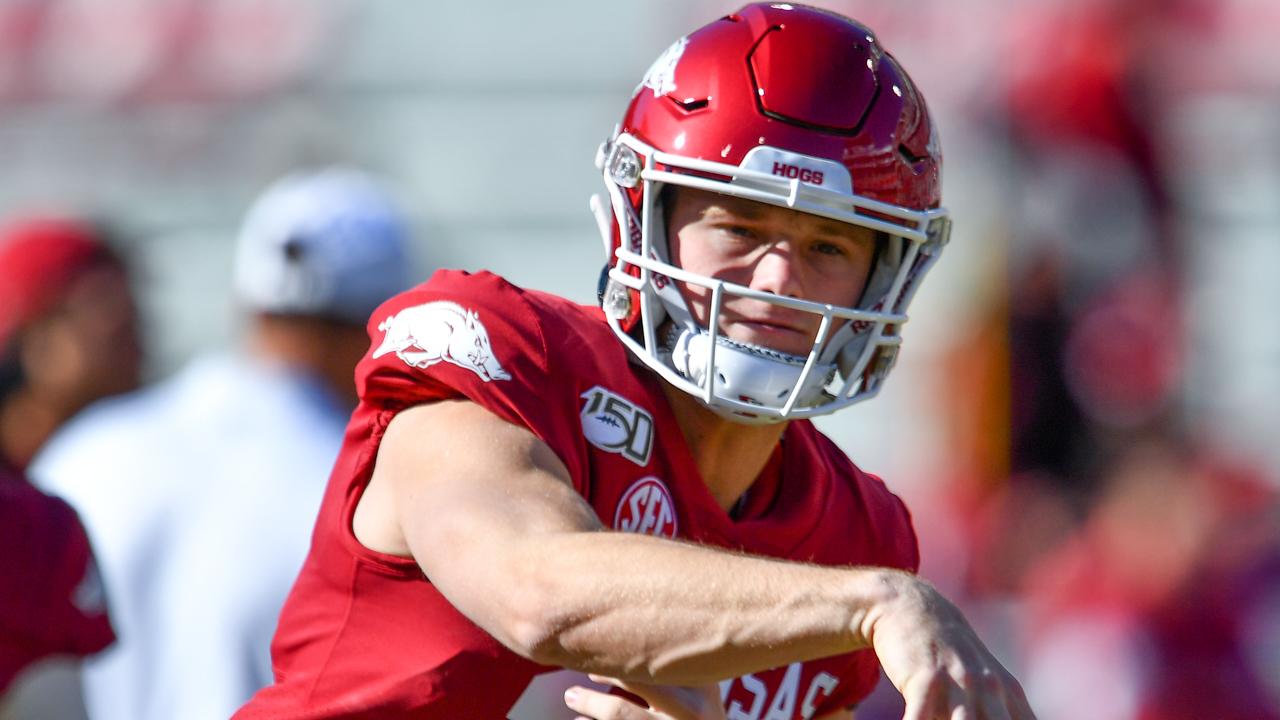 Redshirt junior quarterback Jack Lindsey has done a lot standing around at Arkansas over the past few years.

Maybe more importantly, he’s been in a lot of meetings with different coaches and looked at a ton of film and been practicing against the best of whatever defense the Razorbacks could muster.

Maybe it’s now time to see what he can really do.

Everybody else has shown they aren’t the answer right now.

Lindsey came into the Hogs’ 56-20 loss at LSU on Saturday night and was playing against the Tigers’ starters. True, they weren’t as motivated as back in the first quarter as Ed Orgeron was trying to keep an edge on them as they make a run for the national title, but Lindsey took advantage of that.

On Lindsey’s first play, he ran the option read like it’s supposed to be read and executed, tucked he ball and took off through a gaping hole for a 30-yard run.

What’s especially interesting is that same gaping hole has been there much of the season for the other quarterbacks. They either didn’t have a lot of interest in hitting that hole (preferring to bounce outside a little … right into the defender who’s already out of the play) or mess up the handoff to where everybody can recover.

He made quick decisions, then executed the play and got results.

At this point of what has become a lame duck season for just about everybody, what difference does it make putting him in?

None of the others have proven to be nearly as adept at more phases of the game than Lindsey. Fellow old guy Mike Irwin of Pig Trail Nation and I have talked about that for a couple of years now.

We saw him make throws in practice that had you just looking at somebody wondering how a walk-on holder is making them while the scholarship guys can’t hit water falling out of a boat.

Lindsey clearly knows this offense better than any of the others, having played for another former Razorback quarterback, Zak Clark, at Springdale running something similar.

Offensive coordinator Joe Craddock has talked numerous times about having to tell Lindsey to be quiet and stop answering his questions before any of the other guys in the meetings.

And it took an interim coach to have the guts to put in a walk-on, even though he has looked solid in practices and admittedly knows the offense better?

Maybe that’s why you have a coaching staff headed into the final game of the year sitting on a 4-19 mark and zero league wins in two seasons.

Can Lindsey be the one quarterback who knew how to do what Morris’ offense needed and couldn’t get into the game?

It makes about as much sense as anything else has the last two years.

Jefferson even managed to complete a pass to himself that he should have knocked down and twice gave up rather than going for the extra yard to get a first down. Yes, he’s the most athletic, but his lack of experience against elite competition shows.

Nick Starkel had a cameo appearance against LSU and nothing has changed there while graduate transfer Ben Hicks didn’t even make the trip.

Lindsey pretty much got in by default against the Tigers.

The difference is he made the most of his chance.

Which is something we haven’t seen from other quarterbacks the last two seasons.

If he’s the starter Friday afternoon against Missouri, he would be the eighth starting quarterback in two years. As much as anything that’s why there’s chaos and not a permanent coach in place.

Does Lunney have a better option than Lindsey?