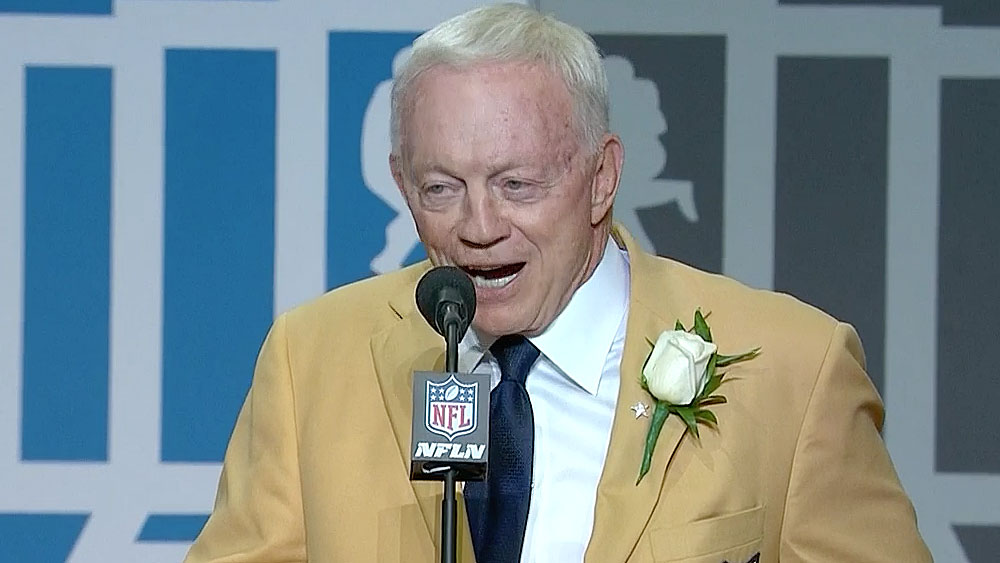 Let’s be honest, you couldn’t have found anyone in February of 1989 that would have guessed Jerry Jones would ever be in the Pro Football Hall of Fame.

Jones, who became the third Arkansas Razorback named to the Hall on Saturday night, was more worried than he let on, even to his closest friends.

And, for the record, none of them would have guessed it then, either.

Some, including Jones himself, were wondering if he had bitten off more than he could chew.

Being in the Dallas media at the time, I told everyone this would be as different from the Tex Schramm-Tom Landry-Gil Brandt regime as night was from day.

Not knowing Jones well, I did know he had virtually zero experience in dealing with the media and his “Ready-FIRE!-Aim” philosophy was going to cause trouble.

“Oh, no, Jerry,” was muttered more than once by me during the Saturday Night Massacre as it became known. That was the infamous press conference, carried live on at least four television stations in Dallas, that launched his ownership tenure.

There was no advice offered. I heard from folks back in Little Rock that DID know him well it would be a waste of time. I simply observed … and commented.

Legendary columnist at The Dallas Morning News, Blackie Sherrod, began instantly referring to Jones and Jimmy Johnson as the Jaybirds.

To be honest, it was classic Dallas hypocrisy in all it’s shining glory. A town that has always been plastic beyond belief, they instantly rallied around Landry, who was fired hours before the infamous press conference.

That wasn’t Jones, by the way. Former owner Bum Bright hated Landry, who ignored him on a couple of social occasions and blew him off in a couple of phone calls. Bright even called into a talk show to question some of Landry’s decisions in 1988 (which officially meant everybody was doing that).

The fans were almost in panic mode for Landry to either be fired or quit. They were calling into the few sports talk shows daily screaming for him to be fired in a much less diplomatic manner than he was.

Bright sold the team to Jones primarily because he was going to bring in Jimmy Johnson to be the coach. He had others offering more money, but they were keeping Landry. That’s how badly Bright hated Landry.

Schramm, who ran the Cowboys however he wanted for 29 years, had simply ignored Bright’s instructions to fire him two years before and gave him a million-dollar salary instead.

Jerry, to his credit, took the heat in the immediate fallout and never complained. I firmly believe that’s why he took credit for a lot of the things later that Jimmy wanted credit for.

Jerry had bled the Cowboys’ success. Jimmy had only sweated.

Most of the success in the 29 years Jones has owned the Cowboys often hasn’t come from his original ideas. No, most of those have come from his family.

Like he did in the oil business, Jones had no fear of pulling the trigger on risky deals. Some didn’t work out.

He paid millions to engineers only to find out the genius behind original Cowboys owner Clint Murchison, who designed every inch of Texas Stadium, using his MIT engineering education.

Jones wanted a retractable roof on the stadium and about 40,000 more seats. He liked the location and really wanted to stay there … until he found out his improvements couldn’t be done.

Murchison had designed the roof on Texas Stadium to never be able to withstand a retractable roof and it would have cost more to completely tear the top off than it was going to cost for a new stadium.

What he inherited was a franchise losing more than $1 million a year. Even 30 years ago, you had to be spending money like a mad man to come up in the red every year. The Cincinnati Bengals, the lowest team in the league in terms of revenue, was netting well over $5 million a year.

Bad real estate deals, poor marketing decisions, having folks on the payroll that drew enormous salaries and perks for basically doing nothing plus giving away nearly 10,000 tickets a game were all areas Jones could deal with immediately.

Even before the new stadium and The Star in Frisco were conceived, Jones had the Cowboys making money hand over fist.

That’s what got him into the Pro Football Hall of Fame.

Which still won’t make him very popular for long if the Cowboys don’t win some playoff games. Dallas will nod and say, “that’s great, but what about the Super Bowl?”

For a franchise now on the longest streak in franchise history of not being in the Super Bowl, winning the last game of the year is starting to become a big deal for a fan base that almost demands championships.

And that’s the next problem Jones has to solve.

A gold jacket and a bust in Canton, Ohio, don’t mean that much to a fan base more interested in blue and silver.

Of course in 1989 you couldn’t find anyone who ever thought Jerry would ever get to a Super Bowl without buying a ticket.

So the smart money isn’t betting against Jerry now.