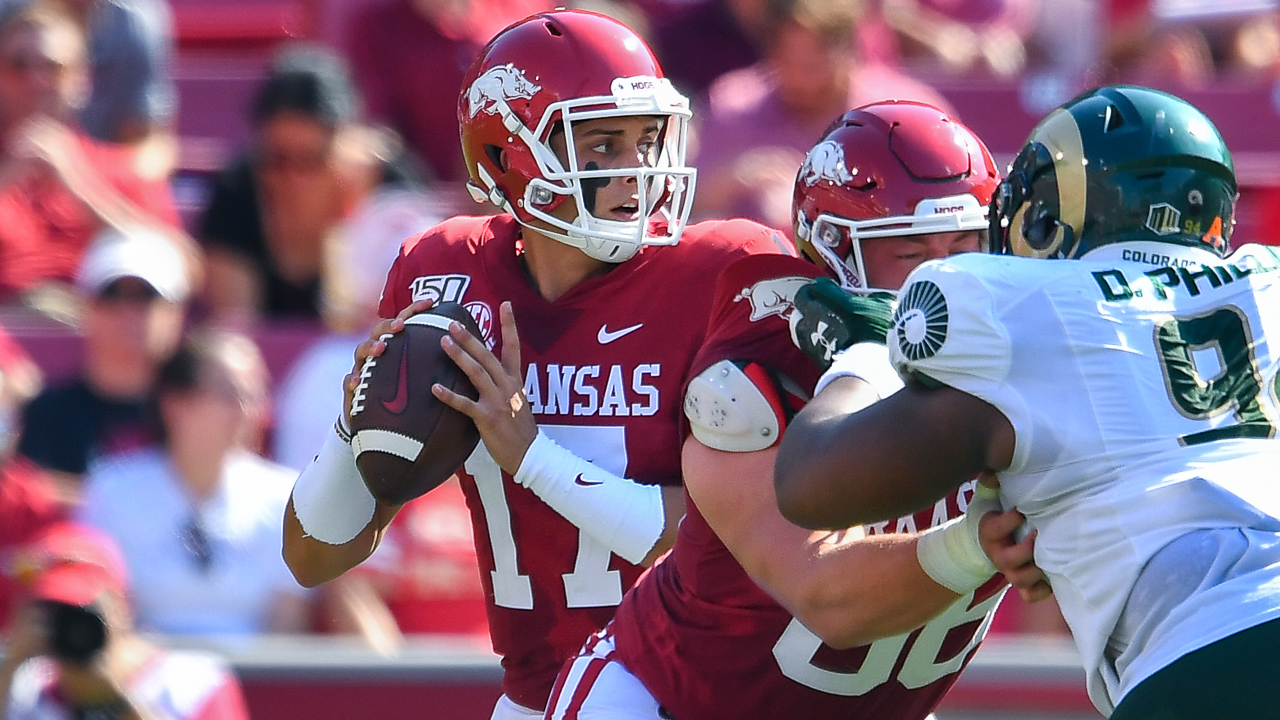 Arkansas has matched the season win total from last year and actually had a big-time offensive explosion, but there will be a lot of fans who wear themselves out focusing on the negatives.

Yeah, there will be a lot of paralysis by analysis after a 55-34 win over Colorado State on Saturday.

“We challenged our guys to respond and I started seeing the response last Saturday night in the locker room,” Chad Morris said immediately after the game, one where the Razorbacks found themselves tied 34-34 headed into the final quarter.

The offense in particular seemed to have found itself. The “Starkel Sparkel” proved to be glittering on a day at Razorback Stadium that had an announced attendance just over 51,000 squirming for three quarters.

Nick Starkel started and put up more points than the first two games combined and a whopping 520 yards of total offense.

The reason people were squirming was the defense gave up 425.

“We made some plays in big moments,” Morris said.

Against the Rams, they allowed just 34 yards in the fourth quarter.

“We didn’t know how to communicate,” was how defensive lineman McTelvin Agim described the past problems compared to Saturday. “This year the leaders have been doing a better job of communicating on the sidelines and making sure everybody is tuned into what we’re trying to do.”

It worked in the fourth quarter because they stopped Colorado State, who started with a 75-yard scoring run on the second play of the game right down the sprinkler heads and kept moving the ball … until the final period.

Starkel found freshman wide receiver Treylon Burks on the Hogs’ first play of the game for 38 yards down the right sideline.

After a pair of runs by Rakeem Boyd (who finished with 122 for the game), Starkel hit Mike Woods for 6, then threw a pass that Trey Knox went up and got for a score from 24 yards out and the game was tied.

That was more what fans have been wanting to see out of Morris’ offense.

And the defense liked it, too.

“It was big,” Agim said later. “You could see the momentum on the sidelines. It was something we could feed off of.”

Safety Kamren Curl has been around for a few of those collapses and part of it are the changes Morris has been trying to instill since he got here.

While the offense found itself in the second half against Ole Miss, the defense got some success in the fourth quarter Saturday when the team needed something from them.

“We responded and we finished,” Morris said. “That was the next part. I wanted to see our guys finish and I thought we did that.”

Except it could. After the explosion in the first period, the second quarter turned into a contest of kicking field goals … and the Hogs won that with Connor Limpert hitting one from 54 and another from 22.

“That kick probably could have went from 65, when it came off his foot it was a rock,” Morris said about the long one. “It was great to see him respond after missing one last week.”

In the second and third quarters, the Rams clawed their way to a tie, mainly when freshman receiver Dante Wright caught a pass from quarterback Pat O’Brien after Hogs safety Myles Mason gambled on an interception and the ball sailed over his head.

Not that Starkel didn’t have opportunities, but he missed some throws.

“Thanks for pointing that out,” Starkel said later … with a smile. “I missed a lot of throws today. We’re going to go to the film, watch it and correct it. There was a lot of stuff there.”

And that is what Razorback fans should be taking from this game.

“We got a lot of mistakes we got to clean up and we all understand that,” Morris said. “We’ll get back in here and work on that tomorrow, but we’re going to enjoy this one tonight.”

Which is what fans should be doing.

There’s a whole week to paralyze themselves by over-analyzing a three-touchdown win.