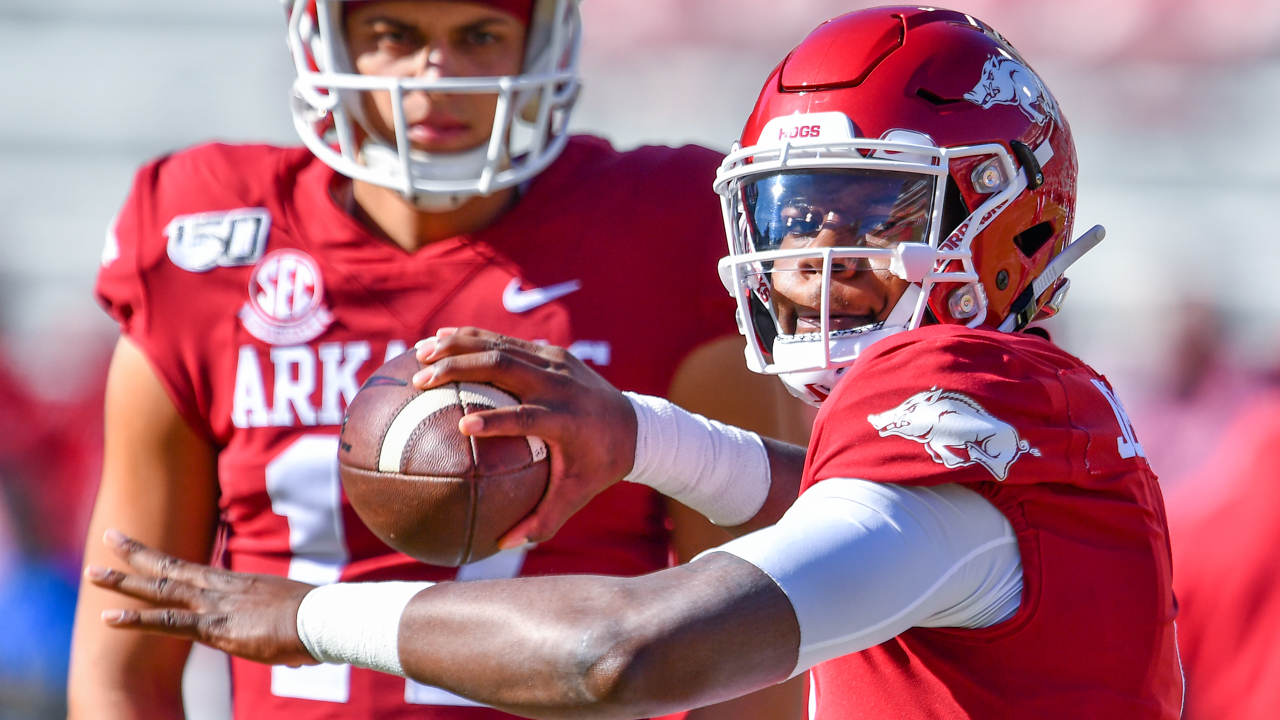 The marketing angle you’ve heard about Friday’s game between Arkansas and Missouri has been the rather entertaining way somebody is trying to invent a rivalry game but it’s really just an inconvience.

The only thing convenient about the Razorbacks playing in the War Memorial dump is the excuse it gives a lot of people to go deer hunting or simply stay home and watch the thing on television.

Nobody will admit it, but everybody from the coaches to the players are just glad this season is coming to a close. The coaches have been told to stay away from the football center until Wednesday, which could mean potential candidates will be in town.

Or it could mean they can start calling about jobs without having to worry about someone listening around the corner.

Take your best guess at what it means. The bottom line is it really doesn’t matter.

With Missouri’s appeal of a bowl ban this season denied last week by the kangaroo court that runs college athletics, their good fortune is they may be playing the only team in the SEC more anxious for the end of the year.

Shoot, CBS is probably starting to wonder why they keep schedling Arkansas instead of anybody else the day after Thanksgiving.

If anything defines the dysfunction around Razorback football the last two years it’s the quarterback situation … and that’s just going to continue to the bitter end Friday.

Freshman K.J. Jefferson may start. Graduate transfer Nick Starkel may start. Original walk-on Jack Lindsey may be the starter. Over two seasons, seven different players have started behind center Ty Clary, who gave up checking a while back.

Oh, sure, there will be a few fans clinging to the hope that maybe, just maybe, this team can summon up that ol’ Razorback pride for one glorious rush to a victory could provide hope after 23 games of misery.

Others figure waiting on a jolly fat guy to come down the chimney on Christmas Eve is going to happen before that.

This is not a rivalry. It probably never will be, despite the hilarious attempts to market it as such by two teams that really haven’t had much of a rival for years.

Missouri had a pretty good one going with Kansas for a few years, but the truth is the Jayhawks will always have Kansas State down the road they are more concerned with.

Razorback fans always wanted a rivalry with Texas, but the fact is even in the heyday of the old Southwest Conference they had Oklahoma and Texas A&M they were more worried about than the Hogs.

The SEC’s expansion has worked out pretty well in football for everybody but Arkansas.

The Aggies came in and beat Alabama and won 10 games their first season. The Tigers won East titles back-to-back in their second and third years in the league.

The Hogs’ record against the two newcomers to the league is 1-12. Let that sink in for a couple of minutes.

Missouri, who many of the so-called experts said would never be competitive in the SEC, has won two division titles and is 57-43 while Texas A&M is 67-35.

Arkansas is 37-61 over that same time frame.

The Hogs are looking for a coach for the second time in two years. It will be the fourth coach since the SEC expanded in 2012 and forever changing the league.

For whatever reasons, Arkansas hasn’t been able to keep up in football.

All of which is why Friday’s game will be a merciful end … regardless of the outcome.

That may not be pretty, either, but the guess here is the Tigers will play with more pride.

Let’s see now, the line gives the home team an automatic three-point advantage, so that means on a neutral field the Rebels would be favored by two points. In the history of this series, the team with the least to play for usually does better. The Bulldogs are trying to get bowl eligible, Ole Miss can’t be … which is why they will win this game.

The Wildcats have somehow managed to get bowl eligible this year as they haven’t quit on Mark Stoops and, indeed, have figured out how to get a little better almost every week. This matchup is a little more heated that most people know, but Kentucky will use whatever home-field edge they get in football.

Gus Malzahn, embattled down on The Plains with an 8-3 record, gets a chance to prove what he can do against a cripple Crimson Tide team. Nick Saban doesn’t have his starting quarterback and a lot of freshmen on defense while Malzahn has maybe the best defense he’s had at Auburn and needing a win in the worst way. Can the Tigers give some clarity to the playoffs … without getting there? Somehow, I think so.

Yes, the Aggies are paying Jimbo Fisher $7.5 million a year for a team sitting on seven wins while LSU pays Ed Orgeron $4 million to have an undefeated team that could be staring at a national title. And some Tigers faithful wanted Fisher instead of Orgeron. This game is personal for Orgeron, who still thinks they were hosed at College Station last year.