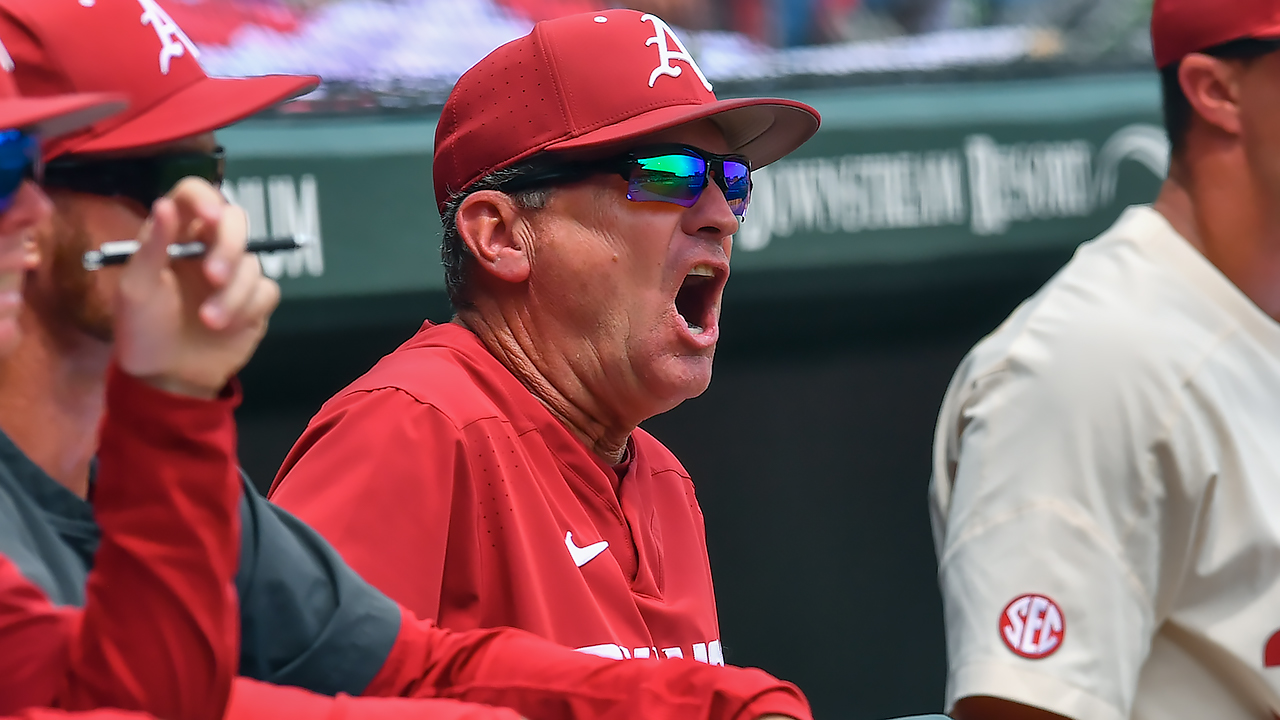 Arkansas hit the ball against Ole Miss’ ace Sunday, but they couldn’t get THE hit when they had runners on base.

They left a complete team — nine players — on base over nine innings. That includes several in scoring position.

Not enough to account for the difference in a 13-5 game, but it did affect momentum.

For a fan base with vivid memories of how close they were to a national title last season, the Razorbacks have put them on pins and needles for a Monday game that, quite simply, is a winner-take-all to go to Omaha.

Both coaches feel good about how their pitching is set up for the finalè. Van Horn and Rebels coach Mike Bianco have had blowout losses, which meant neither one wasted their best relievers.

“We have mostly everyone left,” Van Horn said Sunday.

So does Ole Miss and they have played from behind in series all season.

“We don’t really know what tomorrow is going bring and we have to make sure we do our jobs today and not look past today,” said Ole Miss starting pitcher Doug Nikhazy. “It’s what kept us on our toes and I think we were never really comfortable, not to say we weren’t comfortable. We weren’t ever content.”

Nikhazy gave up a two-run homer to the Hogs’ Dominic Fletcher in the first inning, then the momentum shifted to the Rebels.

Arkansas could never get it back, primarily because Nikhazy last five innings, then gave way to Houston Roth, who gave up just two hits over the final four innings.

“He has pitched really well down the stretch for us, but that is as good as I have seen him against a really good offense,” Bianco said later about Roth.

For freshman pitcher Connor Noland, it was his worst outing since not making it out of the first inning against Vanderbilt early in the conference season.

“It was just one of those outings,” Van Horn said. “He was getting behind hitters.”

The technical part was that he simply couldn’t locate his fastball and the curve wasn’t breaking like it had been in recent outings.

“It wasn’t a good situation for him if he couldn’t get that fastball down,” Van Horn said.

With both teams in good shape with their relievers, it’ll be a pair of freshmen starting. Patrick Wicklander for the Hogs and Gunner Hoglund for the Rebels.

“When he’s on, he’s one of the better young pitchers in our league,” Van Horn said about Wicklander.

“He’s like most of their starters, he has a really good arm,” he said. “He’s a young man who many people didn’t think would make it to college because they thought he’d sign a professional contract. When he’s on, he’s like Wicklander … he’s one of the best young pitchers in the SEC.”

Ole Miss has made a living this season out of dropping the first game, then coming from behind to win the series.

“They don’t look nervous,” was how Bianco described it Sunday. “If you were in the dugout, they look like a team that has won four or five in a row. Somewhere along the line, somewhere in the SEC Tournament, we kind of found that and maybe in the most pressure-packed parts of the game they play loose, and they play with a lot of confidence.”

“Nothing better than game three,” Fletcher said Sunday. “We have a ton of arms ready to go and a lot of confidence in them, so we’re excited.”

So are the fans, but they may be a little more nervous about the whole thing than the Razorbacks are. To be honest, that’s a normal reaction.

You get the feeling this is going to come down to pitching and with both teams starting freshmen, the well-rested staffs on both sides are likely going to come into play.