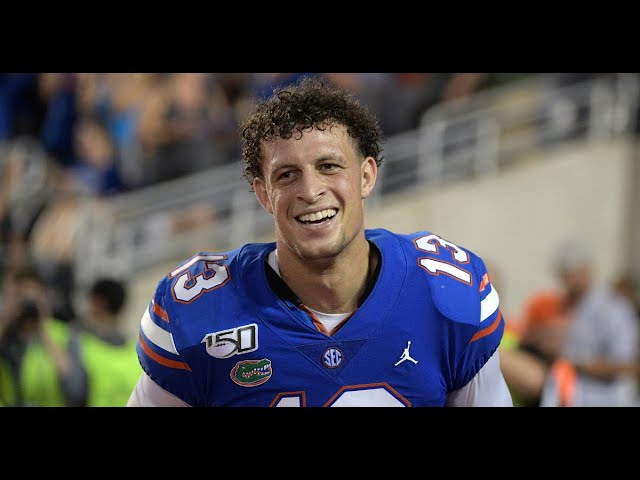 “I’m a Feleipe fan,” Martin said Friday to Derek Ruscin and Zach Arns (Ruscin & Zach) on ESPN Arkansas. “I remember when he threw two or three picks and he tried to beat people with his arm and he was brutalized by some fans.”

“There was a moment for him when they actually booed him and from that moment on he took over that team,” Martin said. “Then he was on the way to having what looked like a good season (2019) before he got hurt.”

That led him to transfer from Florida. Sam Pittman and Kendal Briles got him to Arkansas and Martin, who has seen and talked with Franks more than everybody else in Fayetteville, thinks it’s a good move.

“You’ve got a real winner in the guy,” Martin said. “Sometimes he makes some bad reads, but he can literally put the ball down the field 70 yards. In the right system he’s going to do well.

He got Steve Spurrier’s attention early with his size and athleticism.

“Spurrier told me one time when he saw Feleipe that he wished he’d had a guy 6-5, 245, that could play quarterback when he was at Florida,” Martin said. “I think Feleipe will do well.”

Dealing with the pandemic in Florida

Martin is pretty sure we’ll have football this year, particularly in the South because, well, it has to be.

“We all down here (in Florida) just like you do in Arkansas, we’re gonna WILL a football season,” Martin said Friday afternoon to Derek Ruscin and Zach Arns (Ruscin & Zach) on ESPN Arkansas. “It’s going to have to be one … one way or another.”

Buddy has seen just about everything in his decades of covering sports in Florida and around the country. Like some of us other old-timers, we lived through polio, the Asian Flu, the Hong Kong Flu and several other things that mostly made folks sick and, in some cases, killed them.

Football probably won’t be the same now, but with television you can do things differently and people still get their fix.

You can’t be foolish about it,” Martin said. “What we’re dealing with here is this pandemic is horrible and those of us that have been around long enough to know we’ve been through some things similar to this, but nothing quite like this.

In an area of the country where the SEC has a marketing slogan of “It Just Means More,” and Martin knows that full well.

“You talk about the mental health of people in the SEC and having football is necessary,” he said. “And I mean that seriously because quite a few people, that is what they live for. It means more is certainly true and I know in Arkansas you’ve got a new coach, you’re excited about Feleipe and you should be.”

Martin, who has covered the Gators for years, grew up in Ocala, less than an hour from Gainesville. He’s authored best-selling books on former Florida coaches Steve Spurrier and Urban Meyer.

“I live in the part of Florida where it is still the south,” he said. “Football is so important to what we do … our lifestyle. We’re kind of excited. I think there’s a way to do this, but who knows? We could show up and an outbreak happen and everybody says hold up.”

The SEC announced Friday players could return to “voluntary” workouts on the schools’ campuses … if it’s in line with state rules and regulations. The NCAA had given their approval along the same manner on Wednesday.

Martin also thinks the coronavirus is something we’re going to have to deal with.

“It’s a fact of life,” Martin said. “Coronavirus is here and I’m more cautious. I’ve been in self-quarantine for 60 days. I’m very cautious. We’re going to have to live with it.

“It’s like war. I would not like to lose a single person, but we’re going to see some victims. You’re losing ’em quicker. Every day somebody gets victimized by coronavirus.”

An opportunity to fix college football

A big part of the health crisis is the uncertainty surrounding college football with scheduling and teams trying to figure out what to do.

“It’s time to maybe also fix college football,” Martin said. “There’s some things that need to be fixed. There are things that can be done. These cupcake games have got to go away.”

Yes, he’s well aware how important those big-money games are to the FBC schools.

“The big story is going to have to be the Power 5 teams,” Martin said. “They’ve got to get their act polished up. Get rid of the cupcake games and expand the playoffs. Some of the people running college football are archaic.”

Don’t talk about the existing contracts with the College Football Playoff that limits the playoffs to just four teams for a few more years.

In the world of sports, contracts are the starting point of negotiations to change or re-do them.

“Contracts can be broken,” Martin said. “There are things that can be done. Do something about it. Nothing in the contract says the schedule has to be like they say. There are ways to do this.”

Some folks haven’t been paying attention. College athletics isn’t about the players … or the fans.

“This is about money,” Martin said. “Right now money is king. We’re going to be losing entire programs … some of the colleges, too. This is an emergency. They’ve got to do something about it now.”

One way to do that is clean up the schedules and get rid of the rent-a-wins so many teams play. Nobody wants to watch that on television and, whether fans want to admit it or not, that is what drives the bus these days.

Urgency is the key, Martin said.