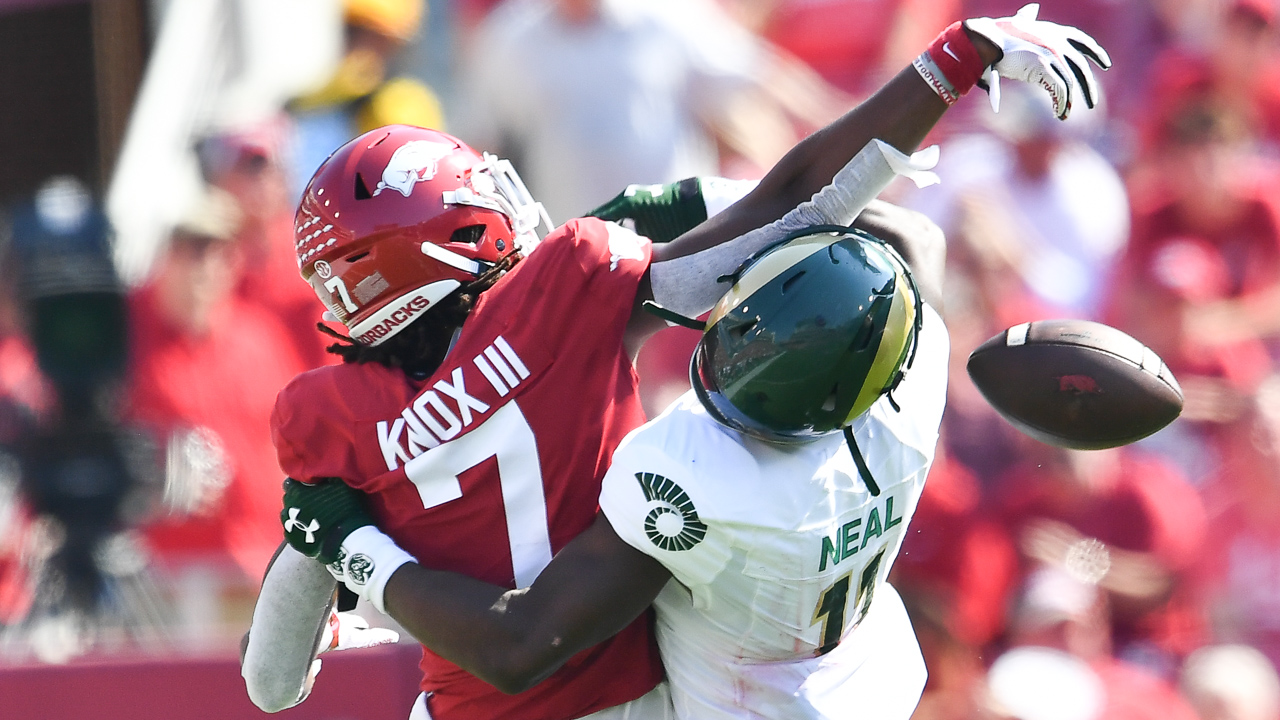 For whatever reasons that don’t really matter right now, the bottom line result is Arkansas is a game and a half into the Nick Starkel Sparkel that seems to have an offense fans have been looking for.

Mainly because it features a lot of deep shots down the field.

As far back as the 1960’s when Frank Broyles was criticized for not throwing the ball enough through 2006, fans loved the deep ball.

To be fair, it wasn’t critiqued much in the Bobby Petrino days and that says about as much of the way Razorback fans have always loved passing, especially when the ball goes downfield.

When Starkel opened the Colorado State going downfield, he didn’t make the initial right choice (Chad Morris thought it should have been an out route), but when Treylon Burks caught it for 38 yards down the right side there was a roar from the stands.

Starkel might just choose the deep ball over the shorter, higher-percentage throw. Fans and the receivers love it.

“He’s a medium-risk, high-reward type of guy, and I think that’s what we need in this type of offense,” freshman wide receiver Trey Knox said earlier this week. “Somebody to take chances, throw the ball downfield and give our playmakers chances.”

That is almost exactly what the legendary Don Coryell used to say. He basically invented the passing game that has now evolved and Petrino brought to Arkansas at St. Louis (when the Cardinals were there) and, later, with San Diego.

Every passing play had multiple reads and Coryell taught first Neil Lomax, then Dan Fouts to work the tree from deep to short and throw it to the first one that looked pretty good.

Norv Turner brought it to Dallas in a slightly modified form in 1990 with Troy Aikman and Michael Irvin both reaching the Hall of Fame doing it.

It’s a state of mind where even when you throw the ball downfield incomplete, it still works. You don’t throw three straight incompletions or you have a problem, but just flinging it down every few plays will have a defense backing up.

Which opens up the running game. Terry Metcalf with the Cardinals and Chuck Muncie with the Chargers put up big-time numbers under Coryell’s system. Emmitt Smith ran to an NFL record in yards with the Cowboys, mostly in the second half after the passing game had opened up a big lead and the defense was worn out.

The guess here is Morris’ offense doesn’t need a quarterback that takes off running much. If you have a talent that can do that, fine, but they are few and far between. It just needs a guy behind center that can move a little and avoid negative-yardage plays with his legs.

“Those deep balls come in big,” Knox said, talking about Starkel. “He was telling me going into that week, ‘If you have the one-on-one, I’m taking the deep ball, so you better get open.’

“I like that because the deep ball is my thing and going deep, I love doing it.”

Yes, a lot of times the receiver is covered and Starkel is throwing it to him anyway, counting that the receiver will find a way to catch the ball. It’s the way the passing game works these days.

Let’s face it, you don’t see a lot of Hall of Fame quarterbacks without usually at least one of their receivers making it in there sooner or later.

“He’s a great quarterback mind,” Knox said. “He knows where he wants to put the ball, and he knows what he wants to do, so you can’t argue with somebody that knows what they’re here to do.”

That’s win games and for the Hogs this year, that’s going to involve a lot of throwing the ball downfield to Knox and Burks.

It’s up to them to get it (unless it’s overthrow, which happened in the second half when Starkel blew a walk-in score to a wide open Burks).

Even when they don’t, it will have an effect on the defense.

Which is how you build up a few wins.