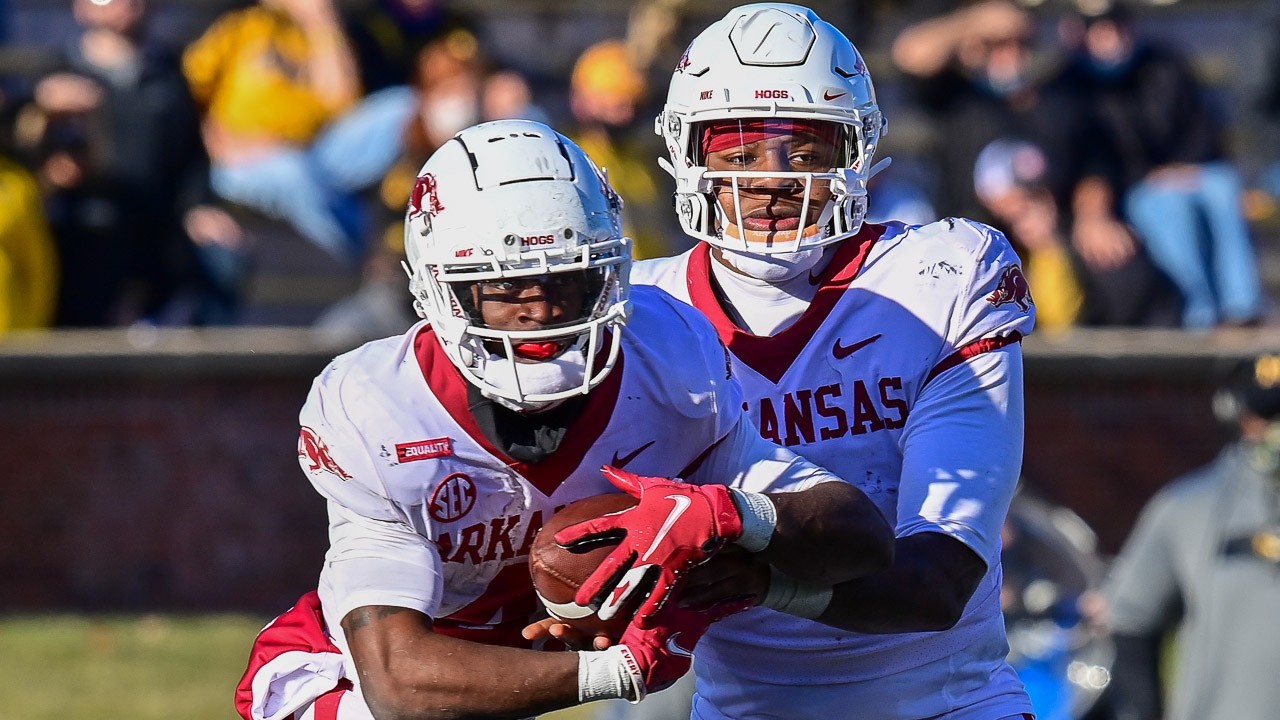 On a day when Arkansas’ offense broke out with a redshirt freshman quarterback, the defense broke down and folded up like a cheap lawn chair.

Despite blowing a fourth-quarter lead for the third time in a five-game losing skid against Missouri, K.J. Jefferson took the Razorbacks 75 yards down the field in 13 plays. Then a miracle two-point conversion pass to Mike Woods put the Hogs in front, 48-47.

For some, that was about as Arkansas of a thing happening as you could imagine.

Except the defense did an even more Arkansas thing by letting the Tigers have a redshirt freshman quarterback of their own go 60 yards in seven plays, setting up a true freshman to kick a game-winning field goal as time expired.

Behind Treylon Burks’ 220 yards of offense and Trelon Smith’s 173 yards, the numbers say the Hogs should have won this game. When the offense scores 48 points in an SEC game, that should be enough to win.

Except the Hogs’ defense wasn’t very good at the start of the season and has had big games when the other team helped them out a little with turnovers.

Missouri didn’t commit any turnovers (neither did the Hogs, by the way), so it came down to a defense missing linebacker Grant Morgan, who basically served as an on-field coordinator, getting everybody in place.

Morgan’s leaving in the third quarter left the Hogs without a rudder as the ship sailed towards some rough water and they weren’t able to figure out what to do about it the rest of the day.

“They beat us up,” Sam Pittman said later. “Their offensive line whipped us on our defensive line.

While Pittman said they’ll get to work and do a better job, well, that’s coach-speak for not having a single answer to do anything about the problem immediately.

Before you start blowing up the comments about being negative, the defense gives the effort and defensive coordinator Barry Odom comes up with some pretty solid plans.

They just don’t have the players in the interior line to turn that into a plan hoping for some mistakes by the other team to have success.

They got all that in wins over Mississippi State, Ole Miss and Tennessee.

By this point of the season, teams have a pretty good take on what to do against the Hogs’ defense and that’s avoid turning the ball over, be patient on offense and just move the sticks.

Oh, and throw on first down. That’s what you do against the Hogs’ style of defense because  it’s not a pressure defense, instead focusing on being ready to pounce on other team’s mistakes.

When Arkansas doesn’t get that and the opponents’ offense doesn’t shoot itself in the foot or make a mistake, they are in trouble.

Arkansas’ offense answered most of the time with Jefferson having a big game that will have fans buzzing, but don’t expect that when a team can prepare a game plan for him.

Missouri didn’t and made Jefferson look like a freshman All-American (18-of-33 for 274 yards and three touchdowns). Now opponents have film of what he can do best and will prepare for him because the Tigers probably didn’t.

The result will be anticipation for the Alabama game, but not much hope. The Crimson Tide are playing for the College Football Playoff.

The Hogs are just trying to finish this weird year.

A season that has shown marked improvement. In his first year Pittman has nearly doubled the winning percentage, winning a third of the games played. The previous three years produced a 22% win percentage (17% the last two seasons).

And if they don’t fix the line of scrimmage (and special teams) issues, it’s about as good as it’s gonna get.

Offensive coordinator Kendal Briles knows he’s just about got to hang 50 on people to win games. That’s a tall order, but apparently not as tall as suspected earlier in the season.

The regular season finale probably won’t be a win. The Hogs couldn’t beat Alabama if everything fell perfectly.

Which means all that’s left to hope for is a bowl game … or next sesaon.

And that doesn’t bode well for anybody.