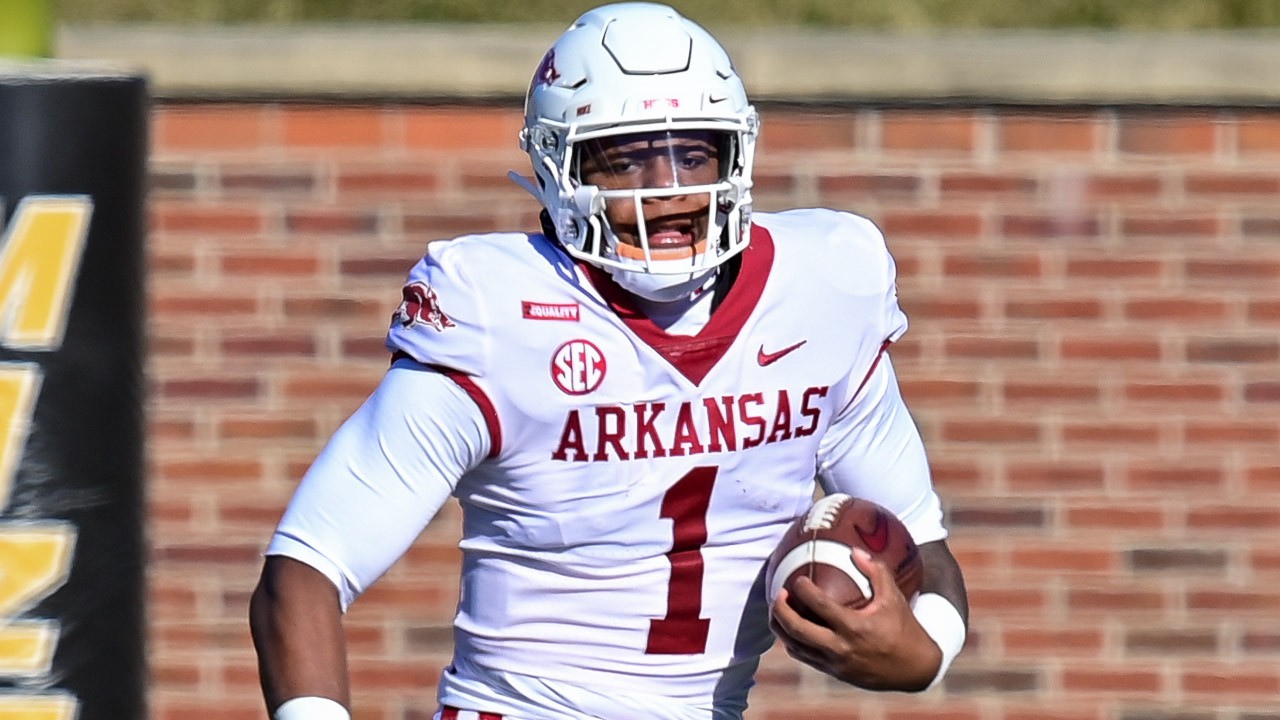 Just a few days from the start of fall camp, everybody is playing the guessing game around Arkansas football … which is normal.

About the only thing certain in August is we don’t know how things will be in November.

Facing the toughest schedule in the conference (primarily because the Razorbacks aren’t on their own schedule), some think they will win enough to get to a bowl game, others aren’t even sure they’ll win a game in the SEC.

One thing we do know is the Hogs might not be sneaking up on anybody this year because Sam Pittman showed in last year’s 3-7 season he can get players to give a good effort. He just ran out of players in a crazy November where they could have picked up two or three more wins.

But there are questions, though. How those are answered through the course of a dozen games will be in direct proportion to the record.

Can KJ get the job done at quarterback?

It’s the most important position on the field these days and Arkansas is going with a guy that looked good in his only real appearance and that didn’t end up as a win.

The Missouri loss wasn’t his fault. He got them within 43 seconds of a win.

But the facts are the facts and last year has absolutely nothing to do with this season. Lou Holtz used to harp on that for years and it turned out to be pretty accurate.

Jefferson showed flashes against the Tigers, but the Hogs prepared him the week of the game while ducking every possible question about Feleipe Franks’ availability.

The Tigers didn’t have a lot of preparation for him.

Now teams have one entire game to study and you learn over decades of watching it don’t base anything on one semi-surprising appearance by a quarterback because defensive preparation can change things.

Will another wide receiver take the pressure off Burks?

Fellow former Warren Lumberjack Treylon Burks is the marquee wide receiver on this team but opponents can shut down an offense with only one option to catch passes.

De’Vion Warren has made plays before, but Burks had nearly twice as many catches as everybody else combined. Trey Knox all but disappeared last season after a promising freshman year and that has to change.

The tight ends, Blake Kern and Hudson Henry, could help some. But they’ve got to do. They had just 36 catches between them all year.

Has the defensive line improved pass rush this year?

Too often last season the Hogs’ defensive pass rush required bringing everybody except the cheerleaders to pressure passers.

The front couldn’t get any sort of consistent rush. Given enough time any quarterback is going to complete passes because there’s not enough defensive backs who can stay with every possible receiver forever.

New faces bring hope there will be some new pass rush up front.

Is it possible the special teams can really be special?

We’re not talking about the kickers and punters here because they are just one part in the entire process. Much like the quarterback, they get the blame when one of the other 10 on the field don’t do their job.

Punt returns were virtually non-existent. The Hogs only returned four and it was clear the theory was fair catch as many as possible and reduce mistakes. It also reduced the possibilities of big plays and there were none.

Problems last year weren’t easy to pinpoint but it was a complete team failure on too many occasions. Blocking on returns and avoiding blocks on kicks happened with too much frequency.

We’ll see how it plays out.

Has this team developed the depth necessary?

Teams in the SEC don’t win just on the 22 starters, but how good are the backups?

That’s a huge question for the Hogs and there’s no way to know how that plays out, despite Pittman’s assurances. He’s not going to tell us this team doesn’t have any depth.

Arkansas’ starters can compete with anybody or they wouldn’t be on the team.

How good is everybody else because we’re going to find out. Injuries, someone suddenly developing into a much better play and even the transfer portal play a role nobody can predict.

Which is why we don’t have the answers now.

Check back about Halloween … at the earliest.