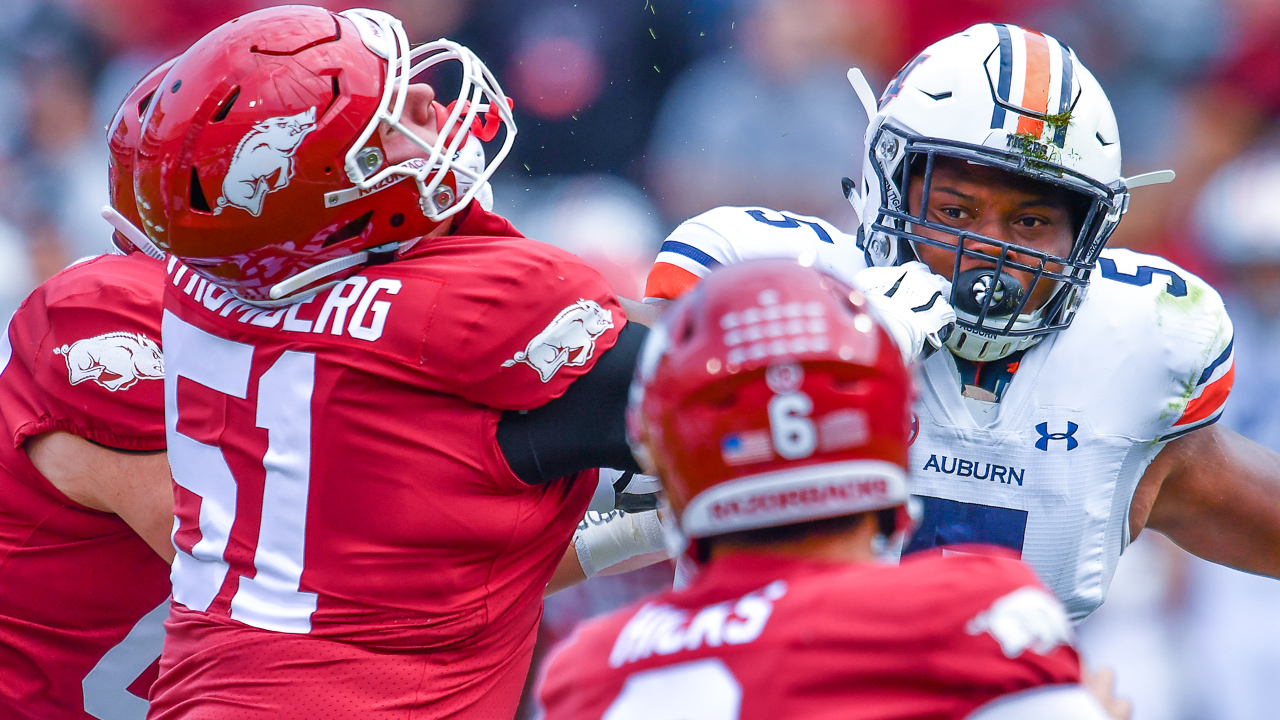 If you think all of the problems with Arkansas football is in the coaching, Saturday’s 51-10 loss to No. 11 Auburn raises the alternative.

It may be as glaring of a talent differential as anything seen with the Razorbacks in modern history.

Especially on the offensive and defensive interior.

When Hogs tackle Dalton Wagner was knocked backwards into running back Rakeem Boyd to blow up a sweep that should have gotten your attention.

The Tigers’ seniors and juniors just simply overwhelmed Arkansas’ linemen … on both sides of the ball. The best comparison that comes to mind is watching a junior varsity team with 9th and 10th graders playing a state championship-caliber team.

To a certain extent that’s the hand Chad Morris is trying to play in the SEC West.

Oh, sure, there are questions about the coaching. It’s starting to be a valid question about the mess at quarterback Morris has somehow not been able to figure out for two seasons now.

Morris doesnt want to put freshman K.J. Jefferson or redshirt freshman John Stephen Jones on the field in what would amount to a no-win situation.

A valid argument can be made for that.

Don’t throw Bo Nix at Auburn or some of these other freshmen quarterbacks that have had success recently. They were playing with four and five-year offensive linemen and others.

Which brings up the whole problem with the Razorbacks. The previous regime basically quit bringing in or developing linemen on both sides of the ball in SEC-type numbers about 2015.

It has had a ripple effect throughout the rest of the team. Let’s face it, if you’re not very good inside the box, you’re going to have a heckuva time being good outside of it.

You simply can’t develop the linemen that quickly, especially on offense.

And if you think play-calling is going to make that big of a difference you’re wrong. That’s the most over-rated part of football that fans think is such a big deal.

“We’s just got to executive better,” Morris said in the post-mortem Saturday.

That’s coach-speak for, well, the other team was simply better. Calling the right plays doesn’t count for squat if it’s not executed correctly or the other tam has the talent to just blow the play up before it can get going.

“We ran a lot of RPO’s today,” Morris said. “We gotta make sure we execute them right.”

For a fan base that is exhausted with mediocrity that has lapsed into futility, they want somebody to blame. Patience is in short supply, along with an increasing lack of interest.

Saturday’s ticket distribution was 54,619 and quite a few of those didn’t bother showing up. The rain early didn’t help and the dark cloud hanging over the problem probably sealed the deal for a lot of fans who had other things to do and a television that worked.

This was a physical mismatch combined with ridiculously poor timing for the Hogs. The Tigers were coming off a bye week following their loss to Florida and were completely prepared.

It wasn’t so much the Razorbacks weren’t prepared as they simply couldn’t do anything about it.

“We knew they were very big and physical up front,” Morris said.

And fast. Morris has talked about how they’ve got to get more speed and you either have it or you’re chasing it and the Hogs were chasing Saturday.

Yeah, there may be coaching issues, but it’s anybody’s guess how much of that is caused by the talent gap.

Remember, the last time Auburn had lines with this much experience and the talent, the Hogs put 43 points on the board and still got beat by 22 with The Great Playmaker in charge.

Great coaching doesn’t beat better talent very often. That will be on display again next week against Alabama.

That’s not good news but it’s playing the hand you’ve got.

“The young men in the locker room are gonna stay in the fight,” Morris said Saturday. “The only thing you can do is go back to work. You keep developing and you recruit.

“I knew the league was tough. We’d played against some of these teams. But I keep saying it’s not who we play, it’s how we play.”

Which, I guess, is about all he could say Saturday.