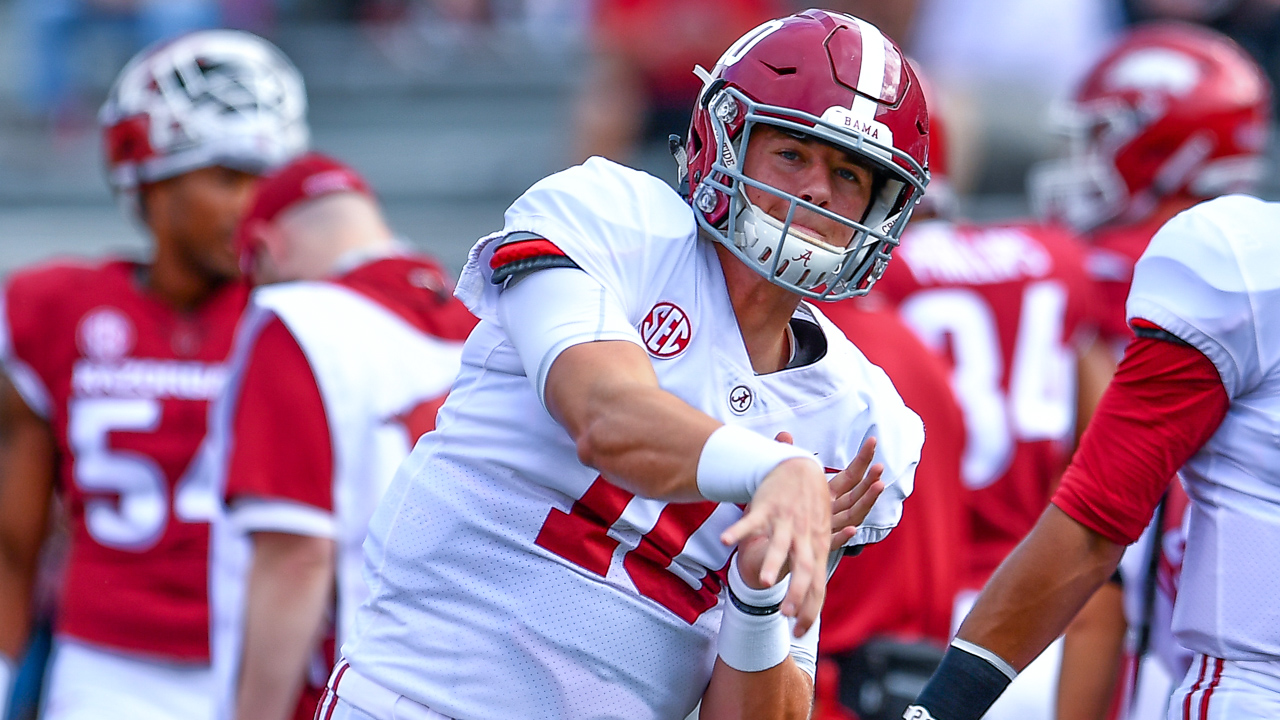 It’s Arkansas’ luck the last few years that Alabama loses it’s star quarterback a week ahead of their matchup and it doesn’t appear there’s a thing the Razorbacks can do to take advantage.

Yeah, that may just about perfectly sum up the state of things for the Hogs these days. They are creating a new depth of bad for the SEC, not getting a league win now for a year and a half.

Tua Tagovailoa won’t be suiting up for the top-ranked Crimson Tide with an ankle injury similar to what he suffered last year in the SEC Championship game.

He really wasn’t back at full speed for the title game blowout, but Nick Saban didn’t go with Jalen Hurts in that game, which may or may not played a role in Hurts now becoming one of the leaders in the race for the Heisman Trophy this year … playing for Oklahoma.

Mac Jones will be the starter for the Tide and it will be his first start after a fine career with little pressure and less playing time.

But there’s probably nothing Arkansas can do to take advantage of it.

Alabama has enough everywhere else that it shouldn’t be close, but then again I didn’t think the game between Missouri and Vanderbilt last week would be, either … which promptly led to the Commodores winning the game going away.

Yes, it’s been that kind of year. Let’s face it, Tennessee actually made things interesting against the Tide last week until, well, they reverted to form. Let’s face it, if there’s a team that can mess up as spectacular as the Hogs’ offense it’s the Vols.

They were headed for a score to make it a one-score game midway through the fourth quarter, fumbled into the end zone and watched Bama’s Trevon Diggs take it over 100 yards to the other end zone and blow it open.

The Hogs were busy getting steamrolled by Auburn.

Alabama fans are nervous. Razorback fans are just glad this one’s in Tuscaloosa so they don’t have to make up excuses for not going to the game.

While Chad Morris, who promised fans he wouldn’t let them down if they would give him a chance when he was hired, has a large percentage who want to run him out of town.

Hey, at least when John L. Smith was filling in after Bobby Petrino flew through the handlebars the offense could move up and down the field pretty well and actually won a couple of SEC games.

Morris has coached a team last year that probably should have been at least 5-7 into a 2-10 disaster. They may be headed into that territory again.

There are some that are floating the story that Morris convinced athletics director Hunter Yurachek last year he was going to have to basically get rid of a bunch of holdover players and completely rebuild.

Apparently Yurachek agreed. Morris is coaching like someone who knows he’s safe this year. Whether his staff is or not isn’t known at this point.

A close road game in Tuscaloosa might buy Morris some breathing room, but only a week because right now the Mississippi State game on homecoming weekend looks like it should be competitive.

Whether Morris is in a position where he has to win an SEC game to keep his job or not is something I’m not sure even Yurachek even knows at this point.

What we do know is they won’t win against Alabama this week … but it might not be the blowout folks expect.

Last week, Peter Morgan and I were both 5-1 (thanks to Missouri for messing up a perfect weekend), so he continues to plod along two games behind.

If there’s a team in the SEC that has a fan base that is on par with the Hogs’ bi-polar Lunatic Fringe, it’s the Bulldogs. They are ready to run Joe Moorhead out of town, mainly because they can’t figure out how they put four of the first 44 players into the NFL Draft back in April and still manage to go 7-5 in the regular season. At least the ‘Dawgs have a league win, but they won’t get another one this weekend.

Back in August, nobody figured this game would see LSU with this big of a favorite position, even at home. Auburn somehow managed to not impress many people with a 51-10 win over Arkansas last week, but that probably says more about the Hogs than Gus Malzahn’s team. How crazy is this year? LSU quarterback Joe Burrow is the leader for the Heisman.

Good grief, even the Vols have managed to win an SEC game this year and they are terrible. Of course, they are in the East, which helps there. South Carolina beat Georgia, somehow. Now they will go to 3-3 on the season. None of this is helping Morris’ case at Arkansas, by the way, because most fans figure being as good as the bottom feeders in the East isn’t THAT hard to accomplish.

Well, two weeks ago you figured this game was a leading contender to go into the Easy Pickings section, but not after Kelly Bryant led the Tigers to a loss against Vandy. The Wildcats even have a league win, beating Arkansas using a wide receiver at quarterback, but he won’t win this week … unless Missouri is really that bad.