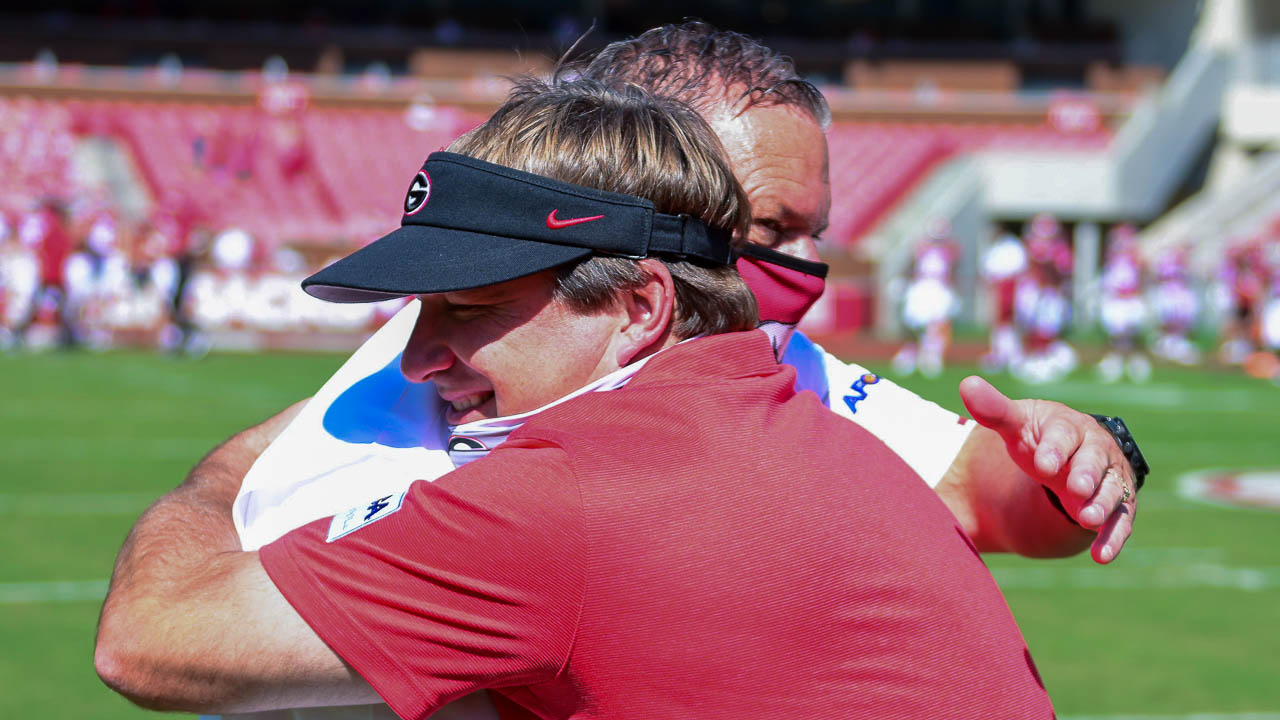 It is the biggest game of the year Saturday when No. 8 Arkansas travels to second-ranked Georgia.

Every week seems to bringing the biggest game yet. Whether next week’s game against Ole Miss is bigger than this one depends completely on what happens this weekend.

The Rebels go to Alabama. We’ll get to that further down.

Neither side has given the other any bulletin board material, which is the norm these days in college athletics. Good grief, it is to the point you can almost predict what clichés will be used from week to week.

Kirby Smart respects what Sam Pittman has done four games into his former assistant’s second season. Pittman is grateful to Smart and learned a lot.

Which is exactly why I raise a red flag every time I hear it when a former assistant plays the guy he worked years under. Nobody ever points out the student knows what HE learned from the teacher … but he didn’t learn everything the TEACHER knows.

Pittman worked for a lot more than Smart so he didn’t learn everything he knows there, but it was the last coach he worked under and he wasn’t in a program that had that kind of success (44-12 over four seasons, 36-7 the last three years with a national championship appearance).

All of that’s the game behind the game.

On the field, Georgia is the most talented team the Razorbacks have seen this year. They are, obviously, the best-coached. Pittman knows that because he was part of that group for years.

Nobody is picking the Hogs to win this game. Okay, some of you fans are making that pick but that’s hope more than an objective analysis.

Barry Odom will likely have a defensive game plan to slow down the Bulldogs’ offense. They are going to be trying to run first, then pass … who doesn’t at least say they’re trying to do that?

From here, though, the most important thing about this game is how well the Hogs’ offense does against Georgia’s defense. Can they get the job done on the ground and can the passing game make the big plays it’s had in the last two games?

Don’t be surprised if this game is closer than the 18.5-point spread. It wouldn’t be shocking if the Bulldogs win by three touchdowns and everybody has to re-adjust their expectations.

If Arkansas wins it will be shocking. Everybody could throw away their August predictions which many have already done (myself included).

Just remember, it gets easier after this.

Pete Morgan is sitting on a two-game lead with over half the season left. But then again he doesn’t look at this (he says) so we’re getting close to the time to just quit fooling around and giving him hope.

Tennessee at Missouri (-3): The Vols are having a learning experience under first-year coach Josh Heupel while Eli Drinkwitz has a team that lost to Boston College last week. If this game was in Knoxville, I’d take the Vols … but it’s not. Missouri 35, Tennessee 31

Ole Miss at Alabama (-14.5): The Rebels may be looking past the Crimson Tide to the matchup with the Hogs coming to Oxford next week, right? Nah, that’s Arkansas’ edge next week. The over-under on this game is around 80 points, which is a ridiculously high total for an Alabama game. Sorry, but I’m not picking against Nick Saban until he gives me a reason to do that. Alabama 49, Ole Miss 24 (with Saban post-game complaining about defense)

Troy at South Carolina (-6.5): The Gamecocks are struggling breaking in a new coach. Troy, though, hasn’t been the surprising trap game for SEC teams in recent years and probably won’t be in this one, either. South Carolina 28, Troy 17

Florida (-7.5) at Kentucky: Dan Mullen is putting together a pretty good team down in Gainesville. The Wildcats are undefeated, but that comes to a screeching halt Saturday. Florida 34, Kentucky 14

UConn at Vanderbilt (-14.5): UConn keeps inventing new ways to lose games. The Commodores can’t figure out how to win one. The Huskies came close a week ago, but I’m not going to take them over an SEC team. Vanderbilt 27, UConn 21

Auburn at LSU (-3): Down on the Plains they are already screaming for Brian Harsin’s head on a platter. Apparently the honeymoon doesn’t last long. That happens when the last coach they hired played in the national championship game his first season. Auburn won’t be with a new quarterback that LSU is familiar with. LSU 31, Auburn 21