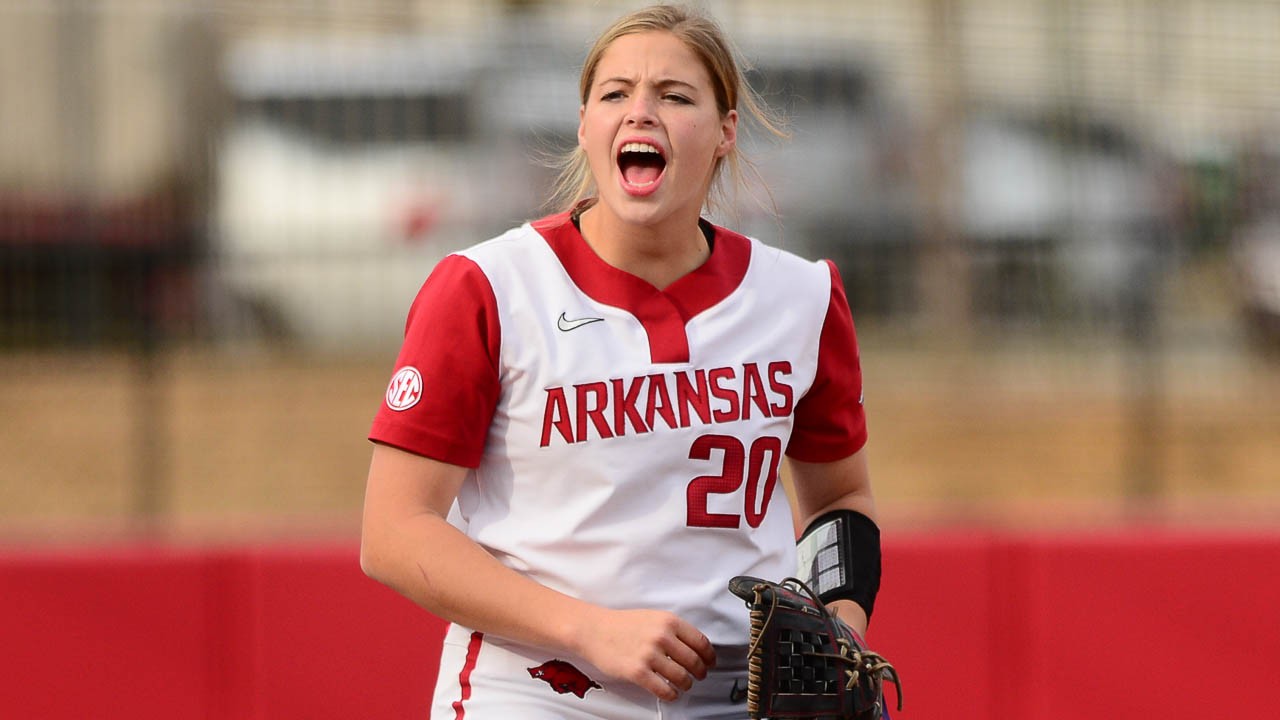 Arkansas continues its homestand this weekend, playing five games as part of the Wooo Pig Classic in the final non-conference weekend tournament of the season.

All five of the No. 20 Razorbacks games will air on SEC Network+.

The Hogs blew away their Razorback Invitational competition, winning three of six games in run-rule fashion.

Redshirt junior pitcher Mary Haff threw the ninth no-hitter in program history and the second of her career in a 9-0 (5 inning) win over Texas Tech. She was one error away from a perfect game. Arkansas outscored the Red Raiders, 17-0, in two games.

Arkansas also picked up two wins against North Dakota State (9-0 and 5-0) and Southeast Missouri (9-3 and 6-3). Infielder Braxton Burnside had an ultra-impressive week hitting .458 with six homers, 11 RBI and 16 runs scored.

Over her last three games, Burnside clobbered five home runs and had two-homer games against Southeast Missouri and Texas Tech.

The Razorbacks have won their last 10 games.

The Razorbacks have been on a power surge to begin the season, totaling 33 home runs over their first 13 games to lead the SEC and rank second nationally.

Among teams that have played at least 10 games, Arkansas ranks second in home runs per game (2.54) behind Oklahoma (12 games, 44 home runs, 3.67 per game). Over their last eight games, the Razorbacks blasted 22 bombs with Burnside’s six leading the charge.

In the Razorback Invitational finale against Texas Tech, Burnside hit the second of her two homers an estimated 299 feet into the Bogle Park left field parking lot.

Designated player Linnie Malkin is second on the team with six, and true freshman infielder Hannah Gammill has added five. Nine-hole hitter Keely Huffine has provided pop at the bottom of the lineup with four bombs.

The Razorbacks also set a program record hitting four homers in the first inning. All but one of Arkansas’ hits in the five-inning run-rule game was a home run.

After its 8-0 week, Arkansas climbed four spots in the ESPN.com-USA Softball Poll to No. 20. The Razorbacks are also ranked No. 20 in the USA Today/NFCA Coaches’ Poll.

Currently, the D1Softball.com Poll has given the Razorbacks their highest ranking of the season at No. 15.

• Outfielder Hannah McEwen has reached base in every game this season and leads the team in on base percentage (.585) and walks (14).

• Gibson paces the team in batting average (.429), hits (21) and doubles (6). She ranks fourth in the SEC and seventh nationally in hits.

• Malkin’s 18 RBI leads the team and ranks fourth in the SEC and 10th in the country.

• Haff is tied for the nation’s lead with six victories. She is also sixth in the SEC with a 0.68 ERA.

Drake (2-6): Arkansas has a 10-6 lead in the all-time series, but the Bulldogs have won the last two meetings in 2019 and 2016. The teams have met exclusively at Bogle Park the last eight meetings with the Hogs holding a 5-3 mark. Last weekend, the Bulldogs were swept in a three-game series at Kansas City.

Kansas (5-4): Arkansas swept a March. 10 doubleheader last season at Bogle Park against the Jayhawks in the last day of the season, 3-2, and 1-0, both in walk-off fashion. Ryan Jackson was hit by a pitch in game one, and catcher Kayla Green launched a walk-off home run in game two. The Razorbacks are 9-17 all-time against Kansas but have won three of the last four meetings. KU went 4-1 last weekend at the UTSA Tournament, picking up two wins against UTA and single wins against Texas A&M-Corpus Christi and the host Roadrunners.

Northwestern State (5-2): The Razorbacks enter the weekend on a seven-game winning streak against the Lady Demons and are 8-6 all-time. Arkansas last defeated Northwestern State, 8-2, in 2019. The Lady Demons had their first two non-conference tournaments canceled this season and went 3-2 in their last weekend at the South Alabama Invitational defeating SIU-Edwardsville (two times) and Middle Tennessee while also falling to Missouri and South Alabama.