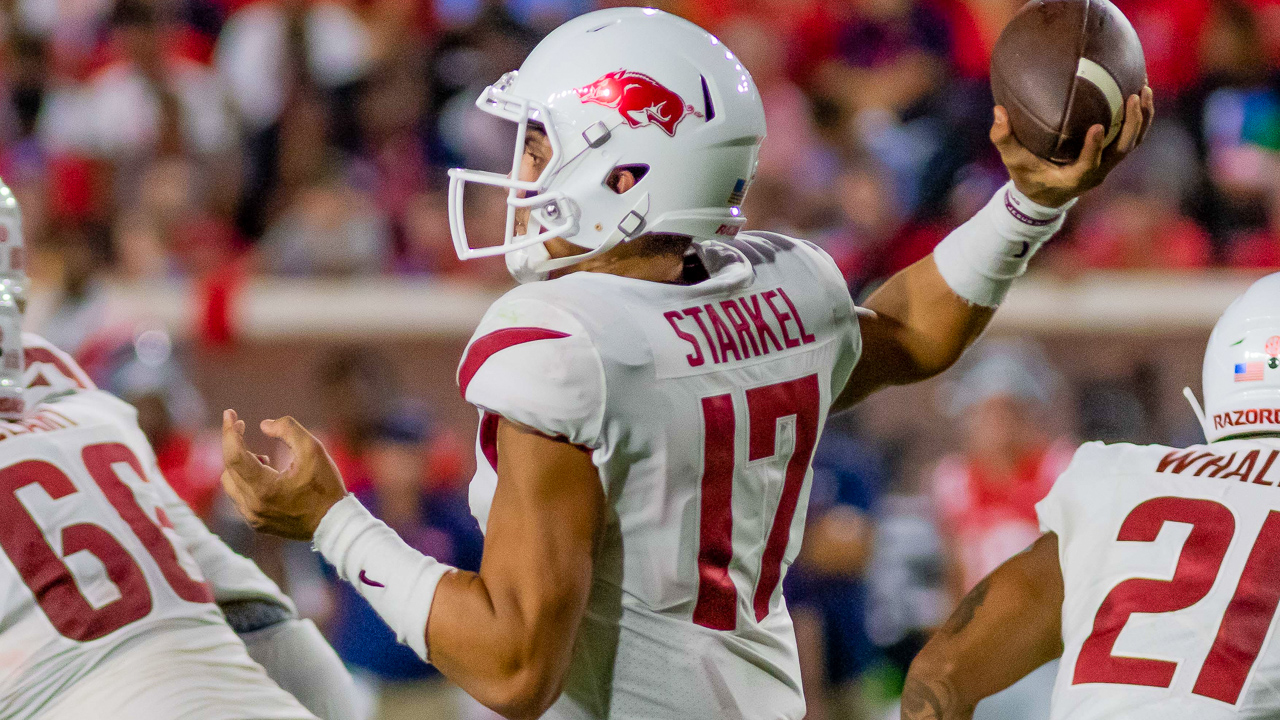 Based on most of what I’ve seen around, there are a lot of folks ready for Chad Morris to just go ahead and put the Razorback offense into what they hope is the “Starkel Sparkel.”

Graduate transfer Nick Starkel replaced another graduate transfer, Ben Hicks, in the second half of a 31-17 loss to Ole Miss on Saturday night and a lot of people felt it was considerably past time.

Is he really ready to play this little game once again? Last year was a revolving door at times, but now it may appear to be more like roulette.

“We’re just going to step back from tonight, get in there tomorrow and re-evalute things and make a decision that’s what’s best for this football team,” he said after the loss.

So, that means you’re not settled on a quarterback after you thought you were, right?

“I didn’t say that,” Morris said. “I said we’d go back and re-evaluate and see and we’ll make a decision at that point.”

It’s almost like Morris doesn’t want to believe his own lyin’ eyes. He wanted to get back to Fayetteville and look at the video … and I’m assuming that’s to simply confirm what he already saw.

Morris may want to take a breath because it’s probably past time to name a permanent starter and ride with him — good or bad — and tell everybody that’s the way it is. This isn’t a high school program where the coach can play little public relations games and have it work out well.

“We’re just going to step back from tonight,” he said later, “get in there tomorrow, re-evalute things and make a decision that’s best for this football team.”

Which is coachspeak for either not having a clue what he wants to do or is torn between deciding what to do.

Neither are exactly inspiring to a fan base that has passed restless and is now in full-blown worry.

Don’t ask me what the criteria is because I don’t have a clue. We’ve heard since spring they are looking for consistency and the quarterback that can put the team in the end zone the most often.

In scrimmages, Morris and offensive coordinator Joe Craddock told us that was John Stephen Jones, but he hasn’t done anything the past two weeks but go through pregame warmups and keep Jack Lindsey company on the sidelines.

If what we have been told is accurate, wouldn’t we at least see Jones for a series or two?

Everybody has followed Morris’ lead on this whole quarterback thing and there is nothing to indicate it’s anybody even under consideration other than the two guys we’ve seen in the first two games.

Based on what we’ve been told, it would have been logical to see Jones in a game. Is this a case of falling in love with somebody’s arm, ignoring whether he can get the team in the end zone or not?

There is another problem Morris may be on the verge of finding out the hard way.

Playing the Quarterback Roulette seldom works out well for coaches. It’s usually the coach that ends up with the bullet to the head.

For now, though, he’s trying to avoid a repeat situation with Colorado State, who will show up in Fayetteville before about 45,000 people on what is likely to be another hot day.

“A year ago this happened to us and we let one team beat us a few times,” Morris said. “It’s all about a response.”

Exactly who will be leading that response is still up for debate … apparently.