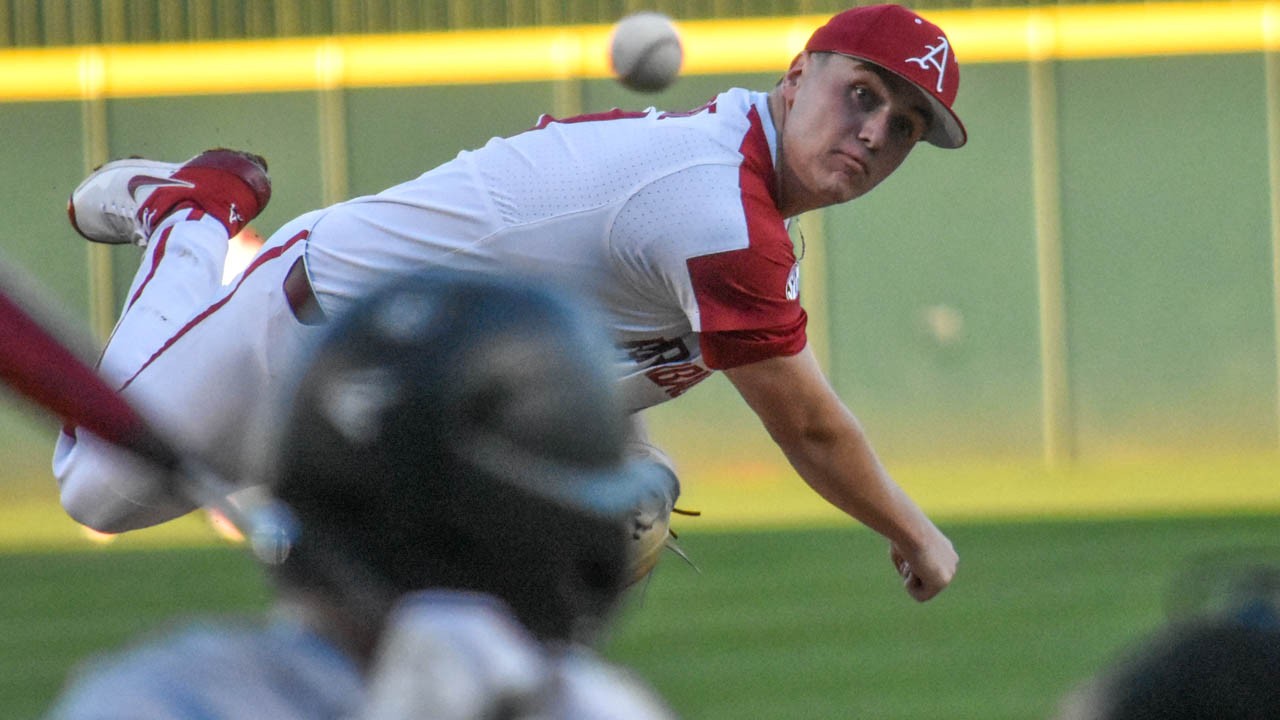 FAYETTEVILLE, Ark. — Tied for first atop the SEC West with three games left to play in the regular season, No. 7 Arkansas (37-14, 17-10 SEC) travels to Alabama (27-24, 10-16 SEC) this weekend with an opportunity to clinch its fourth consecutive division title.

The series between the Razorbacks and Crimson Tide gets underway at 6 p.m. tonight on SEC Network+ from Sewell–Thomas Stadium in Tuscaloosa, Ala.

Friday’s game will broadcast nationally on the SEC Network with a 7 p.m. first pitch, while Saturday’s finale begins at 1 p.m. on SEC Network+.

You can listen online at HitThatLine.com or on the radio at ESPN Arkansas 95.3 in the River Valley, 96.3 in Hot Springs and 104.3 in Harrison-Mountain Home.

With a sweep this weekend, Arkansas would become the first team since LSU (1996-98) to win 20+ SEC games in three straight seasons.

The Razorbacks need just one more win to reach 18+ conference wins for the fifth consecutive season, a feat that was most recently accomplished by Florida (2014-18).

Chris Stewart (play-by-play) and Lance Cormier (analyst) will have the call on SEC Network+ in Thursday’s series opener as well as Saturday’s series finale.

Tom Hart (play-by-play) and Chris Burke (analyst), meanwhile, are on the call for Friday’s nationally televised broadcast on SEC Network.

You can listen online at HitThatLine.com or on the radio at ESPN Arkansas 95.3 in the River Valley, 96.3 in Hot Springs and 104.3 in Harrison-Mountain Home.

• Arkansas and Alabama will meet for the 95th time in history when the two teams open the series on Thursday night. The Crimson Tide owns an all-time advantage of 49-45, including a 25-16 mark in Tuscaloosa.

• Arkansas, however, has won four straight series and eight of the last nine over Alabama.

• The Hogs have not lost a series in Tuscaloosa since 2011. Arkansas’ last sweep in T-Town occurred in 2015.

• Arkansas and Texas A&M (33-16, 17-10 SEC) are tied atop the Western Division standings with three games left to play. The Aggies, however, own the tiebreaker by virtue of a series win over the Razorbacks earlier this season.