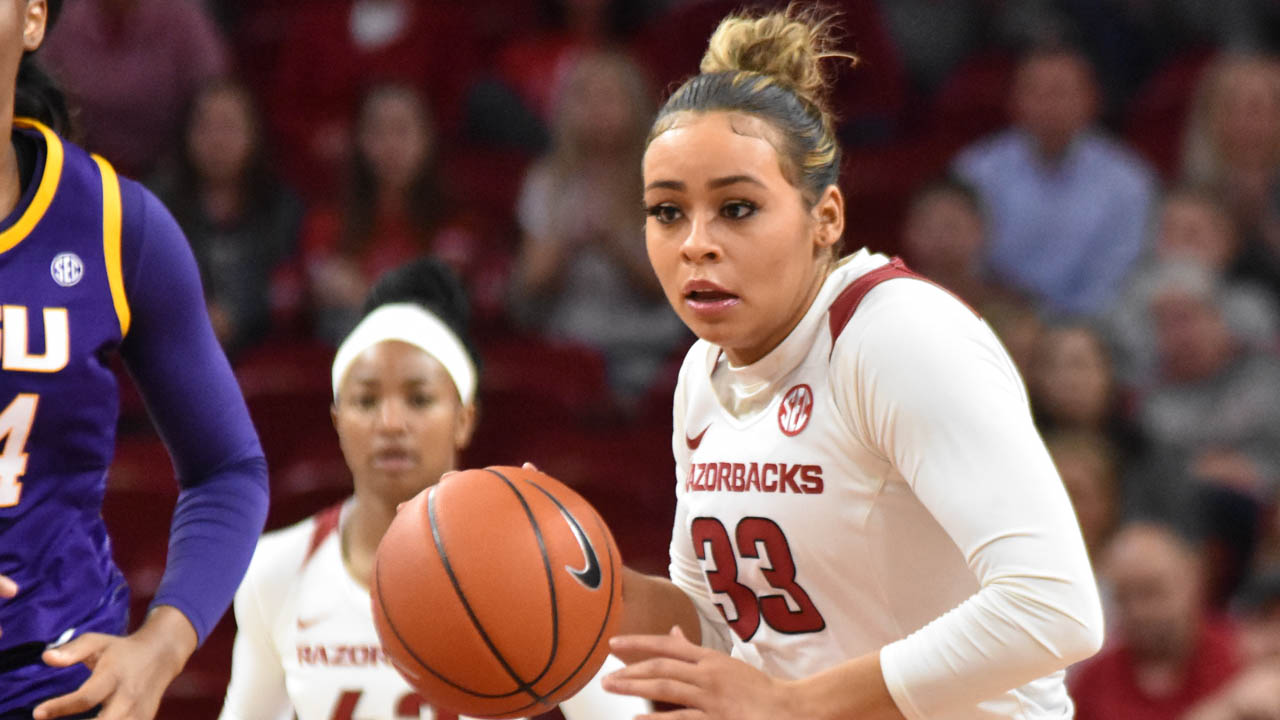 GREENVILLE, S.C. — Arkansas got a combination of 53 points from Alexis Tolefree and Chelsea Dungee and rolled over Auburn, 90-68, for a fast start in the SEC Tournament on Thursday afternoon.

They set a tournament record for the most three’s made in a game (17) and now have won at least one game in the tournament for the third year in a row for the first time since 2001-03.

For Tolefree, she nearly set the SEC record (8) for three’s by a single player, hitting seven on her way to her fourth-career 30-plus point performance. Dungee picked up right where she left off in last season’s SEC tournament, going for 23 points on an ultra efficient nine-of-14 shooting, including 5-of-8 from deep.

Auburn got off to a hot start in this game, opening the game on an 8-0 run. It was the second time Arkansas got down early to the Tigers this season.

Tolefree kept the Hogs afloat in the first, scoring nine of the Hogs’ 11 first-quarter points.

The slow start didn’t last. Arkansas started to roll in the second quarter, winning the period 26-10. The hammer was dropped near the end of the first half, as the Hogs went on a 20-3 run.

Tolefree and Dungee did most of the damage in the period, scoring 18 combined points. Senior forward Kiara Williams also had six in the frame.

• Arkansas’ 17 three’s in the game matched a program record. The Hogs also made 17 earlier this season against Oral Roberts.

• The Hogs had 25 assists against the Tigers, the most as a team since they had 25 against Vanderbilt back in 2018.

• With her nine points against the Tigers, Amber Ramirez crossed the 1,000 point threshold. She now has 1,008 career points.

• Dungee’s five threes in the game matched a career-high.

The fifth-seeded Hogs move on to face fourth-seeded Texas A&M, a rematch of this season’s SEC opener.

That game will tip-off at approximately 1 p.m. and will air on the SEC Network.