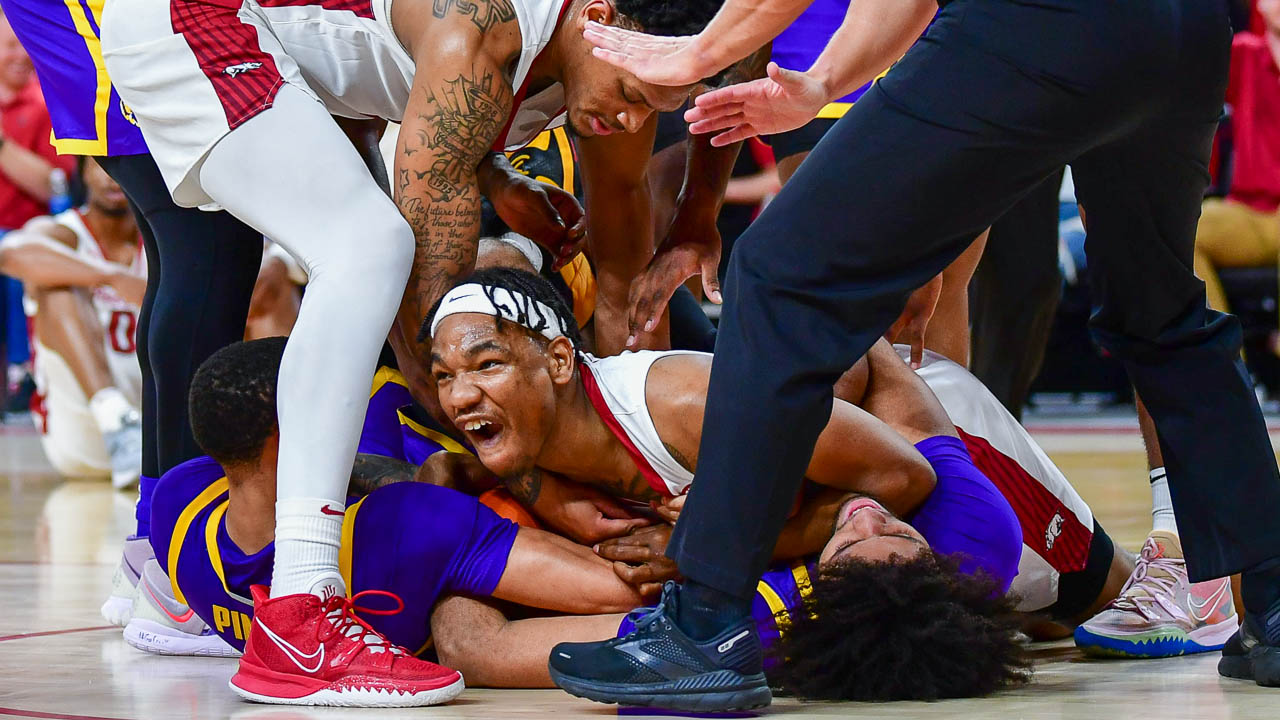 FAYETTEVILLE, Ark. — JD Notae sank two free throws with eight seconds left and the Razorbacks came up with a big stop on the ensuing possession to give #14/15 Arkansas a 77-76 victory over LSU Wednesday night at Bud Walton Arena.

Kamani Johnson, playing for the fouled-out Jaylin Williams, got an offensive rebound with 46 seconds to go. On the play, the officials reviewed the play and LSU was called for a flagrant one foul for grabbing Johnson on the rebound. Johnson made 1-of-2 free throws to get the Hogs to within one (76-75).

Arkansas could not capitalize after keeping the ball after the flagrant foul as JD Notae slipped and turned the ball over. LSU had two shots, a 3-pointer and a layup off an offensive rebound, but came up empty each time. Notae grabbed the rebound with 12 seconds left and pushed the ball up the floor. He was fouled with eight seconds left and calmly sank both free throws.

LSU had one final chance and the Razorback defense forced a tough layup by Pinson which came up short. Stanley Umude grabbed the rebound to secure the win.

Umude led the Razorbacks with 23 points. Williams, who fouled out attempting to take his fourth charge of the game with 4:27 left, recorded his sixth straight double-double (and 12th of the season) with 19 points and 10 rebounds while adding two steals and a blocked shot. Toney finished with 18 points (6-of-9 FG and 6-of-6 FT). Notae, who only scored three first-half points and was just 3-of-12 shooting, had 12 points, including a 3-pointer with 10:33 left and making 4-of-4 at the line inside the final five minutes. Notae added seven rebounds and five assists.

Arkansas concludes the regular season at #13 Tennessee on Saturday (Mar. 5). Tipoff is set for 11 am (CT) and the game will be televised on ESPN.

• Arkansas led 12-11 at the first media timeout despite LSU holding a 9-1 advantage on the backboards.

• Stanley Umude hit a basket as the buzzer sounded to tie the game at 35.

• Darius Days and Xavier Pinson each had 10 points for the Tigers.

• LSU came out hot and out-scored the Hogs 7-2 to start the second half.

• Days gave LSU a five-point lead with 5:12 left before Stanley Umude drained a 3-pointer with 4:49 left to get to within two (65-63). From that point, no team led by more than four points the rest of the way.

• Jaylin Williams scored the first points of the game, a jumper at 19:35.

• This game marked just the second time this season – and in the Eric Musselman era – that the game was tied at halftime. The other instance (this season) was 25-25 vs Mississippi State at home. Arkansas won that game 63-55.

• Au’Diese Toney was 6-of-6 at free throw line for the third time in the last four games. He has made 19 straight at the line.

• Arkansas sweeps its second opponent this year. The Razorbacks took two from Missouri as well and avenged earlier losses to Mississippi State and Texas A&M.

• Arkansas’ final five games of the year were the toughest in the nation according to ESPN BPI as all five were QUAD 1 games. The Hogs wave won the first four including victories over #8 Tennessee, at #51 Florida, vs #5 Kentucky and vs #16 LSU.

• Since Eric Musselman’s arrival, Arkansas has the most overall wins among SEC teams (69), most home wins (46) and most SEC home wins (21).

• Jaylin Williams drew three charges to run his season total of 48. It was the 15th time Williams has taken multiple charges in a game and the fifth time he has take as many as three (as well as three times taking four).