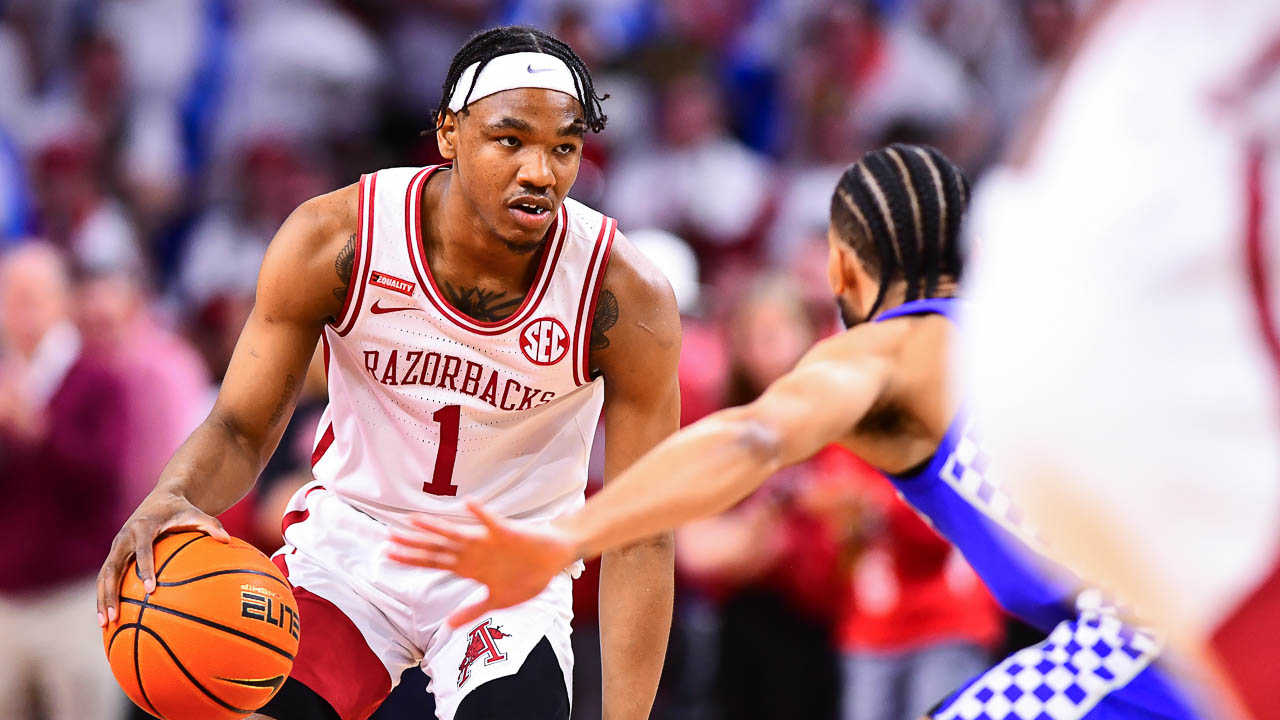 FAYETTEVILLE, Ark. — JD Notae became the first Razorback to score 30 points and have eight assists in an SEC game and Jaylin Williams recorded his 11th double-double of the year as No. 18 Arkansas defeated No. 6 Kentucky on Saturday afternoon at Bud Walton Arena.

The Hogs (23-6, 12-4 SEC) improved to 4-0 against ranked opponents this season and won its 13th of its last 14 games. The Hogs tied for second in the SEC standings, one game behind Auburn.

Arkansas raced to a 15-2 lead and led by as many as 13 three times in the first half.

The Wildcats made a run and trailed by just six points (34-28) at the break.

Kentucky continued to play well into the second half, outscoring the Hogs 13-6 to start the frame, and took its first lead, 41-40 at 14:53, since scoring the game’s first basket.

From that point, it was a slugfest with neither team leading by more than four points.

Jaylin Williams answered with a jumper to put the Hogs back in the lead and never relinquished the lead.

Arkansas got a stop and Williams converted two free throws with 36 seconds left for a three-point lead. The Hogs got another stop and Davonte Davis made one-of-two at the line to make it a two-possession game with 13 seconds left.

On the ensuing possession, Notae and Au’Diese Toney each blocked shots with nine and six seconds remaining, respectively.

Davis once again went one-of-two at the line for a five-point cushion. TyTy Washington provided the final, 75-73, after banking in a three-pointer at the buzzer.

Notae scored 30 points for the third time this season and he tied a season-best with eight assists.

Williams, who scored 10 straight for the Hogs inside the final 4:38, finished with 16 points and 12 rebounds, two assists and two steals.

It was Williams’ sixth straight double-double and 11th overall.

Arkansas hosts LSU on Wednesday. Tipoff is set for 8 p.m. and the game will be televised on ESPN2.

• Kentucky scored first but the Hogs reeled off seven straight to force a Wildcat timeout. The Hogs would push the run to 15-0 to lead 15-2.

• Oscar Tshiebwe had a double-double at halftime with 14 points (half of his team’s 28) and 12 rebounds. However, Kentucky was only up one in the rebound battle, 21-20, at the break.

• JD Notae led all scorers with 18 points while Jaylin Williams had nine rebounds.

• Davis was the first Razorback sub.

• Arkansas is now 8-8 against Kentucky in games played in Fayetteville but still trails in the overall series, 33-13.

• Arkansas is the only SEC school that is undefeated against Top 25 teams this season, going 4-0 with wins at No. 12 LSU and at home against No. 1 Auburn, No. 16 Tennessee, No. 6 Kentucky.

• Arkansas is now 45-47 when a ranked Razorback team faces a ranked opponent. Arkansas is 17-5 when ranked and hosting a ranked team.