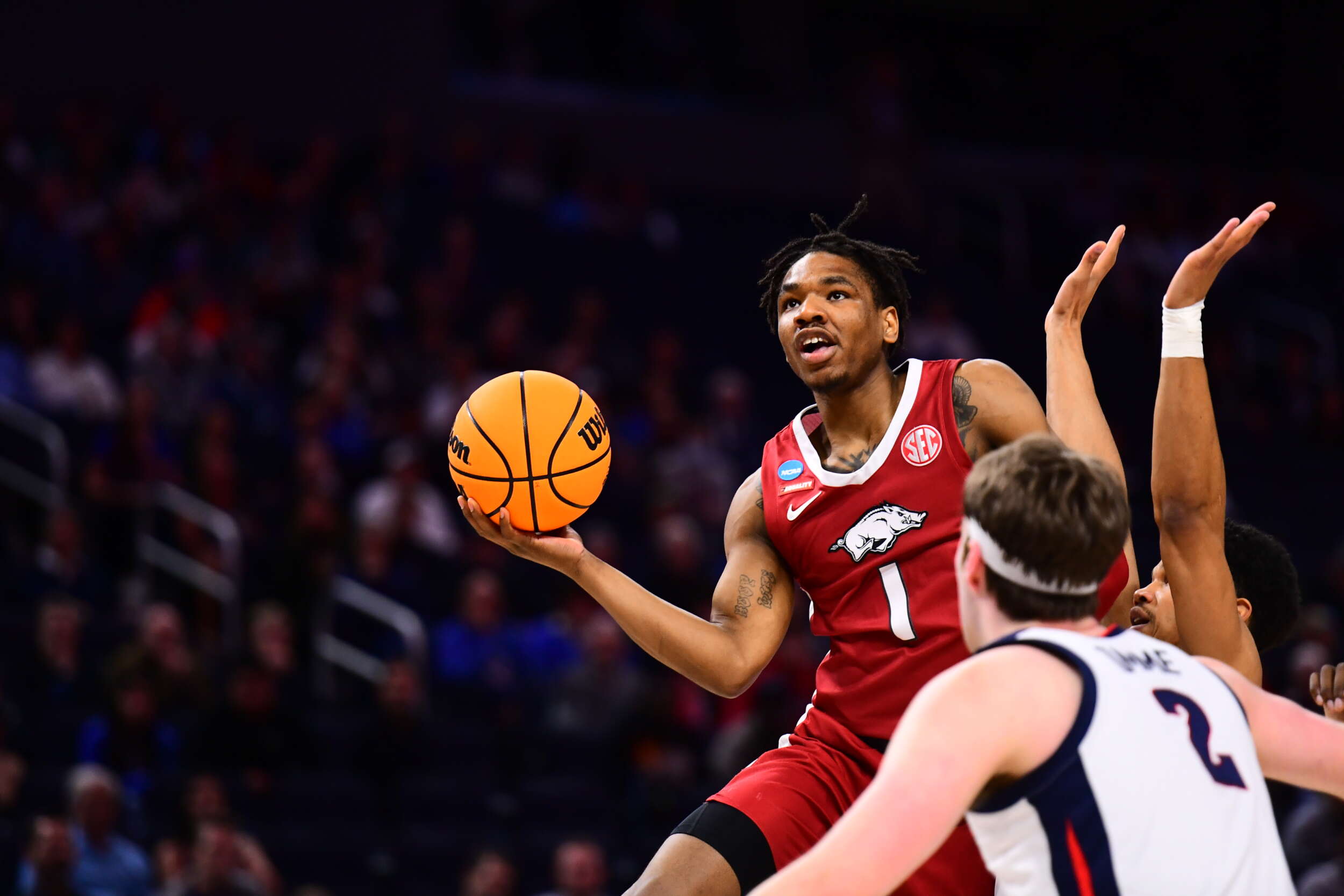 SAN FRANCISCO — It took an effort that had not ever happened in college basketball to get it done but Arkansas is headed back to the Elite 8 thanks to a 74-68 win over top-ranked Gonzaga on Thursday afternoon inside Chase Center.

Arkansas became the first team to ever beat an AP No. 1 team in the regular season (vs Auburn on Feb 8) and defeat the AP No. 1 (overall #1 seed Gonzaga) in the NCAA Tournament (ESPN Stats).

Also, no men’s college basketball team had beaten two different No. 1 teams from the AP poll in the same season since 1992-93 when Georgia Tech beat Duke and North Carolina in the same season until the Razorbacks added No. 1 Gonzaga to the win column alongside a victory over No. 1 Auburn from the regular season.

Neither victory came easy, but Thursday’s win put the Hogs in the team’s second straight Elite Eight, something that had not happened since back-to-back trips to the Final at the end of the 1994 and 1995 seasons.

Arkansas’ defensive effort was the difference against the Bulldogs, holding the nation’s best scoring offense (87.8 points per game) and best shooting offense (52.6%) to just 68 points on 37.5% shooting.

After enduring a four-minute scoring drought midway through the first half, the Razorbacks responded with a 9-0 run to take the lead and finished the half on a 13-2 run to take a 32-29 lead into the locker rooms. The late half run was fueled by forcing four Gonzaga turnovers and holding the Zags to just 1-of-7 from the field over the final 6:29.

Gonzaga quickly he drew even to open the second half but again the Razorbacks answered with a run again fueled by defense. Arkansas held the Bulldogs without a field goal for nearly five minutes to help build an eight-point lead.

Nursing a five-point lead with just eight seconds left, Au’Diese Toney’s block of a Drew Timme shot was the final momentum swing the Hogs needed. Toney put an exclamation point on the victory with a dunk with one second remaining to keep the Hogs dancing.

JD Notae led the Razorbacks with 21 points, six assists and three steals. Jaylin Williams scored 15 points and grabbed 12 rebounds to record his 15th double-double of the season while becoming Arkansas’ all-time leader in rebounds in a single season. Trey Wade’s 15 points and seven rebounds were huge in the win and marked just the fourth time this season he has scored in double digits.

Timme led Gonzaga with 25 points. Chet Holmgren scored 11 points and had 14 rebounds before fouling out.

Arkansas will face #2 seed Duke in the Elite 8. Tipoff is set for 7:49 pm (CT) and the game will be televised on TBS.

• Both teams were having success on the offensive end with the Gonzaga leading 16-14 at the second media timeout (11:54).

• Jaylin Williams became the school’s single-season leader for rebounds, passing Derek Hood’s 349 in 1998-98. Williams tied the mar at 5:12 then surpassed Hood with is eighth rebound of the game with 3:53 left in the first half.

• Jaylin Williams took his second charge of the half (52nd of the year) with six seconds left and Notae hit a layup as time expired to give Arkansas a 32-39 lead at the break.

• Notae led the Hogs with 10 points and Williams had eight rebounds.

• Gonzaga scored the first four points of the second half to take a one-point lead. The teams traded baskets and Chet Holmgren tied the game at 36-36 with 16:54 left. Trey Wade drained a 3-pointer and the Hogs did not give up the lead the rest of the half.

• Au’Diese Toney converted an old-fashion 3-point play at 8:36 in the period to give Arkansas a 52-46 lead. The six-point lead was the largest of the game by the Hogs through the first 27:28 of the game.

• Jaylin Williams scored a jumper in the lane with 7:53 left to Arkansas an eight-point lead and give him 10 points and secure his 15th double-double of the season.

• Gonzaga won the opening tip and Arkansas is 8-1 in games the opponent wins the tip.

• Arkansas was just 1 of 5 schools to make the Sweet 16 this year and last year along with Gonzaga, Houston, Michigan and Villanova.

• Arkansas is now 1-1 all-time versus Gonzaga.

• Arkansas is now 3-11 versus AP #1 in program history. The Hogs defeated #1 North Carolina in Pine Bluff and deafted Auburn in Bud Walton Arena earlier this season.

• Arkansas forced 15 turnovers but only committed eight. Arkansas had six blocked shot compared to three by Gonzaga. The Bulldogs entered the game #6 in the NCAA in blocked shots per game (5.9).

• Trey Wade was 3-of-4 from 3-point range. The 3 triples are his most in a Razorback uniform. His seven rebounds ties for his second-most rebounds as a Razorback.

• Kamani Johnson was the first sub off the bench for the second time. Arkansas is 2-0 in those games beating No. 1 Auburn and Gonzaga.

• Au’Diese Toney had two blocked shots to tie his career high (his fifth time to do so).