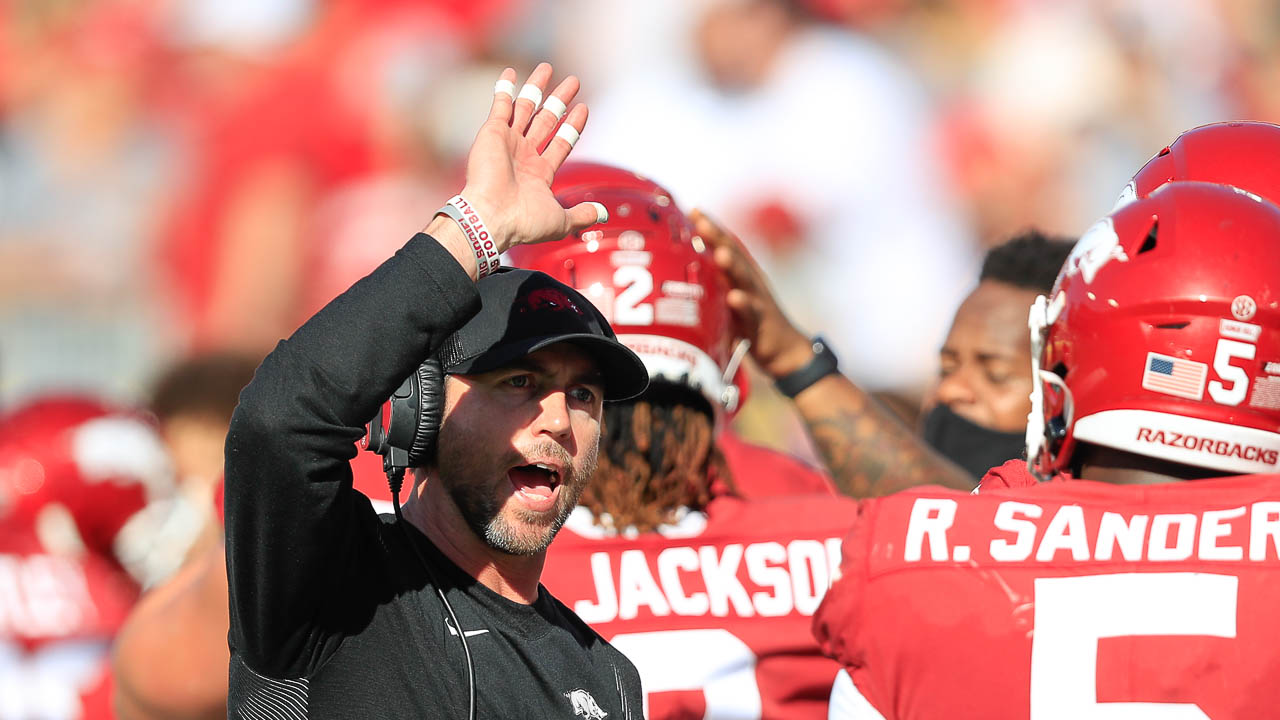 It never was that close and Arkansas fans can celebrate.

The final score of 24-10 didn’t give a good clue of the Razorbacks’ domination in the Outback Bowl in Tampa, Fla., on Saturday.

Penn State couldn’t stop a methodical Hogs’ passing game and KJ Jefferson had a game that will launch him into the national conversation next season when ranking quarterbacks.

Jefferson only threw for 90 yards with none of the wide receivers doing anything to answer the question of who will step up and replace Treylon Burks, who is headed to the NFL.

But he ran for 110 before giving way to Malik Hornsby, who ran for another 67 yards before some kneel-downs at the end

The Hogs got on the board first in the game on a 3-yard run by Rocket Sanders as the first half ended to complete a 12-play, 61-yard drive that set the tone for the entire day.

Arkansas was going to run the ball right at the Nittany Lions and see if they could do anything about it.

They did in the second quarter, mainly on a busted secondary coverage by the Hogs that let Sean Clifford find a wide open KeAndre Lambert-Smith for a 42-yard scoring strike.

But there would be no more touchdowns allowed by the Hogs’ defense in this one.

They did give up a second-quarter field goal to the Nittany Lions and the offense couldn’t do much in the second quarter.

Penn State fans had hope with a 10-7 lead at halftime.

By the start of the final quarter, that was gone completely. Jefferson started just keeping the ball and there wasn’t a whole lot the Nittany Lions could do about it.

Jefferson kept it himself up the middle for an 8-yard scoring run with 12:42 left in the third that gave the Hogs a 14-10 lead. Everybody could have gone home then.

Arkansas’ defense was already starting to assert itself. When Penn State did get into the red zone, Hogs safety Joe Foucha came away with a couple of interceptions to dash any hopes.

Jefferson was named the offensive player of the game.

3Q 2:08: Rocket Sanders’ second touchdown of the day blows the game open as Arkansas’ offense begins to take control of the game and is wearing down Penn State’s defense. Hogs 24, Penn State 10

2Q 5:19: Nittany Lions get a 34-yard field goal from Jake Pinegar and take the lead after defense gets a handle on the Hogs’ offense, putting pressure on KJ Jefferson repeatedly. Penn State 10, Hogs 7

2Q 11:00: Penn State answers as Hogs blow a secondary assignment on the back end that leads to a 42-yard scoring pass from quarterback Sean Clifford to KeAndre Lambert-Smith and tie the game. Hogs 7, Penn State 7

1Q 0:00: Sam Pittman isn’t leaving anything on the field, going for fourth-down conversions twice and Rocket Sanders scored on the final play of the first period. The Hogs’ offense went into super-fast near the end, running two plays in the final seconds against a new Penn State defense to set up the first score of the game. Hogs 7, Penn State 0

Hogs running back Dominique Johnson picking up yardage in the first quarter of Outback Bowl. (Photo by Michael Morrison/HitThatLine.com)

Penn State took the opening kickoff and used a 42-yard pass from Sean Clifford to Parker Washington and stalled on an intentional grounding and sack that set up a 50-yard field goal attempt by Jake Pinegar that was wide right and short. Hogs 0, Penn State 0

Pregame: The weather is perfect, now Hog fans just need a win to cap off a 2021 season that has exceeded all expectations.

All they have to do is beat Penn State at Raymond James Stadium in Tampa today.

Grant Morgan warming up before the team comes onto field for pregame activities. (Michael Morrison/HitThatLine.com)

It will be the final game of a six-year career for players like Grant Morgan, Hayden Henry and Blake Kern.

We will have all the action for you with updates throughout the game.

No. 25 Arkansas Razorbacks vs. Missouri