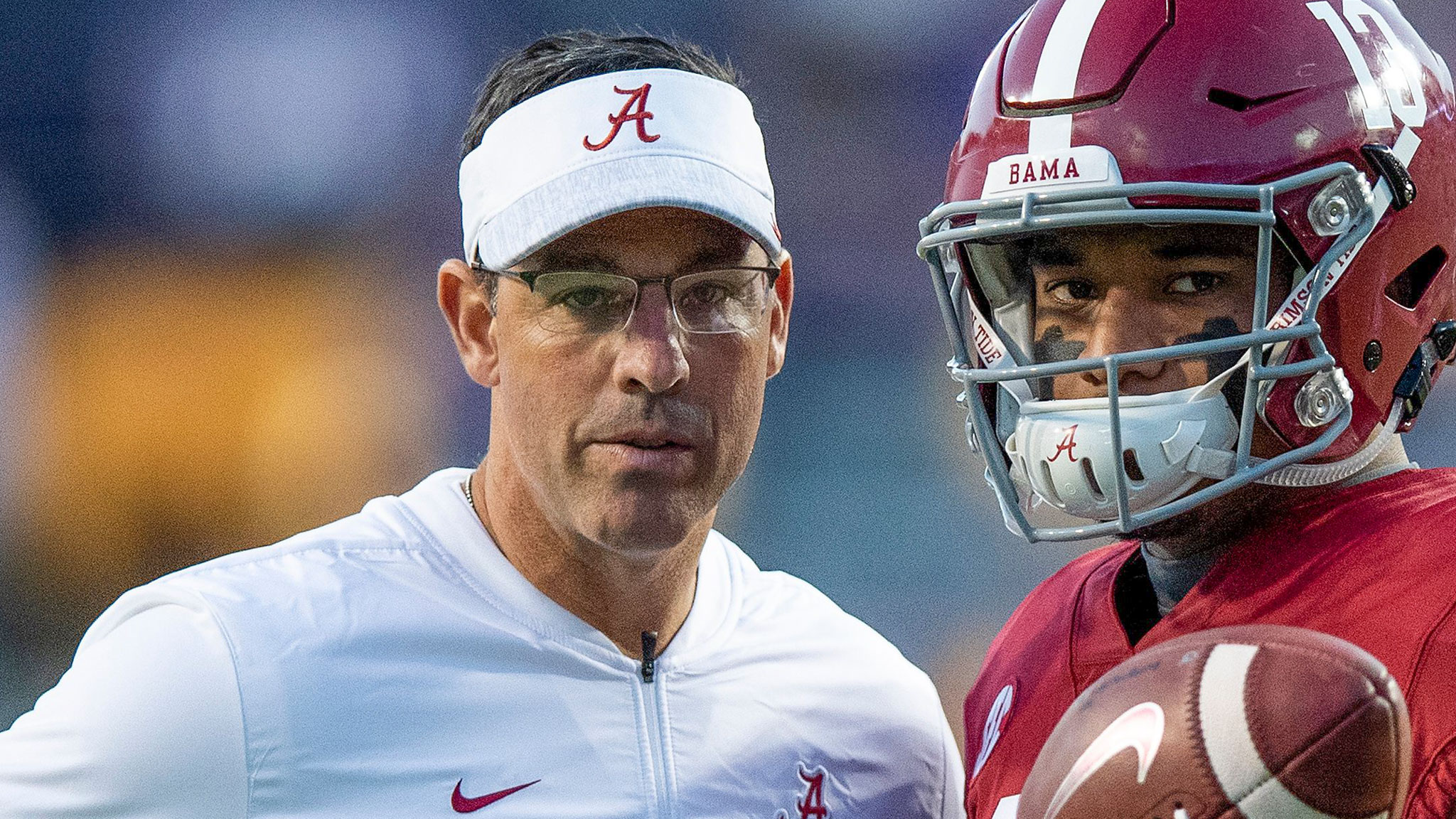 Enos returns to the Razorbacks with over 30 years of coaching experience, including three seasons as the Hogs’ offensive coordinator and quarterbacks coach from 2015-17.

During his three seasons in Fayetteville, he engineered some of the most productive offenses in school history with both the 2015 and 2016 Razorback offenses still ranking in the school’s Top 10 for total yards and yards per game.

Enos’ first offense on The Hill in 2015 remains one of only three offenses in school history to surpass 6,000 yards. In his lone season under Enos, Razorback quarterback Brandon Allen set three school records, including the career mark for touchdown passes with 64 and the single-game record for touchdown passes in a game with seven against Mississippi State.

That 2015 offense — with Pittman as the team’s offensive line coach — set the school record for touchdowns with 62, averaging 35.9 points per game (6th all-time at Arkansas) while rushing for 2,565 yards and passing for 3,486 yards.

The Hogs was one of two FBS programs with a 3,000-yard passer and 1,300-yard rusher in both 2015 and 2016, featuring a different quarterback and different primary running back in each season.

Enos has spent the past two seasons at Maryland as the Terrapins’ offensive coordinator and quarterbacks coach, helping the Terps to 15 total wins that includes bowl wins over Virginia Tech (2021 Pinstripe Bowl) and NC State (2022 Duke’s Mayo Bowl).

In 2022, Enos’ offense ranked fourth in the Big Ten in total offense and scoring, averaging 401.2 yards per game and scoring 28.2 points per game.

For the second straight season, QB Taulia Tagovailoa eclipsed the 3,000-yard mark passing for 3,008 yards as one of just three Big Ten QBs to top 3,000 yards passing during the 2022 season. Tagovailoa added 18 touchdowns while completing 67% of his passes to earn second-team All-Big Ten honors from the league’s coaches.

He finished third in the league averaging 256.0 yards of total offense per game as one of just three players in the Big Ten to gain over 3,000 total yards.

Freshman running back Roman Hemby led the way for the Terps on the ground, rushing for 989 yards and 10 scores to go along with 33 receptions for 298 yards and another TD.

Along with being named a Freshman All-American by College Football News, Hemby was named Honorable Mention All-Big Ten as one of six Terps from the offensive side of the ball to earn the honor along with OL Jaylyn Duncan, TE Corey Dyches, OL Delmar Glaze and WR Rakim Jarrett.

The six total selections matched the school record for the most since joining the Big Ten and marked the second straight year that saw six selections from the Maryland offense.

Tagovailoa added seven single-season school records of his own in his first season in the Enos system, setting top marks in passing yards (3,860), completions (328), completion percentage (69.2%) and passing touchdowns (26).

Enos spent the 2020 season at Cincinnati as the Bearcats’ associate head coach and running backs coach.

The Bearcats went 9-1 during the pandemic-shortened season, winning the American Athletic Conference title and earning a spot in the Sugar Bowl before finishing the season ranked in the Top 10.

The Cincinnati offense ranked in the Top 25 nationally in nearly every offensive category, including rushing offense (212.4 yards/game) and points per game (37.5).

He spent the 2019 season at Miami after coaching quarterbacks at Alabama in 2018 as the associate head coach. With the Crimson Tide, Enos molded Tua Tagovailoa into an All-American, Walter Camp Award and Maxwell Award winner to help the Tide reach the national championship game.

During his one season with Enos, Tua Tagovailoa completed 69% of his passes while throwing for 3,966 yards and 43 TDs and just six interceptions to set an all-time FBS single-season passer rating (199.44).

Before his first tenure at Arkansas, Enos was the head coach at Central Michigan for five seasons. He led the Chippewas to two bowl games, earning bowl eligibility in three of his five years at the helm.

During his time in Mount Pleasant, Mich., 23 Chips earned All-Mid-American Conference honors with four of his five offense passing for 3,000+ yards.

Enos began his coaching career as a graduate assistant at his alma mater before landing his first full-time coaching job at Division III Lakeland College as the Muskies’ offensive coordinator for the 1994 and 1995 seasons.

A one-year stop at Northern Michigan (1996) led to two seasons at Southern Illinois (1997-98) before a single season at Missouri State (1999) as the offensive coordinator.

He moved back north to become the quarterbacks coach at Western Michigan (2000-02) for three seasons before a one-year stint at FCS power North Dakota State (2003) as the offensive coordinator.

His first tenure at Cincinnati came during the 2004-05 seasons working for Head Coach Mark Dantonio as the quarterbacks coach before leaving to coach QBs at Michigan State (2006) for coach John L. Smith.

Enos played quarterback at Michigan State from 1987-90. In two seasons as the starter, he led the Spartans to a 16-7-1 record, including a pair of bowl wins. He still ranks among the best in school history with 3,837 passing yards and 297 completions. His .621 completion percentage ranks fourth-best in Spartan history.

Enos and his wife Jane, have two children, a daughter, Lia, and a son, Alex.