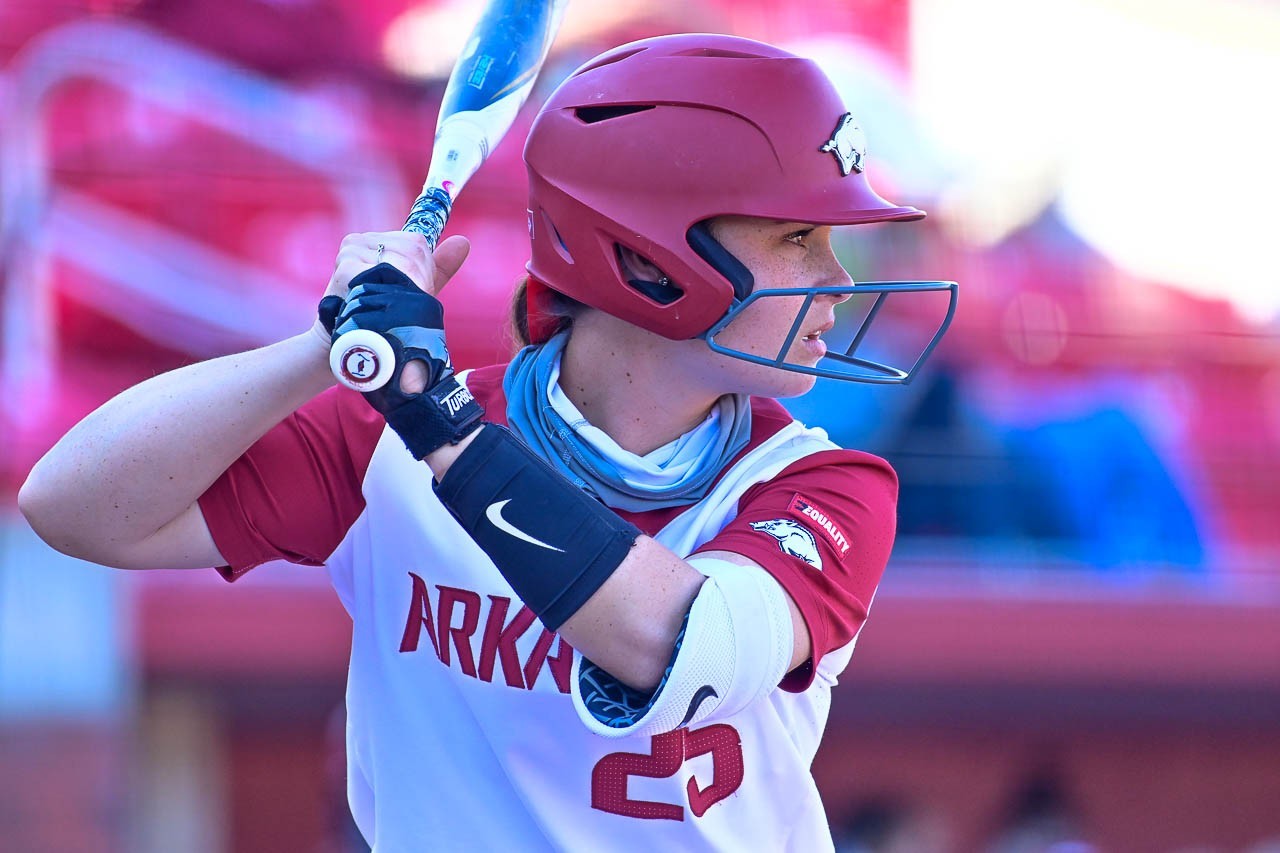 Catcher Kayla Green hit the go-ahead grand slam in the sixth inning of game one, and infielder Danielle Gibson blasted the walk-off grand slam in game two, as No. 20 Arkansas swept a doubleheader over Drake, 6-3, and 6-4, at Bogle Park on Thursday evening.

Drake (2-8) scored a solo tally in the first inning on a sacrifice fly to grab an early lead, but Arkansas tied the game, 1-1, in the bottom of the fourth. Outfielder Linnie Malkin blooped a single to center and infielder Hannah Gammill walked ahead of Green, setting up her first RBI on a single to center.

The Bulldogs were quick to respond, however, and went up 3-1 in the next half inning on a double and a sacrifice fly.

Arkansas’ offense saved its comeback for the bottom of the sixth as Green’s grand slam, and third homer of the season, put the Hogs in front, 5-3. Infielder Braxton Burnside’s RBI double down the right field line added an insurance run.

The tandem of Mary Haff and Jenna Bloom worked inside the circle for Arkansas, with Haff earning the start and pitching 4.0 innings, allowing five hits, two earned runs and three walks with four strikeouts. Bloom (3-1) was victorious out of the pen. In 3.0 frames she allowed just one hit and one run. Nicole Thomas (1-3) pitched well for Drake until the big sixth stanza, working 5.1 innings allowing four earned runs with seven strikeouts.

With Arkansas trailing 4-1 and down to its final three outs, the Hogs rallied as Manzo singled, pinch hitter Sam Torres reached on an error and infielder Audrie LaValley was hit by a pitch.

Burnside hit a slow rolling infield single to short scoring pinch runner Larissa Cesena and cutting the deficit in half, 4-2. On a 1-1 pitch, Gibson blasted her fourth long ball of the year, a grand slam to center, to walk it off, 6-4.

Arkansas scored first in the bottom of the second after outfielder Ryan Jackson tripled to right, and Green’s double to center plated her. Drake scored two runs in both the fifth and seventh stanzas.

Haff (7-1) was the pitcher of record coming on in relief, tossing 2.2 innings and allowing three hits, two runs and one earned run while striking out five.

Both Green and Gibson led the offense with two hits. Drake outhit Arkansas, 11-8.

The Razorbacks play Kansas at 3 p.m. and Northwestern State at 5:30 p.m. with both games airing on SEC Network+.