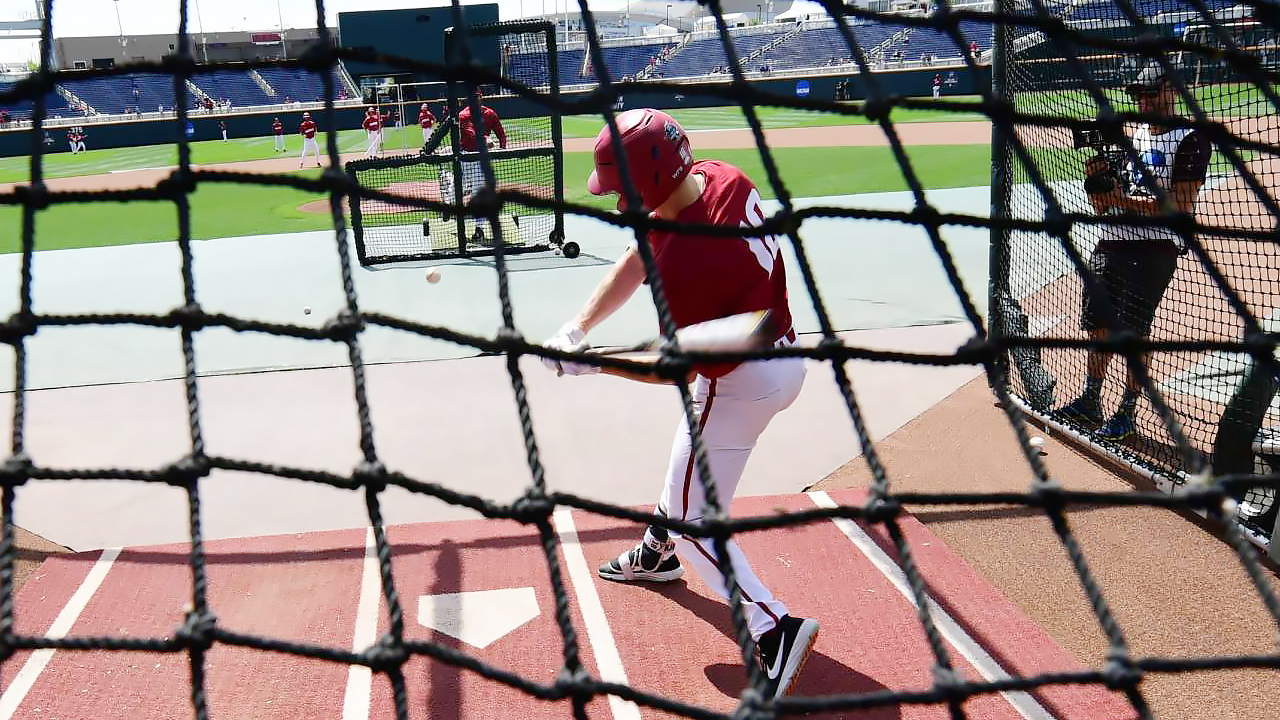 ESPN will carry the game and the winner will face either Michigan or Texas Tech on Monday.

You can hear all of the games with Phil Elson and Bubba Carpenter on ESPN Arkansas 95.3 in the River Valley, 96.3 in Hot Springs and 104.3 in Harrison-Mountain Home.

After locking up the top-eight seed for the NCAA Tournament, the Razorbacks were able to stay home through the regionals and super regionals, winning five of six games by a combined score of 50-22.

Having the home field advantage was also a major key to the Hogs’ success as more than 10,000 fans filled up Baum-Walker Stadium during each of Arkansas’ postseason games, including 11,000 or more during the Super Regionals.

For the second consecutive year, Arkansas faced off with a conference foe during Super Regional action, taking on Ole Miss at Baum-Walker Stadium.

Last year, the Razorbacks hosted South Carolina, bringing their season total to seven, the most meetings with a team in one season in program history.

By the end of the 2019 NCAA Fayetteville Super Regional, that record was broken, as the Hogs and Rebels reached eight games against each other in this year.

In the opener, the Razorbacks commanded a dominating 11-2 win, but fell, 13-5, in game two to force a winner-take-all Super Regional finale.

On Monday, the Razorbacks put up crooked numbers in the second and third innings and never looked back, closing the book on the series with an emphatic 14-1 victory to punch the program’s 10th trip to the College World Series.

Trevor Ezell, who will be playing in his first CWS as a senior, has set the tone for the Arkansas hitters in the leadoff spot, putting together a .328 average at the plate.

During the Super Regional, Ezell went 7-for-14 with four RBIs and five runs.

Solidifying its top-five seed for the second-consecutive year, Arkansas is in the NCAA tournament for the third-straight year and 31st time in school history.

Of its last 17 tournament appearances, 16 have come under Dave Van Horn.

Isaiah Campbell will, once again, get the ball for the Razorbacks to open the weekend at the College World Series against Florida State. Campbell, a unanimous All-American, has given Arkansas ace-like numbers all year as the Friday night starter.

With a team-leading 2.26 ERA, Campbell has garnered a 12-1 record and struck out 115 batters over 111.1 innings, which are all career-bests heading into the CWS.

Campbell is coming off, arguably, his best outing as a Razorback, working a career-long 8.1 innings in the NCAA Super Regional last week against Ole Miss, striking out seven.

Campbell has a 1.65 ERA in 16.1 innings of the NCAA Tournament this year and has pitched eight or more innings in each of his two starts.

Having to face in-division foe Ole Miss for a school record eighth time this year, the Razorbacks pummeled the Rebels in game three of the NCAA Super Regional, 14-1, to advance to its 10th College World Series in school history.

It was the second-largest Super Regional victory in school history and allowed Arkansas to advance to the CWS in back-to-back years for the first time in program history.

Heston Kjerstad, Casey Opitz and Trevor Ezell combined for six of Arkansas’ 12 hits. Kjerstad and Opitz both hit home runs in the blowout as well.

DVH by the numbers

Coach Dave Van Horn has advanced to eight College World Series as a head coach and two as a graduate assistant in 1985 and 1987.

Going back to his years at Nebraska, Van Horn has led his teams to 20 of the last 21 NCAA Tournaments.

Van Horn has also won 40 or more games in nine of the last 11 seasons. He has the second most appearances in the CWS among all active head coaches.

• The Razorbacks won a share of the SEC Western Division title for the second-straight year, finishing with an 20-10 conference record.

• This year marks the 10th time Arkansas has advanced to the College World Series in program history and first time in back-to-back years.

• Last year, the Razorbacks matched their best finish in program history, falling to the Oregon State Beavers for their second National Runner-Up finish in school history (1979, 2018).

• Arkansas is slated to face Florida State (41-21) in its opening contest of the CWS.

The Hogs and Seminoles have only faced off five times in their extensive histories, but all five games came in the postseason, four in NCAA Super Regionals.

• The Hogs are 88-67 (.568) all-time in the NCAA Tournament, including 24 tournament wins in the last six years. Last year in the College World Series, Casey Martin and Dominic Fletcher both hit .357 and .346, respectively, combining for 19 hits and 11 RBIs.

• Right-hander Isaiah Campbell will get the ball for Arkansas’ first game of the CWS.

Campbell has been the Friday night starter all season and is 12-1 on the year with a 2.26 ERA and 14 quality starts.

Last week against Ole Miss, Campbell worked a career-long 8.1 innings, throwing 102 pitches and striking out seven. He’s struck out seven or more in both of his tournament starts.