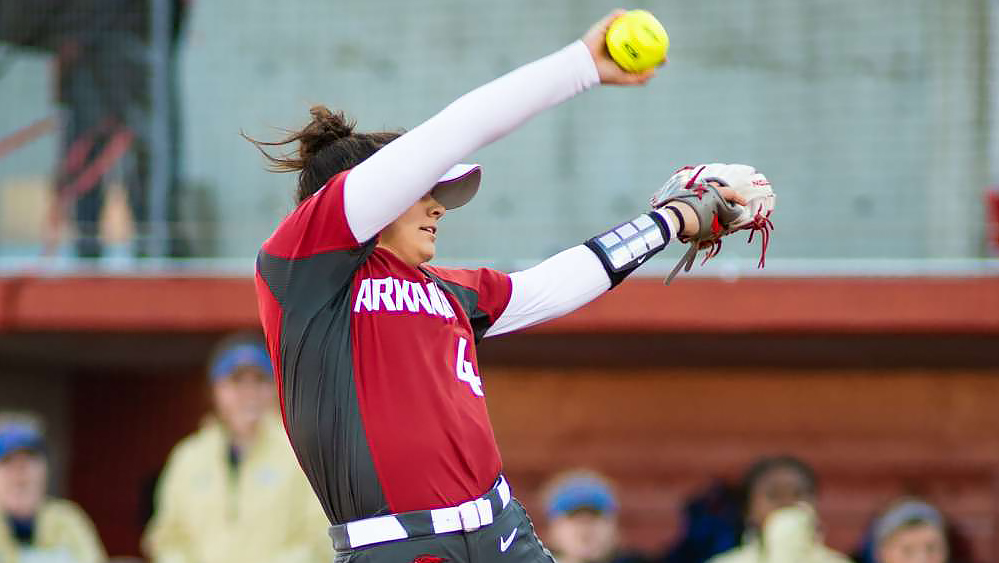 FORT MYERS, Fla. — Arkansas defeated both Furman and UIC at the FGCU Invitational at the FGCU Softball Complex on Saturday, downing the Paladins, 8-1, ithen the Flames (2-1,) 8-3.

Arkansas outhit Furman, 14-3, and held the Paladins to one hit through six innings. Freshman pitcher Jenna Bloom earned her first collegiate win (1-0) and junior Braxton Burnside turned in her first 4-for-4 day at the plate.

The Razorbacks got on the scoreboard first in the top of the third inning as junior Danielle Gibson drove in junior Hannah McEwen on a single to center to grab a 1-0 lead.

In the top of the fifth, Gibson recorded her second RBI of the day with a seeing-eye single through the right side to go up, 2-0.

The rest of Arkansas’ runs all came via the longball. Junior Linnie Malkin put Arkansas in the driver’s seat by crushing a three-run homer to left to cap off a four-run fifth frame and gave the Razorbacks a 5-0 advantage.

Malkin leads the club with three longballs and homered for the third time in her last four games.

In the top of the sixth inning, junior Braxton Burnside smashed a solo homer, her second of the year to put the Razorbacks up six.

Sophomore Audrie LaValley capped off the Razorbacks scoring by blasting a two-run homer in the top of the seventh. Furman scratched across a single tally in the bottom of the seventh on a single to center.

Bloom worked four innings and allowed only one hit and walked three with six strikeouts.

In her homecoming to the Sunshine State, junior Mary Haff threw the last three innings out of the pen and allowed two hits, one earned run and fanned a season-high four batters.

The Winter Park, Fla., native collected the rare three-inning save (1).

UIC snuck across a run in the first inning to claim a 1-0 lead.

The Flames took advantage of two errors and a hit by pitch to score. Haff masterfully worked out of a runners on second and third nobody out situation and struck out the side to limit the damage.

Arkansas’ offense immediately went to work in the bottom of the first and posted four runs on four hits. Parr slapped a single to center and McEwen walked which allowed Gibson to single up the middle and score the first Arkansas run.

After fouling off eight two strike pitches, Malkin spanked a two RBI single to left and advanced to third on a throwing error.

Green came through with two outs and sent rolling single that was stopped behind the second base bag by the UIC second baseman which allowed Malkin to score from third.

The Razorbacks scored a single tally in the fourth on a sacrifice fly by Sydney Parr to go up, 5-2. UIC answered in the next half inning by hitting an opposite field leadoff triple and scored on a throwing error.

In the bottom of the fifth, Green drew a bases loaded walk and freshman pinch runner Larissa Cesena scored on a wild pitch to push the Razorback lead to, 7-2.

The Flames scored another run in the sixth inning on a two out single to center and the Razorbacks scored again on a Sydney Parr bases loaded walk.

Arkansas closes out the FGCU Invitational at 11:30 a.m. Sunday against the host Eagles.