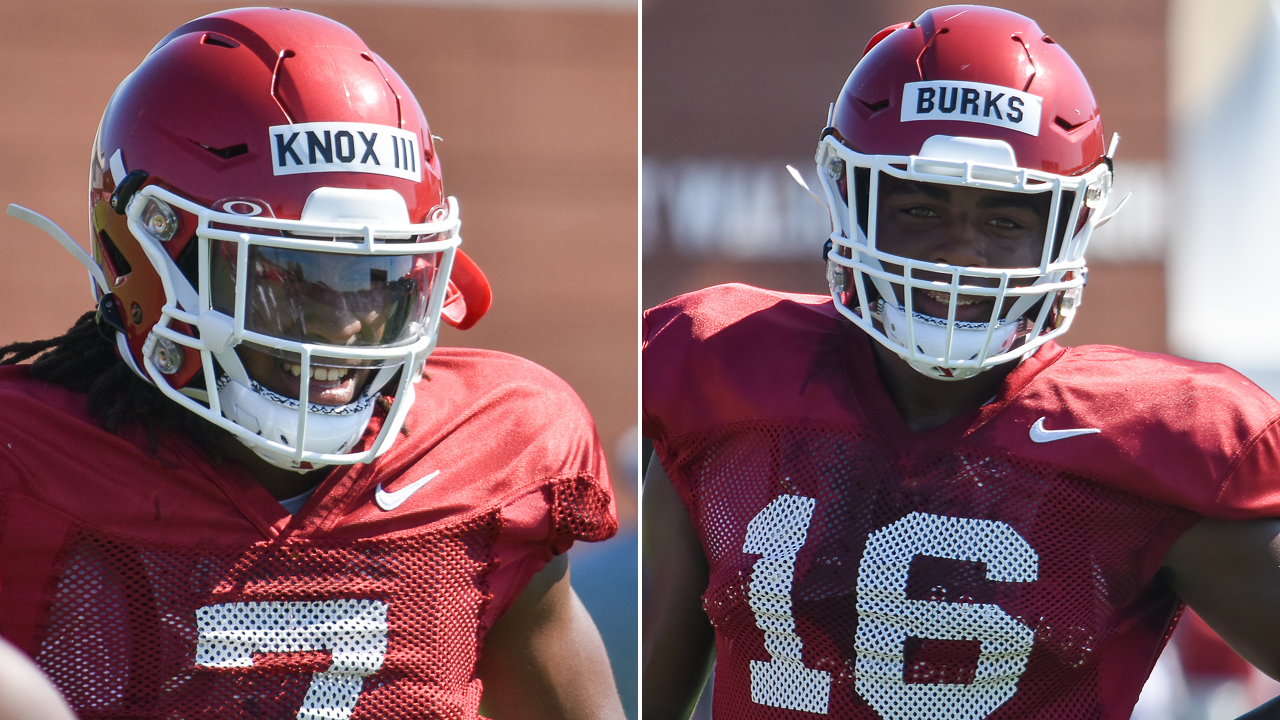 Based on the reports we media trolls hiding under the bridge around Arkansas football in preseason camp get to hear, the freshmen wide receivers are doing exactly what they were recruited to do.

That is to be playmakers in the Razorbacks’ offense. Immediately.

And it’s all of them — Trey Knox, Treylon Burks, Shamar Nash and T.Q. Jackson

With senior wide receiver Deon Stewart going down with an apparent ACL tear in the scrimmage Saturday, the spotlight is going to get even brighter.

It was reported at WholeHogSports.com that Stewart’s mother confirmed the injury on Facebook on Saturday evening.

Now they will need to be playmakers. Junior De’Vion Warren is one of last older guys standing (Jordan Jones and Tyson Morris are, too), who talked about the freshmen Saturday, particularly Burks.

“He had two today. It was good to see him move.”

Some have noticed a different attitude throughout the entire team and it starts with the coaches. There is a calmness that wasn’t seen often last year.

You get the idea they actually feel they have something that’s completely different from last year’s gut-wrenching 2-10 season.

It starts with the overall team attitude, but a group of young receivers that show the promise to be playmakers reinforces it. Last year there simply weren’t consistent playmakers, probably for a variety of reasons.

“These guys were making plays,” Morris said after Saturday’s scrimmage.

As usually happens in fall camp, injuries are starting to be a little more frequent. Stewart’s injury was the latest. C.J. O’Grady and Koilan Jackson have already had what is termed “clean-up” surgery and are expected back before the season opener.

Last year, the lack of playmakers was part of the problems. Particularly the consistency.

“They’ve done that through the course of camp, but today they were more consistent than I’ve seen them,” he said.

“Every day they show me something different,” he said about the freshman receivers. “To me, those guys are going to explode because they came in ready. They didn’t have to come in and get physical or have to learn the playbook. It’s all there.”

The receivers aren’t the only ones shining in camp. The running back trio of Rakeem Boyd, Devwah Whaley and Chase Hayden have quietly put together a solid start, mostly by staying on the field.

“They were patient with their runs and knew when to hit it,” Morris said. “Some of them might have had four- and five-yard gains, but that’s what we’re after. We’re after being patient with that running game and finding that crease, so it was good to see those guys.”

As I suspected, as it comes together, the offense is starting to catch up to the defense.

Any coach will tell you if a team plays it’s best in September, it’s going to be a rough November.

Now where all of this stacks up right now against SEC competition is something we won’t know for awhile.