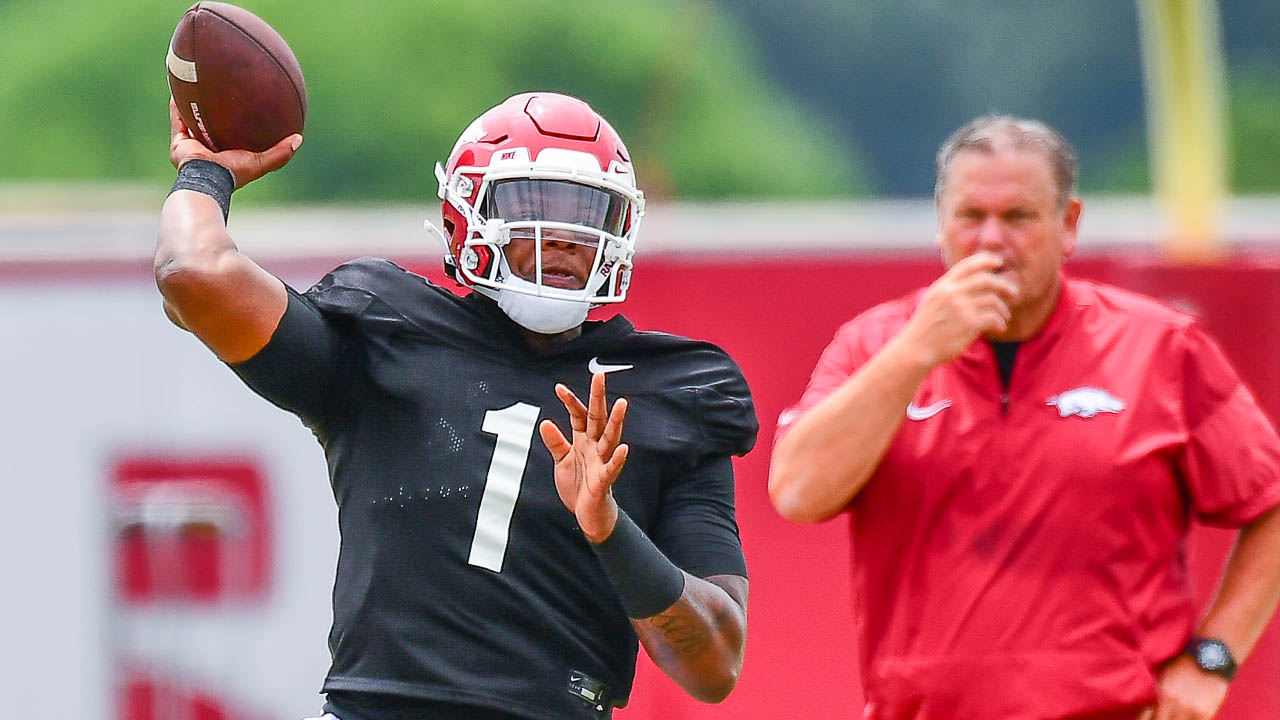 KJ Jefferson is going to be behind center for Arkansas’ season opener Sept. 4 and nobody has a clue right now if he’ll still be there in November.

Whether that’s due to performance or still standing upright is open to argument.

It’s a crapshoot in the SEC on how long running quarterbacks will hang around and it’s sounding more and more like Sam Pittman is counting on his ability to be a threat in the running game.

Evaluations are difficult, too.

“It’s just hard in scrimmages for him a lot of times to get into a routine because he’s so powerful as a runner,” Pittman said after the first live scrimmage Saturday.

RELATED:   Torres having to change thoughts on Hogs after stomping Longhorns

Nobody gets to touch the quarterbacks these days. For teams that don’t view their quarterback as a key part of the running game it works itself out before halftime of the opener.

Things can take a little longer for runners.

“That’s the hardest part going into it as a quarterback,” Jefferson said Saturday. “In scrimmages, being limited with making plays with our legs, it’s kind of hard, but you’ve got to adjust to it, basically.

“We all treat it as adversity, knowing we can’t run as much, so let’s focus on the part where we’re making great decisions with the ball, getting the ball down the field and getting the ball to the playmakers.”

That last part is going to be the key. Jefferson has playmakers at the receiver positions. He’s just got to get them the ball and let them make plays because he’s probably not going to run the Hogs to a bowl game by himself.

Has shown the physical tools to get the job done.

“The offense rides around him,” safety Jalen Catalon said about Jefferson. “The offense moves as KJ moves. Hhe’s done a great job of realizing that, and just making plays, making the right reads.

RELATED:   Avoiding Trap: How to Watch, Listen to Arkansas-Georgia Southern

“Everybody on the offensive side is doing their job and it’s helping KJ out a lot.”

Quarterback has become the most important position on every team in college football these days. If you don’t have a good one, well, there won’t be many wins. Without a great one nobody has won a championship.

But we won’t know until we get some answers.