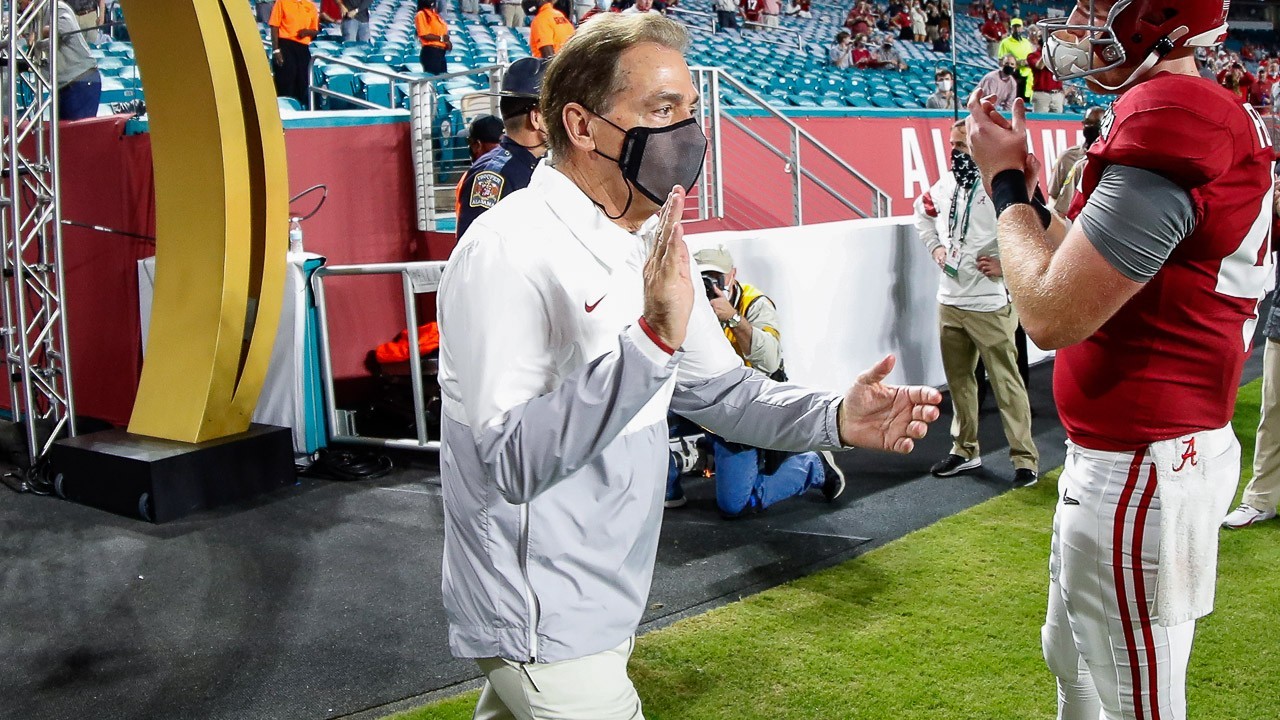 Alabama’s routine dismantling of Ohio State on Monday night was a message to the rest of the SEC they are still the king of the mountain and not coming down soon.

At least as long as Nick Saban hangs around.

The Crimson Tide’s 52-24 win over the Buckeyes was his seventh national title. It will not be surprising if the adds one or two more to that total before he decides to step down.

Most of the time losing games contributes to whatever health issues that a legendary coach has when he retires. Saban himself has said he’ll think about retiring when he can’t contribute anymore.

Interestingly enough, it was Bear Bryant who told a reporter in 1982, “I can’t coach ’em anymore” a month or so before he retired after winning six national titles. Just so we’re accurate here, Saban has tied Bryant for titles won at Alabama ( won the title coaching LSU).

“This is the ultimate team,” he said in the postgame celebration. “They had to overcome and persevere through so much adversity.”

Saban endured LSU’s Greatest Team Ever proclamations last season, then had maybe his best team in the midst of a global pandemic that completely up-ended his carefully-regulated “process.”

It all came together Monday night when Crimson Tide quarterback Mac Jones had the best championship game in history. He beat LSU’s Joe Burrow by a yard passing in a 36-of-45 night with five touchdowns.

“This was a team that was always together,” Saban said later. “They always bought in. This was a great team.”

Every championship coach has his favorite team, for whatever reason. Bryant’s favorite was his 1961 team that was his first.

On a side note to that team, Arkansas played gave them their closest game of the year in the Sugar Bowl in a game the Tide won, 10-3, on a crisp partly cloudy day in New Orleans where the Tide kept the Hogs’ Lance Alworth in check. It seemed Alworth had about a dozen plays where he was tripped up by an ankle tackle or something.

This team, though, is Saban’s favorite … at least until another team comes along, which is probably not going to happen. Like everybody else, Alabama had things nobody ever thought about having to deal with this season.

Saban, though, just did it better than anybody else.

No idea about anybody else, but I knew this game was over on the second play of the game when Jones threw a pass to Devonta Smith and he turned what would normally be a minimal gain into a 22-yard play just because he out-ran everybody.

Smith set a playoff record with 215 yards on 12 catches and scored three times. That was just the first half, by the way, because he injured a finger almost immediately in the second half.

“I’ll be alright,” he said after the game.

Considering he will be a first-round draft pick in the NFL Draft in April, that’s good news. It was just a finger that probably won’t affect him much.

Alabama simply dominated Ohio State with an offense that probably could have scored considerably more and a defense that has progressed through the season.

Remember when that was supposed to be the Tide’s weakness this year?

Defensive lineman Christian Barmore, named the MVP on that side of the ball after the game, may have just summed up everything after the game from the Alabama point of view:

“We came to dominate,” he said.

And that’s exactly what the Tide did against an Ohio State team that has now been knocked around three times in national title games against the SEC.

The bad news for the rest of the SEC is this may not be the end of the Tide’s run.

Maybe the biggest question is whether the gap is getting bigger, especially for programs like Arkansas.