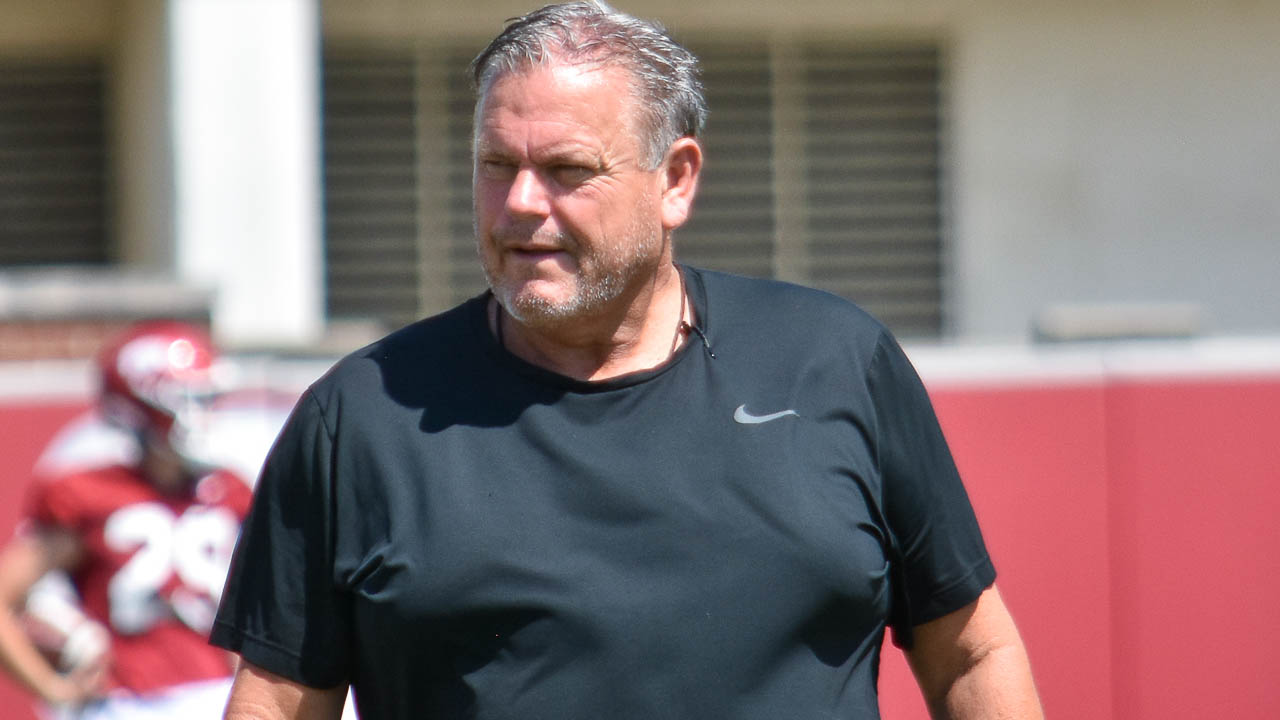 Sam Pittman doesn’t seem to pay a whole lot of attention to negative stuff … at least publicly and certainly not at a press conference.

“I’m probably the most positive guy in the world, so I’m looking to see positive things,” he said later after he called Thursday’s first day in pads.

It was hot. Air temperatures were in the 90’s and it was a whole lot warmer whenever you stepped on the artificial turf. Nobody was using that field except some of the kickers and punters.

Nobody really seemed to notice.

“I don’t even want to say they fought through the heat because you didn’t even notice they were struggling through it,” Pittman said. “We got a lot done.”

Most of what got done was situational work. With the searing heat, the coaching staff may have wanted to see what the players could do staying focused on situations in the heat.

About the only thing that seemed clear was this team looked to be in shape through at least the first 20 minutes or so of Arkansas’ sixth practice of fall camp.

Maybe the most important thing we saw in our brief time watching practice was the players coaching and encouraging their teammates. That’s been seen much more in fall camp and it picked up a little the first day in pads.

“We took care of each other,” he said later. “The guys policing their own team about running to the ball and staying and thudding and not going on the ground with thud. Not a lot of mistakes.”

Part of that is the experience on this team, including several “super seniors,” who have been around long enough to nearly qualify for university tenure status. The older guys are teaching and we’ll find out how much the younger guys get from it.

“The thing about these guys, they work now,” Pittman said. “They’re not afraid of work.

“Any time you have big people and fast people and smart guys, guys who love the university and they go out and work, you’re going to get better. That’s kind of what we’ve seen. Guys are not afraid of work, and we’ve been very pleased with that.”

It wasn’t a perfect practice, though. Pittman saw some things he talked about immediately after the practice ended.

“We’ve got to get better at protection,” Pittman said. “I’m not just saying we can’t protect. We’re violating our eyes a little bit, and between the backs and O-line we have to get better there because we can’t cut somebody loose on our quarterback.

“We have to get better at that.”

He’ll find a few more things watching the film. As running backs coach Jimmy Smith said in passing earlier this week, the coaches do things in drills to review with the players on the practice film. Everything is on tape these days.

Pittman thinks this team is getting a little tougher, which is something that has disappeared over the last few years.

“We had some guys that got knocked down and got back up and we haven’t always done that,” he said. “A lot of times (before) we went to the sideline. We’re getting a tougher team. I guess I’m most excited about that.”

Don’t expect all of the fall practices to be like that. It is a positive start.

And Pittman is looking for positives in a program he inherited with too many negatives.