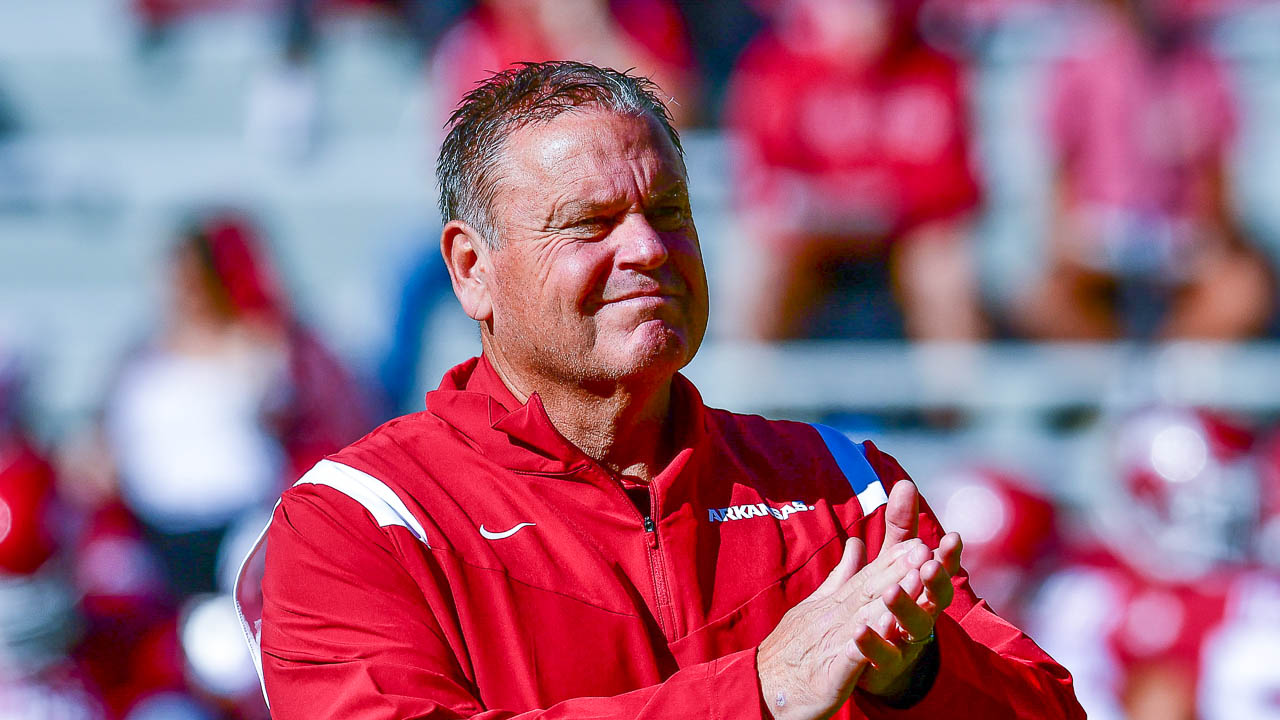 Rivalry week. Everyone has their disgusting nemesis for which the very mention of their name draws internal anger.

You know what? I will let this “Are we really rivals” debate abide as it has received more coverage than even the Vanderbilt secondary can provide.

Yes, that was a horrible analogy, but hopefully you’re eating green bean casserole as you read this and my poor attempt at humor wins out by comparison.

Speaking of, it’s Thanksgiving, and your time is valuable, so I will keep it short.

The Battle Line Rivalry takes place in Fayetteville this Friday, and I can honestly say with confidence I like our chances, and the cool part about that statement is I am not going out on a limb by saying it whereas in years past I would be mocked over dinner at my family’s holiday feasts.

Well, the ridicule was the product of either my homer prediction or the fact I always venture back to the front for a fifth helping of dressing.

I almost begrudgingly declare with our recent history versus Missouri I have actually developed a little bit of distaste for their program.

You might be able to compare it to the revulsion of your aunt’s favorite homemade diet potato salad. Diet? Have you forgotten it’s November?

Okay, my appetite is sidetracking me.

Where was I going with this? Oh yeah, I know I said previously I would not discuss the rivalry debate between Arkansas and Missouri; however, I almost cannot resist stating there may finally be a bit of a feud slowing coming to a boil between these two SEC programs.

First, Arkansas defensive coordinator Barry Odom was the head coach at Missouri prior to coming south to the Natural State.

Second, Razorbacks running back Dominique Johnson was committed to the Tigers prior to rumored speculation he discovered their new head coach, Eli Drinkwitz, had lied to Johnson and was not going to play him at running back by instead moving him to tight end.

Third, Drinkwitz (who was raised in Alma, Arkansas and played for Arkansas Tech), had some less than flattering things to say about his home state’s flagship football program and their recruiting after players (like Johnson) and coaches decided to follow Odom away from the dark side that is Columbia.

Finally, their fans talk a lot of trash, and Tigers players in years past have done the same in the week leading up to and following the contests. Unfortunately, they have been backing it up.

It is our turn now to show dominance, but no matter what happens Friday, Arkansas is bowl eligible and have gained national respect as head coach Sam Pittman, his staff, and his players have our beloved program headed steadfast in the right direction.

Drinkwitz could have done a much, much better job in his Jedi Knight troll-job impression after beating Dan Mullen and Florida. Has Drink ever even seen “STAR WARS”?

Arkansas is hyped. Our defense will come out to play hard for Odom.

I will not list the names here, but losing to Missouri has been the final nail in the coffin for a handful of head coaches. Take the time to research if you get a chance.

TRIVIA QUESTION: Following Thanksgiving in 1953, Swanson had 260-tons of unsold turkey. With the excessive surplus, Swanson salesperson Gerry Thompson used the leftovers (no pun intended) to create what?

I bet you are thankful you checked in on our Arkansas boys who have led the UTSA Roadrunners to an undefeated season and a No. 15 ranking. Okay, you’re probably not grateful, but their success is impressive.

We must not get lax after the great game we played in Tuscaloosa. We have to avoid the dumb penalties which seem to constantly dig us into a hole. Maybe our home crowd Friday can be extra quiet when we have the ball, especially on third and short … and first and 10.

Friday is Senior Day in Fayetteville. If you can, put down the Black Friday flyers, head into Razorbacks Stadium, and support our beloved Hogs. I am thankful for every senior on this team, their loyalty, and their dedication. Keep making memories!

TRIVIA ANSWER: Gerry Thompson invented the first TV dinners which cost 98-cents each. His reward was a $1,000 bonus which was the equivalent of five month’s salary.

Thanks Florida for (as predicted) getting rid of Dan Mullen. I really, really did not want to have to tell Triple-T he should continue to umpire softball. [Shameless flashback to a previous piece.]

Arkansas players, please play with some heart and dedication this weekend. I know you will, but for some reason we seem to play down against Missouri. Let’s give our fans something to be proud of just as you have been doing all season long. Honestly, I do not believe a lack of intensity is a problem with this team.

And what is Thanksgiving weekend without a few expressions of gratitude?

I would like to thank my friends and family for their support on so many things as of late. The list of individuals is too long, and I fear I might leave someone off, so please know you are all dear to me. I extend my gratitude to Andy Hodges and Tommy Craft who permit (or tolerate) me to do this.

To all of you who read my musings week-after-week, once a month, or have even just glanced your eyes upon my words once, I give you my full appreciation and respect. Whether you enjoy these or roll your eyes, I am happy to be a part of your life for even just a few minutes.

A special thank you to Dale and Kristy.

And, of course, I would be remiss if I did not thank God for all with which He blesses me. Why He shows me grace I do not know.

Oh, to those in the SEC offices, I will furthermore be appreciative of good officiating on Friday ensuring the Hogs end the regular season with a victory.

Not only is it championship week, the Hit That Line Picks Cup has reached its pinnacle, and I fear Andy Hodges’ gambles created a late season run for him which may have shot him either closer to first place or at least kept him within striking distance. Someone asked me the other day how come we do not keep track as the season progress. It’s easy. If I know where we stand in the rankings, then I start picking for strategy instead of going with my instincts on each game, and I feel that waters down what I am hoping to accomplish. Good luck this week, Hodges.

(9) Ole Miss at Mississippi State – GAME OF THE WEEK: I do not like calling this game by its given traditional name which it was dubbed based upon the shape of the trophy. I cannot quite pin down why it bothers me. Maybe because the name of the game is represented by a fragile object, or perhaps it is due to a bad experience I had with a truck stop breakfast in 1992. Regardless, throw rankings out the window with the leftover cranberries as this could and should be the usual down-to-the-wire fistfight we enjoy when these two in-state foes meet. Twisted thought: it would be kind of cool to place a wrestling ring in the middle of the field, give Mike Leach and Lane Kiffin each brightly colored elastic man-panties, and hang an LSU coaching contract over the top turnbuckle. That will not happen, but Lane will boost his resume for LSU and Florida by the close of business on Saturday. Rebels by 8.

Missouri at (25) Arkansas: On Friday I will also be thankful for a win over Missouri which will bring the “Battle Line” trophy home. Hogs by 17.

(1) Georgia at Georgia Tech: This used to be a fun way to close out the regular season weekend. No one wearing Yellow Jacket fan gear will find any joy on this one. Bulldogs by 34.

Florida State at Florida: I said I would not pick strategy all season, and I will not start here. Dan Mullen being, uh, removed from his coaching duties at Florida will make this one interesting but not in the same way it was in the days of yore. One team leaves bowl eligible. The other leaves as Seminoles. Gators by 7.

(3) Alabama at Auburn: The Iron Bowl… See, Mississippi, that’s how you name a rivalry. Alabama has a date with Georgia, and playoff implications weigh heavily in Tuscaloosa, thus there is no way Nick Saban lets his Crimson Tide take a week off. Not to mention, Auburn no longer has Saban’s kryptonite, Gus Malzahn, donning a visor and sweater vest that would make Eddie Haskell swoon. That’s a lovely win, Mr. Saban. Tide by 21.

(15) Texas  A&M at LSU: The only thing standing between Ed Orgeron and one more bowl with LSU are the 8 – 3 No. 15 Texas A&M Aggies. As bad as I want it for my friends from the bottom of “The Boot”, I think the purple and gold start paying attention to basketball first thing Sunday morning. Thanks for the countless amount of material, Ed! Aggies by 14.

(23) Clemson at South Carolina: This Gamecocks team is led by head coach Shane Beamer. Following their tough win over Auburn, Beamer earned a spot as one of my favorite SEC coaches when during the post-game interview he stopped to hug his young children who ran up to their father riddled with excitement. That says a lot about character. Unfortunately, Clemson comes to town, and it will take more than charisma to pull the upset. This game will be close until the end. Tigers by 15.

Kentucky at Louisville: Is it me, or do these two schools not hate each other nearly as much as they should? Hey, 13, your team gets a victory on the road against their in-state “rival.” Wildcats by 10.

Check in during the game for all the highlights and updates from Friday’s contest.