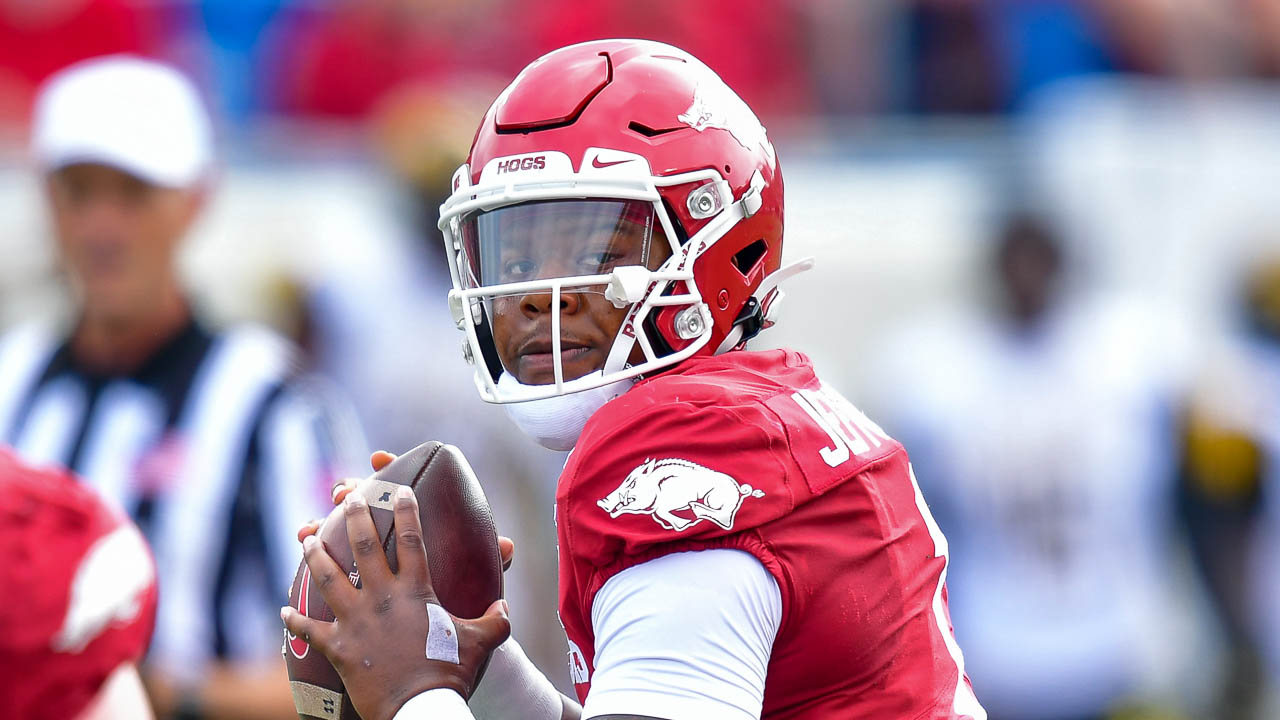 If you have never been to our bordering neighbor you have definitely been missing out.

The historic towns, lovely people, and mayflies so big and plentiful they turn auto detailers into millionaires are just some of the “cannot miss” pleasantries you will encounter if you ever do decide to make the journey.

For clarity, there is absolutely no exaggeration in my last statement whereas you and your motorized vehicle of choice literally CANNOT MISS the mayflies.

Yet I must add it is truly a beautiful state this Mississippi, slightly down and to the right of us.

Right now the appealing qualities of anywhere are irrelevant though as it is the Mississippi State Bulldogs who will be making a trip to Fayetteville to face the Arkansas Razorbacks.

“But what about the importance of this game? Is there any? Are not both pretty much longshots to win even the SEC West title.”

Good questions. Let me answer those with an inquiry of my own.

I mention again there are without a doubt countless great people from the Magnolia State, some of whom I consider close friends and wonderful acquaintances, yet what is it about SEC football which will make us despise one another for one week out of the year (or two if it is our team ends up with a notch in the ‘Loss’ column)?

I will gladly tell you. Football is king in the south.

Yes, God is God and family is family, but third in line is always the pride and respect we feel are earned when our team is triumphant upon the green turf.

We as fans and programs do not like to lose, and we do not enjoy a win tainted with any possible excuses coming from the losing side (unless your Auburn then you will take a win any way you can get it).

It is always and in all things us versus them, and even holiday dinners take a backseat to any and all pigskin contentions.

Let us not cheapen what we do not like to admit and that is even though it is not a traditional rivalry, many impacts upon the conference standings and bowl representatives have been made when Arkansas and Mississippi State face off in the SEC West.

So, yes, there is somewhat of a quiet rivalry between the Razorbacks and the Bulldogs from Starkville, and while no trophy travels nor sits in a display case, losing to one another is not an option for the fans, the players, and the coaching staffs.

Both programs have newer versions of the latter.

In the freshman SEC campaigns for both coaches, Sam Pittman got the winning mark against Mike Leach in what some think was the first of what will be many historic games between the two.

That, however, was 2020, and 2021 finds Leach somehow or another having forgotten the advice he gave Eric Taylor and thus the head Bulldog seems to have lost his inner pirate.

The Bulldogs do have some momentum coming off an upset of then No. 12 Kentucky while the Hogs have basically come off back-to-back bye weeks with the latter actually having been a week off preceded by an easy win over UAPB.

Sometimes a little downtime is just what the doctor has ordered.

Other times it may lull you into a soft sense of security before returning to discover your brain fails to focus early and you cannot quite remember exactly what it was you were doing right before you left.

Either way, friendships, business partnerships, and bragging rights may be on the line this Saturday as Mississippi State comes into Razorback Stadium, and we all know how important it is to not lose to both Mississippi schools in the same season.

Oh, and there is one other thing of importance in this game. A win by Arkansas makes them bowl eligible, and it seems like forever since we have felt this hope and luxury this early in a season.

Happy Anniversary to Meleah and Steven Detherage who will be celebrating by attending the game this weekend! They deserve a ‘W’, especially after the assistance and patience Meleah exhibited last week.

Razorbacks fans, let’s be friendly to our neighbors from visiting from the southeast. After all, if it weren’t for Mississippi … well, you know the cliché.

Plus they hate the pretty boys from Oxford even more than we do.

Hey, if you are not going to use your tickets for this weekend, please GIVE THE DAMN THINGS AWAY!!!

Mississippi State is proof you can be ranked high, play terribly, and work your way back into the Top 25 all in the same season. That or you can be the Duke basketball team and simply be ranked no matter how pathetic you are.

Speaking of basketball, Eric Musselman and his Razorbacks welcome Mercer into Bud Walton Arena on Tuesday night. Let’s rock the Bud! I kind of promised Coach Muss we would.

Arkansas’s defense has to do better than it has in recent games. Seriously, this is not a joke.

I will repeat: If you have not noticed what former Arkansas coaches Jeff Traylor and Barry Lunney, Jr. are doing at the University of Texas at San Antonio (UTSA) you had better start.

If you have not heeded my advice, perhaps the Roadrunners catapulting to being ranked 16th in the country will get your attention.

The Razorbacks will need to play almost perfect on defense to live up to my upcoming optimistic prediction.

Arkansas makes itself bowl eligible at home, and this one is not as close as many think.

Be certain to listen to the game Saturday at 3:00 P.M. via HitThatLine.com and on the air at ESPN Arkansas 95.3 in the River Valley, 96.3 in Hot Springs, and 104.3 in Harrison-Mountain Home.

Andy had an opportunity to make a move on my slowly growing lead, but he played strategy and opted to pick against his instinct. Now he may end up ruing the day…

Missouri at (1) Georgia: I have internal debate on whether or not I like Missouri Head Coach Eliah Drinkwitz. On one hand, he has called the state of Arkansas home since his first birthday. On the other, he seems to possess an egotistical and overconfident aura akin to former LSU (and Arkansas State) Basketball Head Coach John Brady. None of this really matters in my prediction; I  almost feel bad for the guy as his Tigers head into Athens to face the top-ranked Bulldogs. Texas A&M already pulled off the mandatory yearly major upset of the SEC for 2021, hence Mizzou stands no chance. Georgia by 27.

Liberty at (16) Ole Miss: You immediately have to wonder if Liberty Head Coach Hugh Freeze’s return to Oxford will be ice cold. Do the Ole Miss faithful have any guile towards the coach who had their program pointed towards the Promised Land before a few investigations and loose lips discovered some recruiting violations and paid players? Many football fans seem to forget that part. What they do remember is it was all topped off by our beloved Houston Nutt and his legal team requesting and utilizing the Freedom of Information Act to support their defamation lawsuit against the university. Unfortunately for Freeze (who also coached at Arkansas State), this FOIA led to some not so well-placed calls to an escort service by the Rebels head coach to a popular escort service. This directed an exile for Freeze out of Oxford and later a successful hire and far improved football program for Liberty. This may actually be a good game. Oh, Ole Miss and Lane Kiffin will be there as well.  Rebels by 14.

(13) Auburn at (14) Texas A&M – GAME OF THE WEEK: One of these two teams has to lose this week and I almost love it. I used to hold a soft spot in the deep echoes of my heart for Auburn, but their past two coaching hires seem off-putting. Auburn is better overall, but the Aggies have the ability to play at a higher level when they are running smoothly. This may be the best matchup in the country this weekend, and A&M walks away with a victory. Aggies by 10.

(17) Mississippi State at Arkansas: The Razorbacks will give the Detharage family an enjoyable gift and memory. Arkansas by 21.

LSU at (2) Alabama: This used to be a game of the week every single time these two squared off on the gridiron. Unfortunately, all things change, and LSU’s focus should be on rebuilding for the future, but under whose leadership? Do Coach O care enough at this point? Bama by 31.

Tennessee at (18) Kentucky: My gosh how times have changed. Both of these programs are on trajectories completely opposite from their storied successes and the lack thereof. Kentucky is probably a little underrated, and they do have the home field advantage against a struggling Rocky Top team. Wildcats by 22.

Check in during the game for all the highlights updates from Saturday’s contest.

Hey, let me give a shout-out to Avery from TCU who was integral to my recovery during my recent illness.

Thank you very much, young lady for helping to put my mind at ease during such a trying time. Please extend to all members of the Mercy staff my appreciation. You all have bright futures.