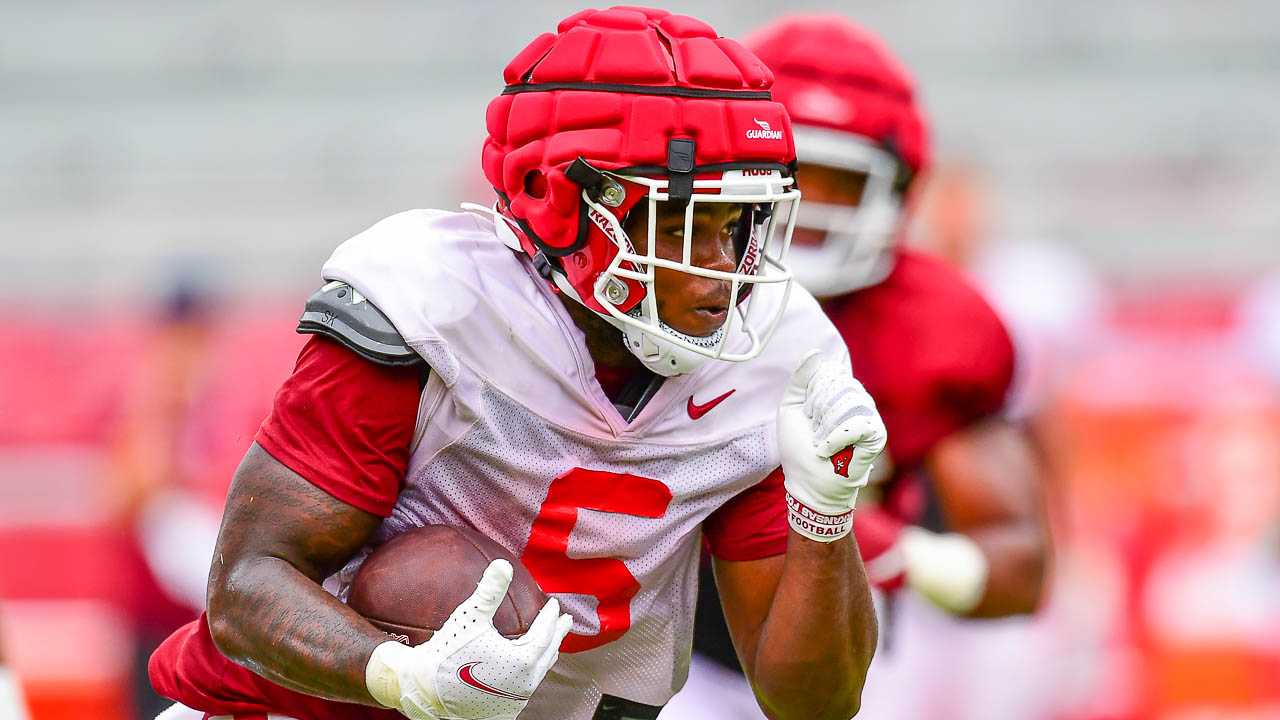 Has it really been an entire off-season?

It seems like yesterday we were discussing how Sam Pittman was turning the program back into the right direction, why Auburn’s victory over us will always have an asterisk, and how you can love a woman to the moon and back but you still have to treat her like a queen.

Wait, my apologies, that last part was a private conversation privy to only me and my recently single neighbor.

Regardless, the time for 2021 Razorbacks Football is now here. Arkansas hosts the Rice Owls for opening day, and the anticipation cannot be more, well, honestly, indecisive.

The Razorbacks on paper (and via social media hype videos) look even more improved than they did in Pittman’s inaugural season. Young talent is rising, veterans are better developed, and there seems to be a belief in the structure of the program not only from the players but the coaching staff as well.

Ease back on the throttle there, Turbo. There are, or course, areas of concerns, at least in the minds of the casual viewer.

Right out of the gate one ponders about Mike Woods leaving for OU and if anything behind the scenes may be the root cause. The young man states he simply wants to put up big numbers under a Lincoln Riley offense. Nothing more, nothing less. I believe him. Best wishes.

The quarterback position graduated a fantastic arm with Feleipe Franks leaving for the NFL to having just earned a spot on the 53-man roster for the Atlanta Falcons. That leaves KJ Jefferson and Malik Hornsby to fill the huge void.

Jefferson has two starts under his belt and played better than average last year against Missouri by throwing up a lower completion percentage (18 of 33 for 54.5%) yet still racking up a decent 274 yards in the air, three passing touchdowns, and 32 yards rushing including one score.

Playing against the Owls this weekend looks to be the perfect initiation game as a confidence builder for KJ as the full-time starter.

And, as a bit of fun banter, there is talk of a package put into place to utilize the talents of Hornsby, so early speculation is we will see a trial run versus Rice on Saturday. An additional dynamic such as this will open even more of the playbook for Kendal Briles, thus creating additional opportunities for success.

The coaching staff saw some changes, and, for many, that can create anxiety and doubt upon the consistency we were seeing in the 2020 season.

My thoughts are Pittman hires well and he promotes even better. I have no worries on the coaching staff, especially given we know offers were made for defensive coordinator Barry Odom and rumored interest was made into hiring away Briles. If you are not paying attention, both stayed.

Many positives have also brought sensations to the spot where true football fanatics know they tingle when a program is making great strides.

[Rocket Sanders has entered the chat.]

The running back position is already laden with talent, and adding a player with the physique and capabilities as Rocket (a.k.a. Raheim) is only going to make the life of Trelon Smith easier.

Sanders played primarily wideout at Rockledge high school outside Orlando, Florida, but he also saw significant duty in the backfield. HE. IS. IMPRESSIVE. And, yes, he will be rocking that No. 5.

The work ethic has grown even more inspiring than during Pittman’s freshman campaign. Have you seen the aforementioned social media hype videos?

I’d link them here, but I get paid by the word you read, and currently I am only at less than or equal to one-third of one cent for the season. Oddly enough, I get paid in Andy’s used Justin Bieber sleeveless t-shirts, so fingers crossed I get to at least above the bottom hem this year.

Why he shops at some place called Starkel’s Surplus I will never know.

Without a game under out belts it is truly tough to tell; however, all indications are Arkansas is much improved with talent, coaching, dedication, and (as mentioned) work ethic.

The returning veterans. We do have some great depth coming back at crucial positions. No doubt this will assist in bettering our chances throughout the season and this first game.

Desire. When Pittman and his staff sit in the living room of a recruit, they are not always looking for absolutely the most gifted athlete. They are searching for the player who has talent but also has the “it factor” we hear about every time we open a sports blog written by a guy who thinks “STAR WARS” redefined the way America lives. I digress.

Why Rice will win:

“Pete, you did not talk about Rice at all in your preface.”

I only have so long before 38% of you click on the ad for Big Creek Trading company. So if you are one of my 62-percenters, thank you, and enjoy reading the keen wisdom and knowledge in the next two pieces of opinion and speculation.

Truth is I don’t know much about the Owls. I do give them credit for pushing through last season despite COVID. A number of their games were postponed and never player or simply cancelled. They were able to squeeze in five games finishing with a 2 – 3 record with a marquee 20-0 win over (and at) No. 15 Marshall.

Yes, I had to triple-check my memory on that one, but the Rice Owls who lost to both Middle Tennessee and North Texas upset the then 15th-ranked Thundering Herd in 2020.

Coach Mike Bloomgren is in his fourth year, and his team possesses talented Conway, Arkansas native and redshirt freshman Jovoni Johnson as its starting quarterback who took the reins in the win over Marshall.

One of Johnson’s primary targets will be standout sophomore receiver Jake Bailey. Furthermore, despite injury, Bloomgren has a very disciplined defense returning in 2021.

Rice has a linebacker named DJ Arkansas. Seriously. Word is Barry Odom offered this kid out of Denton, Texas, yet he had no interest. Who knows, but what a fantastic name.

Check out hitthatline.com daily to see the latest updates before, during, and after the game.

I’m loving the passion the new additions to the coaching staff are bringing to this program.

It’s always stated, but we have to establish a strong rushing game to free up KJ Jefferson and the wide receivers, especially with an alleged injury hampering and possibly even sidelining Treylon Burks.

I hope the Hogs put more effort into the game Saturday than I did this week’s piece.

Rice will put up a fight, but Arkansas is on the way back to greater things.

Be certain to listen to the game Saturday at 1 p.m. on HitThatLine.com and on the air at ESPN Arkansas 95.3 in the River Valley, 99.5 in Fayetteville, 96.3 in Hot Springs and 104.3 in Harrison-Mountain Home.

Andy squeaked by last season. I sense his anxiety as the student has now become the master.

Bowling Green at Tennessee: I missed the deadline on this one, but Hodges knows I would have taken Vols by 20.

UL Monroe at Kentucky: This one will still be close midway through the third. Wildcats by 17.

Rice at Arkansas: See above. Arkansas is stronger, better, and hungrier. Hogs by 17.

(1) Alabama at (14) Miami: Months ago my good friend Hermon (who claims to be an Ohio State fan) asked if this game would show how weak and overrated the SEC really is.I am still laughing. Tide by 30.

Louisiana Tech at Mississippi State: This one also may be close than some predict? Nope. Bulldogs (the ones from MSU) by a lazy 22.

Central Michigan at Missouri: Why am I almost rooting against an SEC team versus a cupcake here? Tigers by 30.

Akron at Auburn: Even the refs will not need to assist in this no-contest. Tigers by 37.

Eastern Illinois at South Carolina: USC seems like they are pumped to make a run this season. I am probably wrong. This week though, they will prevail. Gamecocks by 24.

(5) Georgia at (3) Clemson – GAME OF THE WEEK: My one concern for the SEC this week falls under my “Game of the Week” selection. Kirby Smart is saying all the right things, yet his tone is … Well, he doesn’t sound as smarmy and confident in this Week 1 match-up in comparison to the visor donning persona to which we have become accustomed. I may be reading too much into it, yet my deduction is telling me Tigers by 3.

Kent State at Texas A&M: Jimbo says “show me the money” to the boosters. A&M will have a great season. Aggies by 40.

ETSU at Vanderbilt: Outside of the ranked vs ranked match-ups and Rice at Arkansas, this game has the most promise of being a tightly contested game. Commodores start 1 – 0 in ’21. Vandy by 10.

(16) LSU at UCLA: Those waiting on cards will have at least another week to enter Death Valley. The Bruins will take shot after shot yet come up short against LSU. Pfizers … I mean, Tigers by 18.

Louisville at Ole Miss: This game also has promise. Something tells me the Rebels will run away with it until they call off the dogs. Ole Miss by 34.

That’s it. The chase for the Hit That Line Cup begins anew. It has a new home after this year, AH, but you had still better bring your A-game.

Oh, and Ladies, if you’re looking for a football snuggle buddy, I know the perfect guy next door.