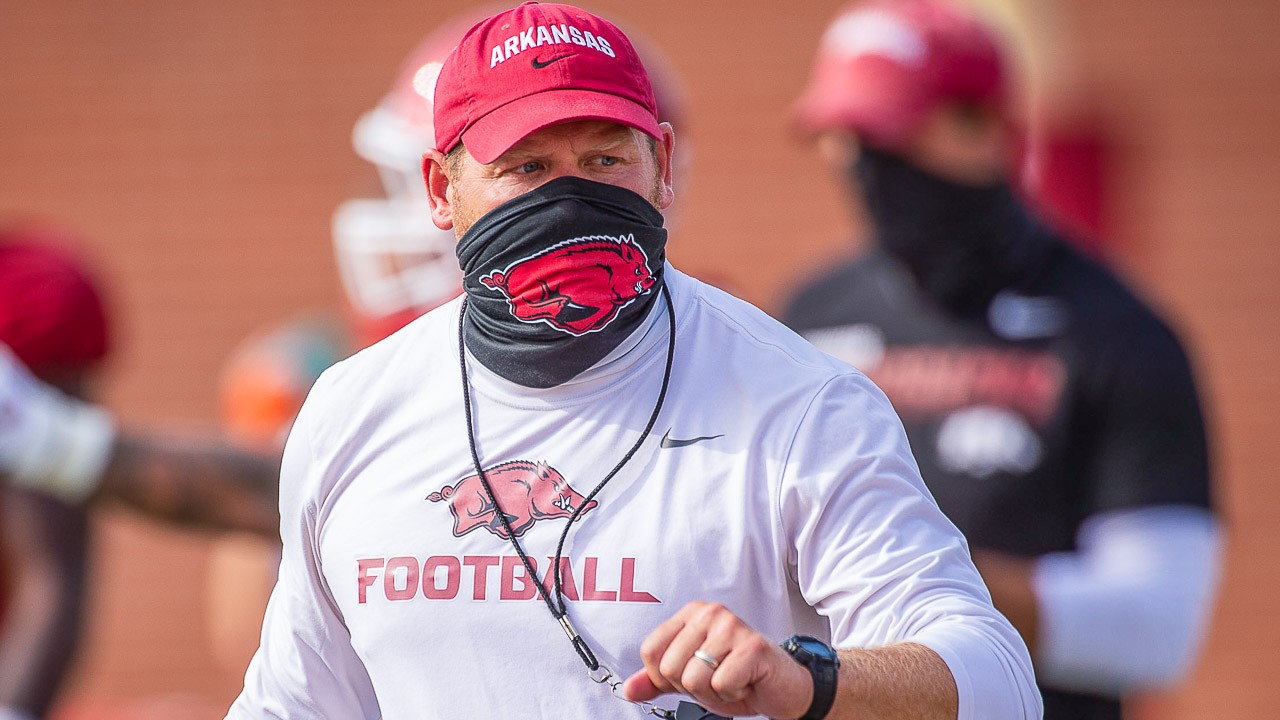 In January 2014, the Razorback football program was at a crossroads. Heading into his second season at the helm, then-head coach Bret Bielema knew he needed to revamp a defense that had been repeatedly gashed under former defensive coordinator Chris Ash as the 2013 Hogs stumbled to 3-9 season.

Bielema chose to go with Smith, who lasted at Arkansas for three seasons. Few doubt he would have hit a home run had he gone with Odom instead.

Odom, of course, is prove himself a great Arkansas defensive coordinator six and a half years later.

This season the Hogs’ defense has been a revelation, currently ranking No. 8 nationally in defense efficiency. Just two spots behind Arkansas is Rutgers, which forced seven turnovers in its season-opening 38-27 upset of Michigan State.

Alongside the Scarlet Knights’ head coach Greg Schiano, the man masterminding Rutgers’ 2020 renaissance is none other than Robb Smith.

While both Odom and Smith are now lauded as heroes with their current, feel-good story programs, they also know what it feels like to be scapegoats.

In the early 2010s, Smith helped lead Rutgers to its most successful era of modern times.

As defensive coordinator, he orchestrated a 2012 defense that ended as No. 4 in the nation in the points allowed per game.

He then spent the 2013 season in the NFL, coaching linebackers for Tampa Bay. That Buccaneers team, which finished 4-12, was a far way off from Tampa’s current status as a leading NFL title contender according to the latest Super Bowl odds.

Smith landed at Arkansas the next year and, despite some early-season hiccups, got the Hogs rolling in the second half.

Behind big-time contributions from upperclassmen like linebacker Martrell Speight, tackle Darius Philon, end Trey Flowers and cornerback Tevin Mitchell, those 2014 Razorbacks clocked in at No. 10 nationally in total defense.

In the next two seasons, Arkansas didn’t recover well from the departures of those 2014 defensive stars and struggled mightily at the linebacker and in the defensive backfield, while the defensive line failed to live up to its talent.

In early 2017, Smith and Arkansas had a “mutual” parting of ways and Smith ended up as the defensive coordinator in Minnesota, where a similar dynamic played out in a shorter period of time.

Smith’s 2018 defense was so bad that Golden Gophers coach P.J. Fleck let him go in the middle of the season.

He spent a year as an analyst at Texas A&M before Greg Schiano, rehired as Rutgers head coach for the second time, brought him back to Rutgers in early 2020.

Like Smith, Odom has had his shares of ups and downs and ups again.

Odom burst onto the national coaching scene as a rock star defensive coordinator for Memphis, where he improved the Tigers from No. 117 nationally in total defense to No. 28 in the span of three years.

Odom later spent four seasons as Mizzou’s head coach. Missouri got better through those first three seasons before an up-and-down 2019 season that ended with Odom’s firing.

After coming to Arkansas in December, he’s now leading the best Razorback defense since that 2014 unit under Smith.

The two men know well what it means to be lauded as a genius, then raked over the coals, then loved again.

Smith knows that when Arkansas’ defense was struggling in 2015 and 2016, it wasn’t because he suddenly forgot how to teach great tackling fundamentals and how to scheme for opposing offenses.

Instead, he was simply having to adjust to the fact that he no longer had the same caliber of talent as before, and for whatever reason he couldn’t motivate the players he still had to perform to the same level as in previous seasons.

Same goes for Odom during Mizzou’s 5-game losing tailspin in 2019.

The advantage both men have in 2020 is that they are coaching players who are sick and tired of massive losing streaks and being laughed at by other programs’ fans.

As extreme underdogs, these Scarlet Knights and Razorbacks came into 2020 ready to rock haters’ worlds.

Odom and Smith have proven they can deliver a standout season here and there.

But their ability to string a number of those seasons together will ultimately determine whether they are considered merely good coordinators, or great ones closer to the status of Clemson’s Brent Venables, Kirby Smart (both as Alabama’s defensive coordinator and now as Georgia’s head coach) or John Chavis, who got in a good 20 years before the wheels fell off at Texas A&M and Arkansas.