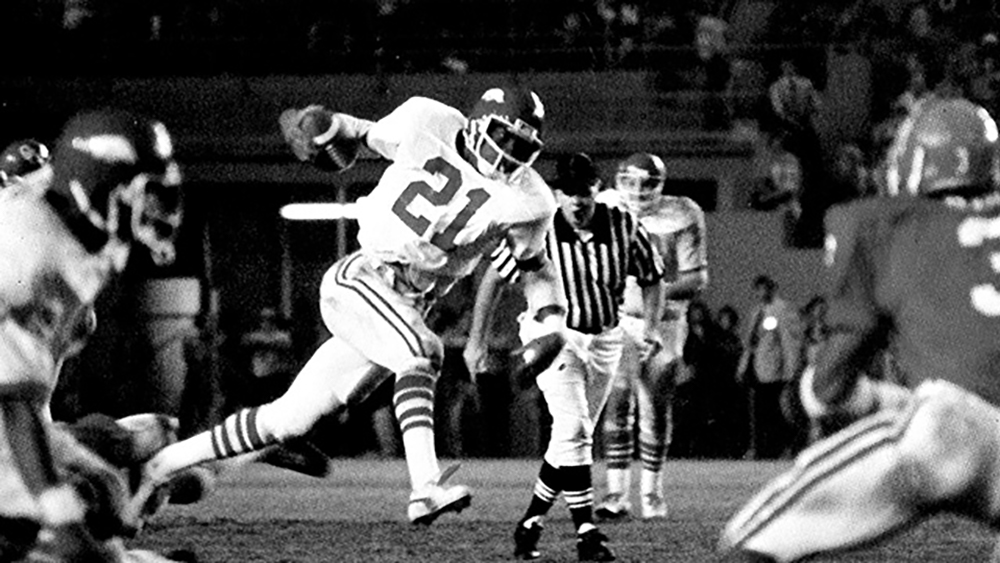 During this downtime in the world of Arkansas sports is a good time to look back and wander a couple of times down memory lane for the best of times … and maybe some not-so-great.

We kick it off with the Top 10 Surprises of Razorback football.

Notice that doesn’t say top 10 top wins, but games that, well, didn’t exactly end up the way  I thought they would going in. The Hogs have had some surprising losses, too. Some of those were downright gut-wrenching for fans.

Oh, and these are my Top 10. The whole thing is subjective. It’s an opinion and my opinion is never wrong, despite the fact you may not agree (and that also means your opinion isn’t wrong, either).

For this I only included games I saw with my own eyes and I’m not relying on accounts.

1977 win over Oklahoma in Orange Bowl

Hands down, nobody expected No. 6 Arkansas to have a shot against second-ranked Oklahoma in the Orange Bowl. Well, maybe Lou Holtz and Monte Kiffin suspected it, but finding anybody else that gave the Hogs a shot in Miami weren’t speaking up.

Considering the Razorbacks were without several starters and had Roland Sales starting at running back, the sports books even took the game off the board for awhile in Vegas.

The stadium was a little strange, too. The game started late (the Rose Bowl rang long with Warren Moon leading a comeback win over Michigan), the Sooners had a fullback fall out of his stance after OU accidentally fired a cannon, it had rained … and neither side could believe how their respective teams were playing.

The Sooners were over-confident and un-motivated. Defensive coordinator Larry Lacewell had finally gotten coach Barry Switzer to look at the Hogs on film two days before the game and they both knew they were in trouble then.

Then Holtz threw a wrinkle into the mix, turning Oklahoma’s hard-charging defense against them and opening up huge holes for Sales and others with one semi-decent block on each play.

Arkansas finished No. 3 in the final polls and had as good of a claim to the title as anybody else, but nobody saw that win coming.

It’s going to take something big to top that.

To this day I still haven’t seen an entire state as electrified as Arkansas was the first week in December 1969.

And it’s doubtful so many hopes were crushed in just a couple fo hours, especially blowing a lead in the only game doing on in college football that day AND on national broadcast television.

That 15-14 loss haunted Frank Broyles until he died, reportedly without ever looking at the film or replay of the game.

1989 loss to Tennessee in Cotton Bowl

In Dallas, Arkansas appeared to be rolling through a season where they stumbled midway against Texas but had figured out a way to beat everybody else, including a fortunate pass interference call at Texas A&M.

On a cold day in Dallas, the Hogs turned the ball over too much, Tennessee got a big day from Chuck Webb and Andy Kelly had a career day. The Vols held off a late charge for what was, to me anyway, a surprising loss.

1968 win over Georgia in Sugar Bowl

Georgia was the typical SEC champion for that day and time … a defensive powerhouse that controlled the ball on offense and didn’t make mistakes.

Bill Montgomery and Chuck Dicus kept Arkansas rolling on a bright, sunny day, in New Orleans and the only points the Bulldogs got was a safety when Bill Burnett got tacked in the end zone.

In a season with anticipation that was dashed after a 2-4 start, the Razorbacks stumbled into Oxford against an Ole Miss team looking for an SEC West title after beating Alabama.

Arkansas matched the Rebel’s high-flying offense and got the game into overtime before the legendary fourth-down play where Hunter Henry just threw the ball backwards, Alex Collins picked it up and got the first down set up Brandon Allen’s late heroics for an overtime win.

It was a win that ignited a big November for Bret Bielema in his best season with the Hogs.

1965 win over Texas in Fayetteville

After winning an off-brand version of a national title in 1964, Arkansas was trying to win one of the big ones the next year, but the Longhorns were in the way.

The Razorbacks built a 20-0 lead at halftime, then couldn’t stop the Longhorns from going on a 24-0 run as Frank Broyles melted down on the sidelines. He gave all the credit later to Jim Lindsey for rallying the team (“I was a babbling idiot,” he said later) and in one of the legendary drives, the Hogs drove down and scored on a 1-yard sneak by Brittenum.

Arkansas rolled the rest of the way until meeting LSU in the Cotton Bowl.

Arkansas didn’t have much chance against No. 1 USC as Broyles was struggling to put things together during a slump but it all came together on a September night in War Memorial.

The Trojans couldn’t do much right. Oh, Anthony Davis returned a Steve Little kickoff 109 yards, but that was about it. At one point, USC quarterback Pat Haden dropped back to pass … and set his plant foot on the back line of the end zone for a safety.

The Hogs started in the Wishbone with Mike Kirkland at quarterback, but that didn’t last the entire season and they limped to a 6-4-1 season.

USC won the UPI national championship. It was the end of a three-year series against the Trojans, who came to Little Rock twice in that time frame.

Arkansas came in looking for a win to go to the Sugar Bowl in a tie with the Tigers for the second spot in the league (Alabama had fallen after beating the Hogs in Fayetteville earlier).

LSU didn’t have a whole lot of interest in playing the game, giving up a touchdown just before halftime on a Ryan Mallett pass and Bobby Petrino wasn’t playing it safe.

Quite frankly I didn’t think the Hogs had much of a shot in that game and LSU kept it close.

After a loss in the Sugar Bowl, Arkansas finished No. 12 in the final polls while the Tigers were No. 8 after blasting Texas A&M in the Cotton Bowl.

2006 loss to Florida in SEC Championship

Arkansas had lost a shootout to LSU in Little Rock the week before, but had already secured the West title and all they needed was a win over the Gators to go to a national championship game after UCLA’s upset of USC earlier.

For awhile it looked possible.

Then Florida blocked a punt, Reggie Fish fumbled a punt taking my prediction of the Razorbacks going to a title game right along with it.

No. 2 Arkansas was riding a 22-game winning streak going into a cold, gray, Dallas morning and LSU was 7-3 with little respect.

But quarterback Jon Brittenum was injured in the first half and we found out Ronnie South wasn’t quite ready to take over plus the Tigers had Joe Labruzzo and the Hogs couldn’t get him on the ground when they needed to, falling 14-7.

There were a lot of misty eyes all the way from Dallas back to Arkansas for a lot of fans after UCLA knocked off top-ranked Michigan State in the Rose Bowl and Alabama leap-frogged into a national title.