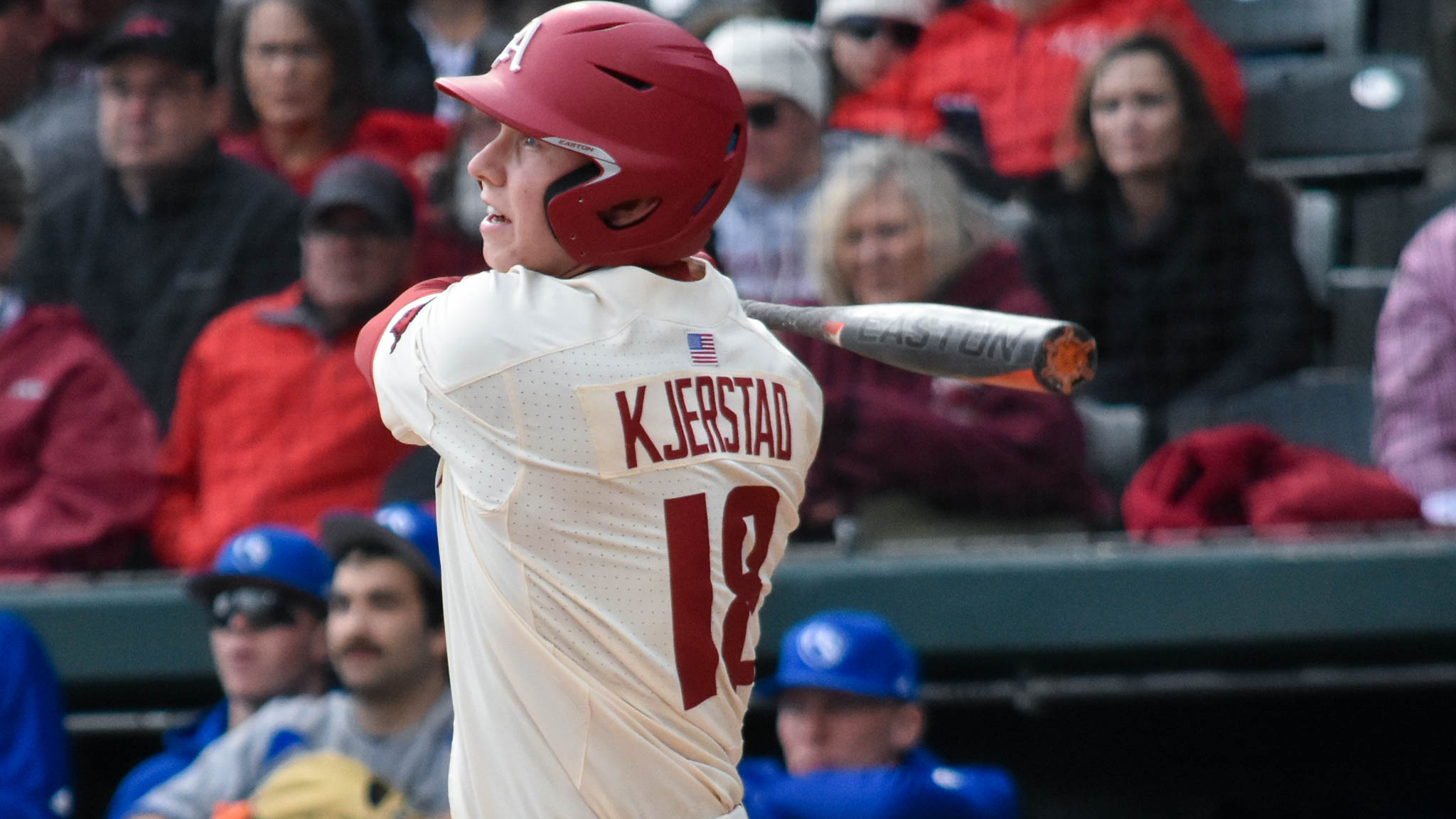 Carpenter, a former Razorback player and Major League Baseball alum, said during the broadcast of Friday’s opener against Eastern Illinois that Kjerstad could fill a spot in an MLB lineup today.

“That’s a bold statement because those big leaguers probably would take offense to that because they had to work their way there,” Razorbacks coach Dave Van Horn said. “But Heston’s well on his way.”

Kjerstad lived up to the hype, torching Eastern Illinois pitching in the opening series. Kjerstad blasted four home runs and hit .583 with 10 RBI in the sweep of EIU.

“I don’t have anything to say [on Carpenter’s comment] honestly,” Kjerstad said sheepishly.  “I am just playing baseball [at Arkansas], and we will see what happens.”

The lefty right fielder hit two titanic blasts in a 12-3 win over the Panthers Sunday. He also stroked the first pitch he saw in his final at-bat off the center field wall for a standup double.

He finished 3-for-5 with six RBI after Curtis Washington pinch ran for him in the seventh inning.

“I’m kind of running out of words,” Arkansas senior catcher Casey Opitz said. “He’s been doing the same thing for three years. So, he’s just going to keep doing it this year. It’s fun to watch. It’s fun to have him on our team.”

Opitz is right, but Kjerstad may even be better this year. Van Horn has seen a difference in workouts leading up to the season.

“He hasn’t stopped hitting since he walked back on campus for his junior year,” Van Horn said. “He’s taking more pitches. He’s being a little more patient, not going after balls in the dirt as much, not pressing.

“He’s really developing as a hitter. He’s learning, and he’s going to be a tough out this year.”

On Sunday, Kjerstad, who hit four home runs in the series, showed the confidence of one of the best players in the country. When he stepped to the plate, the Hogs’ faithful held its collective breath expecting something spectacular.

For some reason, EIU didn’t intentionally walk him in the seventh inning with first base open. Kjerstad nearly hit his third home run of the day as he drilled the first pitch from EIU reliever Ben Stephens off the bottom of the center field wall.

The crowd greeted him with a standing ovation as he exited the game and capped off an epic weekend.

“He reminds me of Paul De Jong of the [St. Louis] Cardinals when he was in college at Illinois State, and he obviously has a bright future ahead of him,” said EIU coach Brian Anderson, who pitched with three different MLB teams. “We would have loved to pitch around him, but they didn’t give us a chance to do it.

“We were able to pitch around [Casey] Martin a little bit, walk him a few times and just go after the next guy, but it just kind of hard when that lineup is so good.”

Cleanup hitter Matt Godheart hit behind Kjerstad and finished 3-for-6 with an RBI and moved his average to just over .300 for the weekend. The preseason All-American Martin was held at bay only hitting .200 in the fifth hole.

Braydon Webb was a bright spot leading off the lineup going 2-for-6 Sunday and hitting at a .357 clip to begin the season.

Arkansas has one of the more dangerous lineups in the country and would be a favorite to go to Omaha even if it didn’t boast a standout pitching staff. The Hogs will score runs in bunches as witnessed this weekend.

And Kjerstad did look like out of place on a college diamond this weekend. Van Horn and Co. are glad he won’t be getting called up to the big leagues this year.

“[Kjerstad] is definitely a player we want on our side against the competition,” Webb said. “He’s a hard worker, and he earns everything he gets. He had a great weekend.”