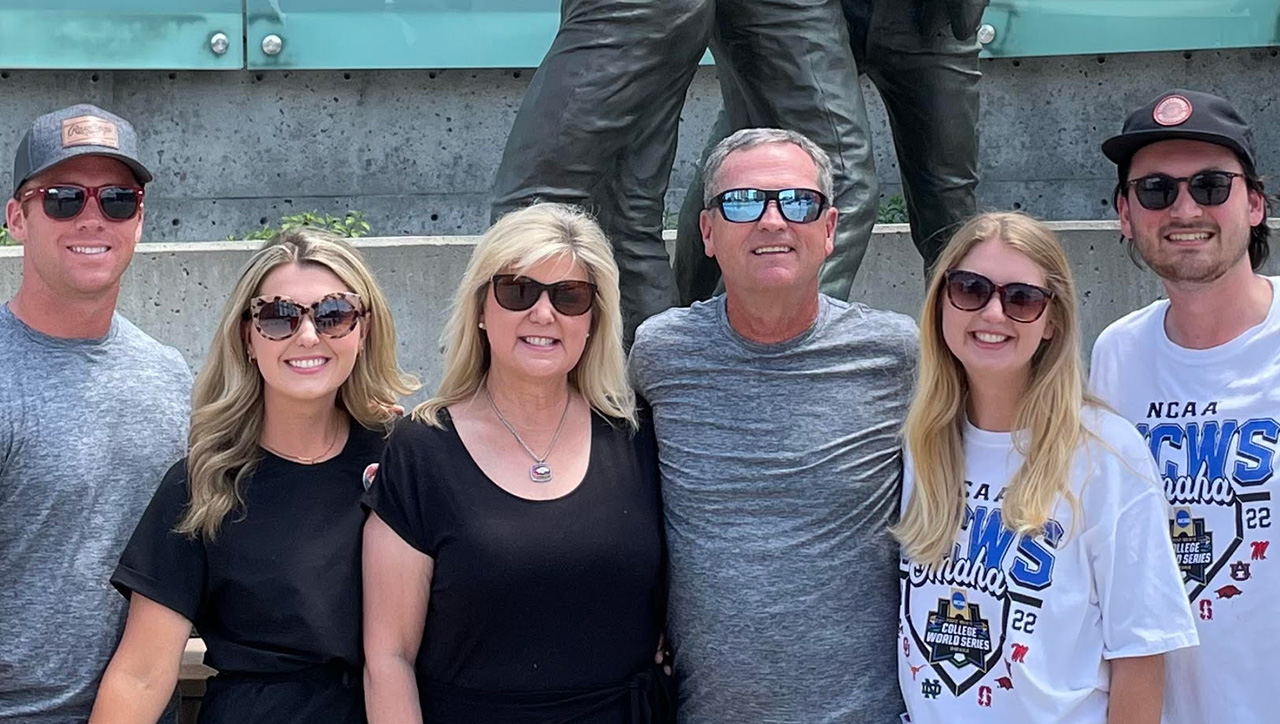 The Razorbacks took two of three games over the Rebels in late April when Arkansas outscored them 12-10 across the three-game series in Fayetteville.

“It helps just building that scouting report and just seeing how the pitches move,” Webb said Sunday. “Every game is different. We’ve got to come out with a good game plan, which we will and just continue to play with that edge that we have.”

Arkansas coach Dave Van Horn in front of the statue out front of Charles Schwab Field in Omaha.

Arkansas’ game plan worked to perfection in Saturday’s 17-2 win over Stanford that put the Hogs in the winners bracket in Omaha. Ole Miss downed SEC West foe Auburn 5-1 Saturday night to set up a rematch with the Razorbacks.

The Rebels have not lost a game since the regionals started, and they have outscored opponents 51-12 across that six-game span. It is safe to say Arkansas will see a different Ole Miss team than the one they faced in late April.

Elliott is a freshman left-hander who has surrendered just one run in two postseason starts. In his last start against Southern Miss in the super regionals, Elliott threw 7 ⅓ scoreless innings and struck out 10 batters.

“He can spot it up with the best of them,” Van Horn said. “He’s a strike-thrower, he’s mature, strong for his age. He has been really good.”

On top of having a confident starter, the Rebels saved plenty of bullpen arms with a quality start from ace Dylan DeLucia, who threw 7 ⅔ innings of one-run ball in Saturday night’s win over Auburn.

Freshman right-hander Josh Mallitz threw just 1 ⅓ innings in the win over Auburn, so he would be good to go against the Hogs. Mallitz has been lights out this year with a 1.24 ERA in 29 innings pitched.

The Rebels’ lineup has been hot as of late and it all starts with the powerful first baseman Tim Elko, who is hitting with a .455 average, 10 RBIs and three homers this postseason. Elko was 1-4 with two strikeouts against Auburn on Saturday.

Left fielder Kevin Graham found success at the plate against the Tigers, going 3-5 with two runs scored. Designated hitter Kemp Alderman drove in two of the Rebels’ five runs with a two-RBI single in the first inning.

“I think about Graham more than any of them; he really got that lineup going again,” Van Horn said. “It’s one through nine, there aren’t any easy outs there.”

Ole Miss, unlike Arkansas, has not slugged a ton of longballs to score the majority of its runs. The Rebels are a team that does a good job of manufacturing runs with base hits and keeping pressure on opposing pitchers.

Five of the usual nine starts for Ole Miss are hitting with a sub .300 average this postseason, so the key for Arkansas will be to limit the amount of runners on base. As soon as Ole Miss puts runners on, it usually capitalizes.

“Our comment has always been that if they get it going, they’re as good as anyone in the country,” Van Horn said. “I mean, this team was preseason ranked really high, top-five.”

Arkansas and Ole Miss will get things going at 6 p.m. at Charles Schwab Field in Omaha. You can watch the game on ESPN.