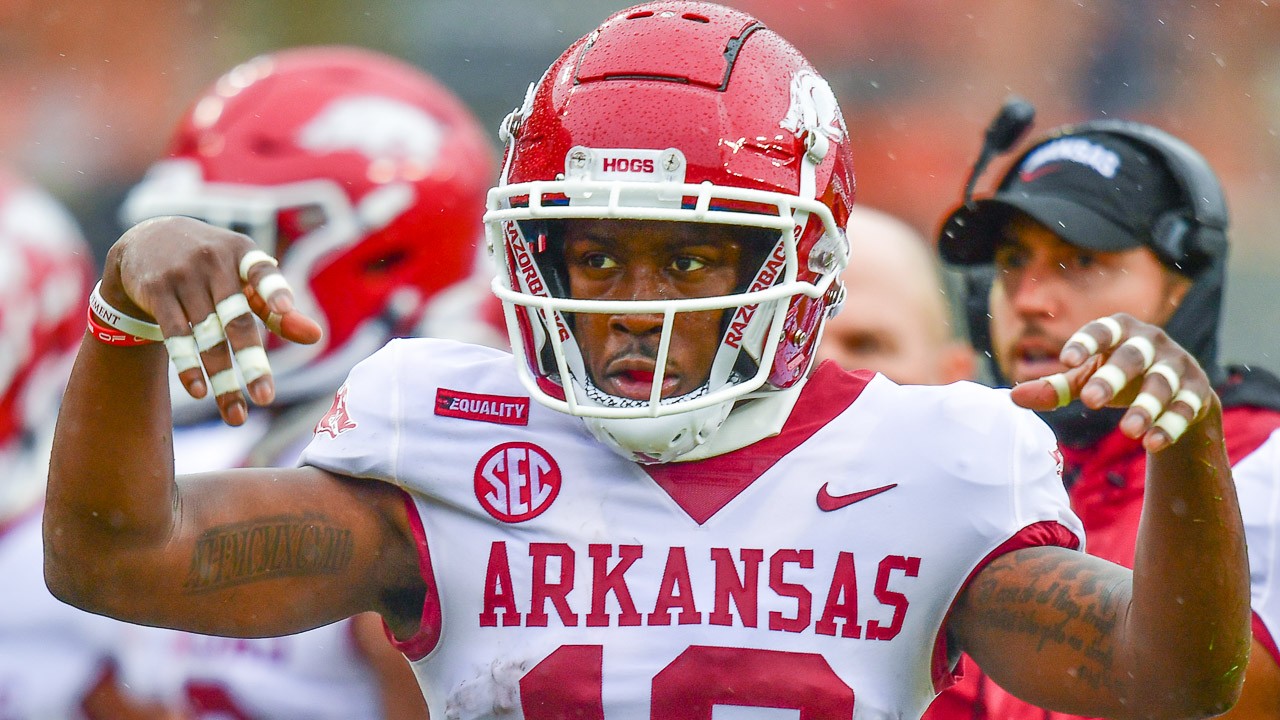 4Q :07: Auburn’s Anders Carlson kicks a 39-yard field goal that barely sneaks in after officials blow a backwards clock play that should have been a fumble recovered by the Hogs. Auburn 30, Arkansas 28

4Q 5:29: Arkansas has battled all the way back and is now in front of Auburn after a 30-yard pass from Feleipe Franks to a De’Vion Warren, who had gotten behind the Tigers’ defense. A.J. Reed added the extra point and the Hogs have their first lead of the day. Arkansas 28, Auburn 27

4Q 11:37: Arkansas squanders a Red Zone opportunity and has to settle for a 23-yard field goal by A.J. Reed after pulling Feleipe Franks for freshman Malik Hornsby and the Tigers stuffed him on two straight runs. Auburn 27, Arkansas 21

4Q 14:51: Auburn quarterback Bo Nix finds an answer in speedy wide receiver Anthony Schwartz for a 17-yard score with 14:51 to play and the Tigers open a nine-point advantage. Auburn 27, Arkansas 18

3Q 4:14: Running back Trelon Smith converted key third downs for Arkansas and made the plays necessary to spark a 13-play, 85-yard drive but can’t convert yet another 2-point conversion and Auburn clings to a slim lead. Smith, filling in for Rakeem Boyd who was injured last week, has 69 yards rushing and has added another 64 on pass receptions (mostly runs after the catch). Auburn 20, Arkansas 18

Unless something dramatic changes in the second half, for Arkansas to get a second straight win, the offense is going to have to get some momentum.

Auburn leads at halftime, 20-12, as Feleipe Franks struggled early to get any consistency before finally seeming to get it together late in the second quarter.

The Razorbacks’ defense has been assaulted by the Tigers’ running game for 215 yards in the first half while the offense struggled as Trelon Smith started for the injured Rakeem Boyd (who did not make the trip to Auburn).

Arkansas had just 55 on the ground, but finally managed to start moving the ball through the air as Franks was 12-of-17 for 148 yards and two touchdowns in the first half.

The special teams continued to only be special at consistently making mistakes. The second blocked punt in three games led to Auburn’s first score and a dropped snap on an extra point now means the Hogs will have to juggle the scoreboard in the second half

2Q :38: After the Hogs get a score, Auburn answers with a six-play, 57-yard drive using big passing plays to eat up chunks of yardage before the defense stiffense and Anders Carlson kicks a 25-yard field goal. Auburn 20, Arkansas 12

2Q 2:15: The Hogs’ offense makes you wonder where it’s been all day as the defense gets another midfield stop, then Feleipe Franks finishes off a 75-yard drive in six plays that used just two minutes. Trey Knox couldn’t haul in a 2-point pass on the back line of the end zone. Auburn 17, Arkansas 12

2Q 6:24: Arkansas finally gets some offense going, moving 65 yards in eight plays, ending with Feleipe Franks throwing an 8-yard scoring pass to Mike Woods in the back of the end zone. The special teams managed to blow an extra point, dropping the snap from center. Auburn 17, Arkansas 6

1Q :36: D.J. Williams scampered 41 yards down the left sideline as the defense can’t tackle him but then Auburn’s offense bogs down before Anderson Carlson kicks a 47-yard field goal and the Hogs finally conclude a first quarter of struggling. Auburn 10, Arkansas 0

1Q 4:32: Hogs’ special teams gives up the second blocked punt in three games as George Caratan has one blocked by Jordyn Peters and recovered by Barton Lester in the end zone for the first score. Auburn 7, Arkansas 0

Arkansas and Auburn off to an ugly start in the rain as the two teams are about as evenly-matched early in the first quarter as the stats indicated.

The problem with the Razorbacks is getting backed into starting every drive near their own goal, which is not good with the weather conditions.

The passing game is being used much more than most people expected as Trelon Smith for the Hogs and Tank Bigsby for the Tigers have ripped off some runs, but not consistently.

Franks twice has been sacked when he should have taken off with the ball as the Hogs’ offense is mis-firing (going 3-and-out twice).

Oh, the crew on SEC Nation on Saturday morning before the games is complimentary of what Arkansas did, but they aren’t believing.

“You don’t go from losing 20 straight in the SEC to winning two in a row,” analyst Roman Harper said in picking the Tigers to get a win.

None had anything negative to say … they just aren’t buying into what the Hogs did and obviously are still buying into the Gus Malzahn-Chad Morris hype.

You can listen to all of the pregame and the game online at HitThatLine.

The broadcast is available on ESPN Arkansas 95.3 in the River Valley, 96.3 in Hot Springs and 104.3 in Harrison-Mountain.

Don’t forget Razorback Reaction after the game … win or lose.