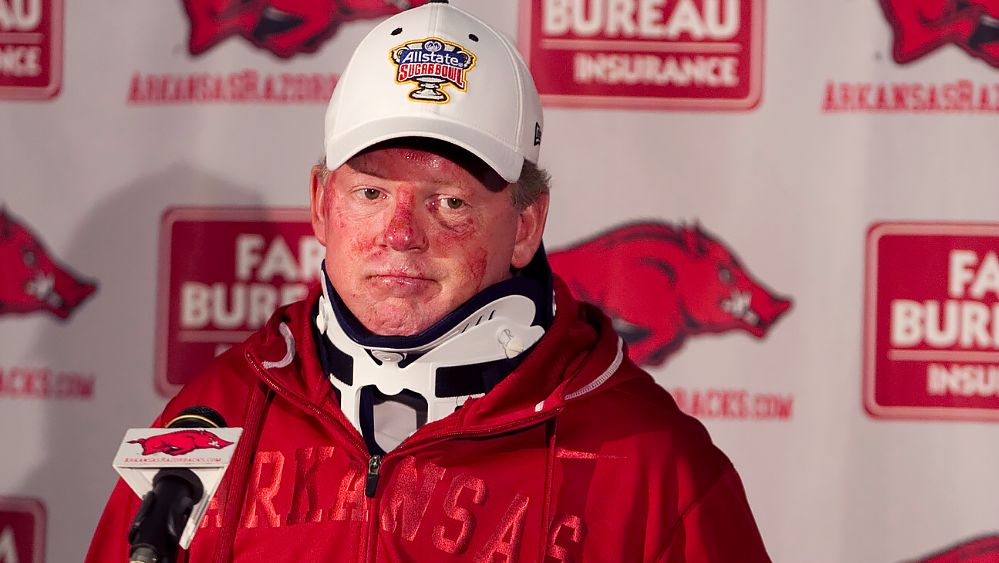 It was eight years ago that Bobby Petrino flew through the handlebars on the road to Elkins and for many Arkansas football fans the program hasn’t gotten out of that ditch to this day.

The day after that, April 2, 2012, was a day many were accepting Petrino’s explanation but it was interesting that athletics director Jeff Long seemed a little reserved buying everything at face value.

That was why I said on a radio program that morning that “we’ll see if Long buys that or calls BS on it.” It was early, I was still half asleep as a guest on the show and it just sorta came out … that happens in the radio business, by the way.

Watching the news reports the previous night and reading things something just didn’t seem right. Quite frankly, I didn’t know if we’d ever find out what really happened, but when a state trooper wasn’t going to get fired over Petrino’s reconfigured version of events it started spilling out.

Long then had his own little cover-up that had nothing to do with trying to shield Petrino but the fact he snatched the opportunity to become the front man. Multiple people in positions within the athletic department at the time have said Petrino was offered a way to keep his job but arrogantly declined.

So Long, who was as equally arrogant and an ego maniac close to Petrino’s level, fired him and did his best to come out as the hero. He parlayed that into being the first chairman of the College Football Playoff a few years later.

The combination of those two people set things on a path that, in hindsight, makes perfect sense.

Both were dictators that didn’t want anybody putting anything out there they didn’t get to sanitize first. Both were completely incompetent to run a program at the high-profile level of the SEC. They were both masters of illusion.

Petrino left a trail of broken promises, back-stabbing and selective amnesia everywhere he’d been. At one point he actually boarded a plane to visit with one school about replacing a head coach that he’d worked for at one point.

If nothing else, Petrino showed for four seasons that Razorback fans would look the other way on a dictatorship as long as his offense lit up the scoreboard most fall Saturdays. They would be so enthralled by his X’s and O’s they didn’t see the train wreck coming.

It’s a track record that continues to this day. Petrino really hasn’t shown he’s capable of coaching at any Power 5 conference (or the NFL) for more than a couple of years. He doesn’t have the people skills. That’s why he only won 56 percent of his games when he finally stayed somewhere five seasons.

Nobody could see that eight years ago. The truth is the Hogs weren’t going to win a national title in 2012 (despite Beano Cook’s prediction) even if he stayed. That was a 6-6 team with no depth behind the starting 22 players.

Long simply was on a quest for power. He got it by getting rid of just about everybody with traditional connections, pretty much trying to create a new path forward that fit his plan of a never-ending supply of money that the Razorback Foundation could keep hauling in.

He didn’t worry about the future because the guess here is he didn’t plan on being around when the bill’s due date arrived.

Long didn’t want any adult supervision and basically conned his way into getting that. He gave Bret Bielema a ridiculous raise and buyout after a 7-6 regular season, then wrote his own contract with a seven-figure buyout in case he got fired.

In other words, he wrote his own insurance policy. When he announced plans to tear down the North End Zone facility he got some pushback from former Senator David Pryor, but not a lot of other people who were riding high off some mediocre results the previous two seasons.

Two power-hungry ego-maniacs without adult supervision are the reason the Hogs’ football fans find themselves in a position with an average between four and five wins a season over the last eight years.

Don’t tell me about the other programs. The main cash cow at schools in the SEC is football. ESPN isn’t paying the league mega-millions every year to broadcast basketball, baseball or track meets.

That’s reality. To this day it’s hard to find anybody that worked directly for them that was disappointed to see either one leave

It’s also why the first couple of days in April will be etched in the minds of Razorback football fans for a few more years.

Or there are enough wins to wipe out nearly a decade of the result of incompetence colliding with arrogance.