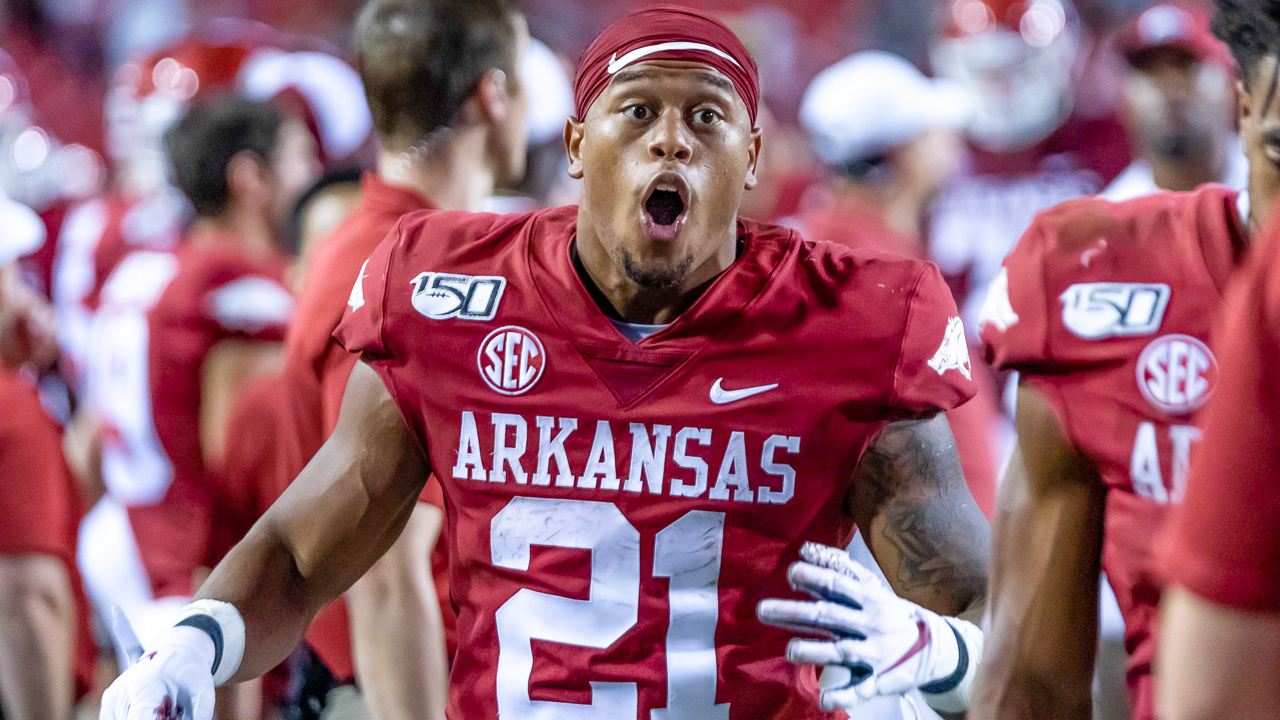 “We are tackling the Spartans like they are playing a game of bumper pool,” — Eric Soller.

Last Saturday, we wept and felt embarrassment. On Sunday, we felt anger. The same sentiment haunted us on Monday, Tuesday, and Wednesday. Thursday we were numb.

Honestly, lacking my general hope and enthusiasm for all things Razorback, my hope was Phil Elson would record something as motivating and inspiring as he did when the OmaHogs defeated Ole Miss to confirm their reservations in Nebraska.

Unfortunately, given the state of of the Arkansas football program, I take solace in the fact even Matt Foley had to occasionally admit defeat.

Jimbo Fisher’s 23rd ranked Texas A&M Aggies and Chad Morris’ Arkansas Razorbacks meet in neutral territory this Saturday at Arlington with the Hogs being listed as the home team.

And before you make a trip to Dallas or watch the game on ESPN (all while streaming and enjoying the contest even more by listening to the live audio on HItThatLine.com), we invite you to muse over our thoughts on possible outcomes.

No worries. Like Houston Nutt’s success at Ole Miss, we will be brief.

One thing to consider is while both Arkansas and A&M are 2-2, there is a reason why the Aggies continue to be ranked. Both losses came to Top 10 competition.

Arkansas? Not so much. In fact, if college football had an opposite to the Top 25, both of our losses might be from programs which would fall under that designation.

The Aggies are better from top-to-bottom. There is zero doubt. They have great talent, a lot of heart, and they are well-coached.

As much as I hate to admit it, the Razorbacks are in trouble, yet upsets can and do happen.

RELATED:   Haselwood commits to Razorbacks a week after entering portal

If the Hogs want to end a losing streak to their old SWC foe they will need to execute what works for them and dismiss anything to the contrary.

Here is a small list containing other points of emphasis for the casual Arkansas fan to consider if the Razorbacks have any hope of leaving Jerry Jones’s Palace near Dallas alongside a disarrayed group of Texas A&M faithful:

• The offensive line has to perform. A&M’s defensive line is being critiqued as mediocre (depending upon the source).

This could give fans a false sense the offensive line of Arkansas may be able to hold their own when it comes to opening holes for the backs and for affording the receivers and quarterback Nick Starkel time to get open and release the ball, respectively.

I fear we will be even further exposed in this area. The Aggies have faced great offensive lines whereas the Razorbacks have lined up against less than stellar opposition.

• Speaking of Nick Starkel, my unfamiliarity with him leaves me indecisive on whether he needs to forget he was denied the QB1 spot by Jimbo Fisher or if Starkel has the mentality to use it as motivation.

Obviously, our hope is he plays clear-headed and free of negative emotions to ensure a focus which seemed to dissipate against … well, who needs that reminder?

• The Hogs might consider keeping the Aggies offense off of the field.

Yes, Morris’ offenses have primarily been designed as high-octane, “hammer down”, score quick, and score often. If we could execute this consistently then why not take the approach?

Unfortunately, our defense is not built to spend a lot of time on the field (although some recent opening drives from our opponents have not provided the testing to assist in verifying this hypothesis), and the more game time we spend on this side of the ball the more our foes have seemed to produce.

Could we take advantage of the defensive stops we will have, slow down our offense, and avoid a shootout? Possibly.

• Hey, are you still reading this?

• Where are U Now, Justin Bieber? No offense to the teen heartthrob, but so many of us have been hoping since the discovery of Starkel’s gameday attire he would lose, hide, or burn the distraction of the black and white T-shirt.

Oh, and if you are still reading this, my apologies. Coach Dale Dooley bet me $50 I would not bring this up.

• A primary focus on the secondary. Our defensive backs seem to have bad penalties at (of course) crucial times.

I realize they do not want to lose sight of and an attempt at containment upon the receiver, yet they also need to be able to turn around and track the ball.

We cannot continue to place a judgment decision of defensive pass interference onto the officials. It harmed us last week. It will be our demise this week.

• Stop Kellen Mond. Nick Starkel’s successor (so to speak) is not the greatest dual-threat quarterback to ever graze the fields in College Station. [Oops, did I say “graze”? I meant ‘grace’. A&M does not celebrate a homecoming thus no queen exists to divert my faux pas as a Freudian slip.]

Mond is not the best runner, yet the Twelfth Man seems to call for him to be more proactive in tucking the ball and running while the word on the Manziel-paved streets seems to be Fisher is opposed to this strategy.

Hopefully this assists the Arkansas defense in applying pressure against a quarterback hesitant to take off yet slow to get through all of his reads.

On a side note, if things do not progress on The Hill in the near future, not only is this our best chance to beat A&M for a while, it’s our greatest shot of winning an SEC game outside (or even inside) our state’s borders.

Add to that a decline in attendance for the Southwest Classic will easily end the contract we have to play within what is probably the nicest stadium in the world, and nothing outside of some great talent is looking bright for our future.

Final verdict: As mentioned, upsets do happen, just not this week no matter how many Hogs fans show up in the home of the Cowboys.

I DARE you to prove me wrong, Razorbacks players and staff. I just do not believe you have it in you to do so.

Mr. Andy Hodges and I had a push in last week’s contest. I still remain one game behind. It’s the art of the hustle, Andy.

I stay back, I intentionally make mistakes, and I even put a little Aspercreme on my knees to lull you into a lazy sense of confidence before I claim what is rightfully mine.

Last season you won easily. This time, you have found yourself in a ring of fire.

Northern Illinois at Vanderbilt — This one is tough to call, so I’ll used deductive reasoning. Arkansas could probably beat the Huskies. Vanderbilt definitely will. Commodores by 14.

Ole Miss at (2) Alabama — Remember when Ole Miss beat Alabama a couple of years in a row (excluding the Ole Miss sanctions) and the Rebels would not shut up about it for at least the next four? That trend will move to five as they will not have this game for which to brag. Tide by 38.

Towson at (9) Florida – Simply put, we have never heard of them either. Gators by 34.

Mississippi State at (7) Auburn [GAME OF THE WEEK] – Has coaching really made the difference for Mississippi State? Is Dan Mullen far superior to Joe Moorhead? I have said it before, and I will say it again: even though they are 3-1, I thought the Bulldogs would be better this season. They drop to 3-2 against the Tigers though no matter who is calling the shots from the sidelines. Tigers by 20.

Kentucky at South Carolina [SLOPFEST OF THE WEEK] – These two teams kind of fall under the same microscope as Mississippi State. I thought both would have more successful seasons up to this point. Kentucky actually has not been too bad based upon the level of competition they have faced. South Carolina has been competitive in their losses to a great team and two decent teams. Something tells me the SEC Network will not set record numbers for this 6:30 PM contest. It will be sloppy (in one fashion or another). Wildcats by 3.

Bye to the rest of the SEC.

Hey, I appreciated the social media lambasting I received last week. Please continue to do so. Find me on Twitter @PeterMorganWPS