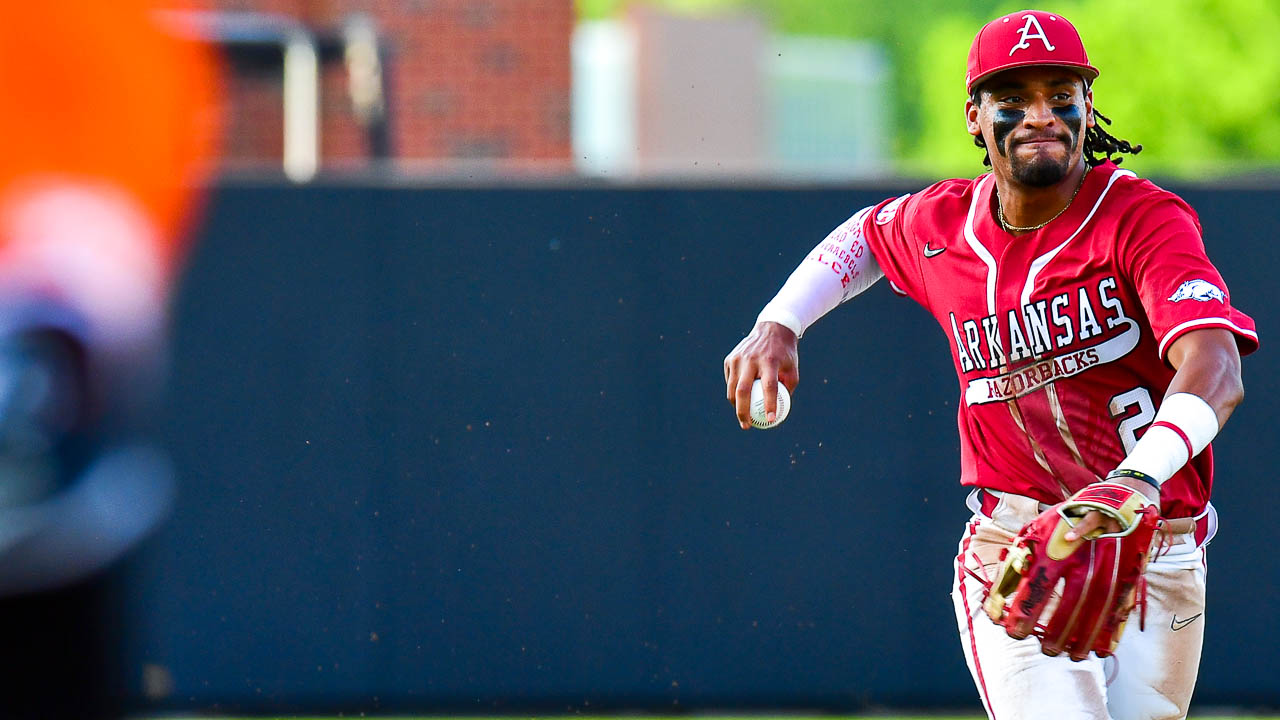 STILLWATER, Okla. — Arkansas scratched and clawed to erase late deficits Saturday night, but a Cowboy four-spot in the 10th gave No. 7 Oklahoma State a season-saving 14-10 win over the Razorbacks.

It took the Hogs all of two pitches to get a run across the plate. Senior center fielder Braydon Webb doubled the other way, and he scored on senior designated hitter Brady Slavens’ RBI single.

The Cowboys  responded with three runs in the top of the second, beginning with a leadoff homer off the bat of first baseman David Mendham. A walk and three singles produced two more runs, and sophomore right-handed pitcher Jaxon Wiggins’ day was done after just nine hitters. He was charged with three earned runs, allowed four hits, walked two batters and struck two out in an inning and a third.

Arkansas got a run back in the bottom of the second. Senior shortstop Jalen Battles reached on an infield single, advanced to second on another knock, moved up to third on a sacrifice bunt and score on Webb’s RBI groundout.

Oklahoma State upped the lead to three runs in the fourth with a two-run homer by second baseman Roc Riggio, his second in as many games against Arkansas.

The clubs exchanged leadoff bombs in the fifth, one from Cowboy designated hitter Griffin Doersching and one from Razorback third baseman Cayden Wallace. The sophomore hit his fifth solo shot in the last four games, bringing the score to 6-3. He drove in two more runs with a two-out single in the sixth, cutting the deficit to one.

Senior left-hander Evan Taylor relieved sophomore righty Will McEntire in the seventh, following 5 1/3 innings of relief. He paid for a leadoff walk and two throwing errors in the eighth, as an Oklahoma State sacrifice fly made it 7-5.

Webb scored from second on an errant throw in the eighth, bringing the Hogs back within a run, before graduate catcher Michael Turner sent Hog fans into a frenzy. His two-run homer put Arkansas on top 8-7.

Senior righty Connor Noland got the call for the ninth, but he was not nearly as effective as he was in the win over Grand Canyon. He allowed two hits and two walks, giving the Cowboys a 10-8 lead.

Down to their final out, the Razorbacks tied it at 10 on a two-run single by Slavens, but Oklahoma State exploded for four runs in the 10th to force a seventh game.

The Hogs and Pokes are set for one last tussle at 6 p.m. Monday. The winner will advance to the super regional round against the winner of VCU-North Carolina.