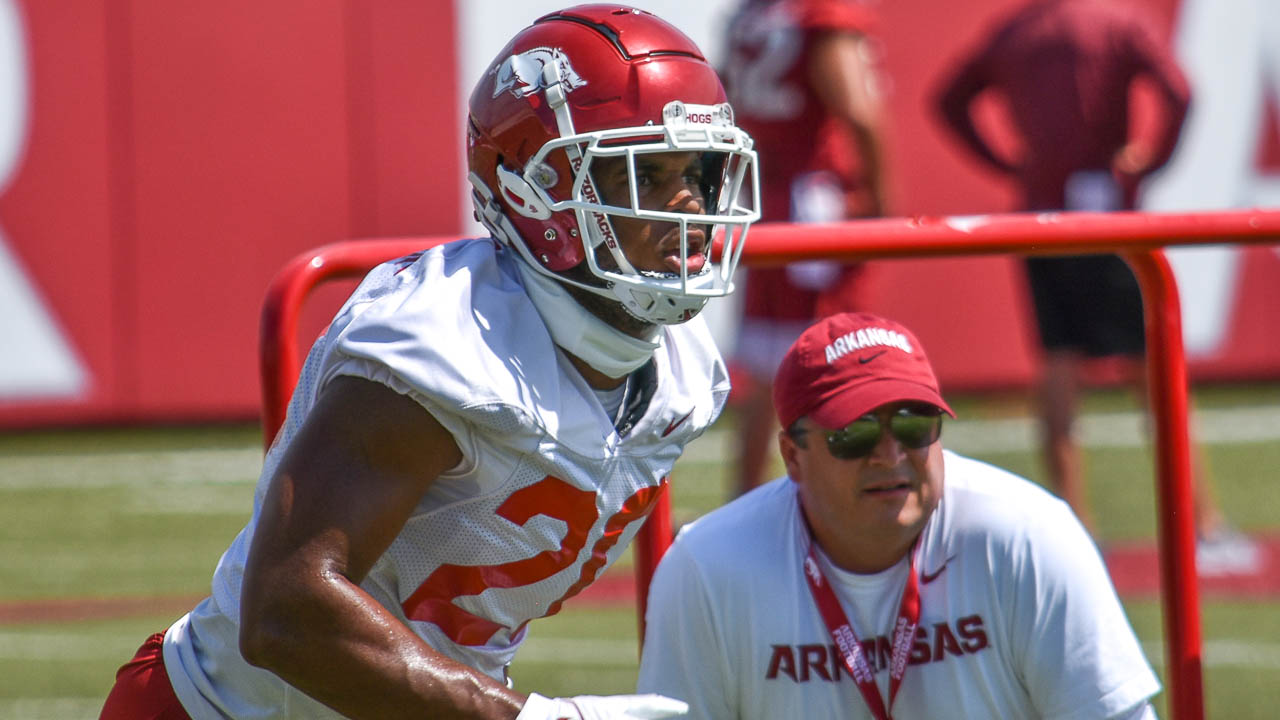 On the defensive side of the ball this fall camp, linebacker is one position where the Razorbacks can’t afford an injury to a starter.

The cupboard of experienced tight ends appears unimproved from 2020. Returnees Blake Kern and Hudson Henry are it.

Kern is originally a product of the Bret Bielema era, a time when former assistant Barry Lunney Jr. coached almost as many tight ends as Sam PIttman coached offensive linemen.

Tight end not only was a big part of those Bielema-era Razorbacks offenses but produced Mackey Award winner Hunter Henry to the NFL. Jeremy Sprinkle and AJ Derby also went to the pros. Cheyenne O’Grady and blue-collar blocker Austin Cantrell also added depth at the position over the years.

Bielema often rolled them in and out two at a time and also used them as H-backs on his teams which had legit bowl hopes and better postseason NCAA football odds than the Arkansas teams of the last three years.

In 2021, Pittman probably would also love to be able to employ a platoon of tight ends as H-backs. But he doesn’t have the depth to do that.

He should thank his lucky stars that Kern, originally a walk-on from Lamar who paid his dues redshirting in 2016 and scout-team apprenticing again without playing a game in 2017, returned for a super senior year.

Kern lettered as a blocker for Chad Morris in 2018 and 2019. He then blossomed not only a blocker but as a 20-catch for 201 yards with two SEC touchdowns as a receiver last year for Pittman.

Injuries put him behind early in 2019 but he was still going to play the maximum four games allowed to redshirt and remain a 2020 freshman. Mumps cost what would have been his fourth game ending the season against Missouri in Little Rock.

Last season covid and a concussion limited Henry to just six of Arkansas’ 10 games. The 6-5, 255-pounder caught 16 passes for 92 yards and a touchdown.

If Blake Kern just repeats last year’s prowess, while of course working to improve, and Henry’s health allows him to fulfill his promise, it certainly would be a good start. But not enough. Not the way Pittman wants to use tight ends to muscle up the running game.

“Me personally, I’d like to get in a lot of 12 personnel where you have two tight ends, Pittman said.  “I think we’re going to do that some, but we just don’t have the depth there.  Somebody’s got to step up beside Kern and Hud.”

Third-year sophomore Nathan Bax, an Illinois State freshman in 2018, is listed as the third tight end as a letterman but  other than two tight end plays against Alabama lettered almost exclusively on special teams.

The rest among others include fifth-year senior Koilan Jackson, moved from receiver and injured the entire 2020 season, redshirt freshman Collin Sutherland, and true freshman Erin Outley, signed off his stellar junior season at Little Rock Parkview after playing only two games before being injured last year for Parkview.

“Bax is there,” Pittman said.  “And we’ve got some other guys that are young that are coming basically off injuries in that room, whether it be shoulders or knees or whatever.  We have to find another tight end at least. I think we will, but that’s concerning because we’re not right now a whole lot deeper there than last year when we finished.”

Pittman wasn’t joking about the need to find more depth. Since his press conference on this topic, he has moved Levi Draper over from the linebacking corps in the latest attempt to fill out the tight end room.

But the Hogs just can’t get any luck in this department. Within days of the move, unfortunately, Draper went down with a career-ending shoulder injury.