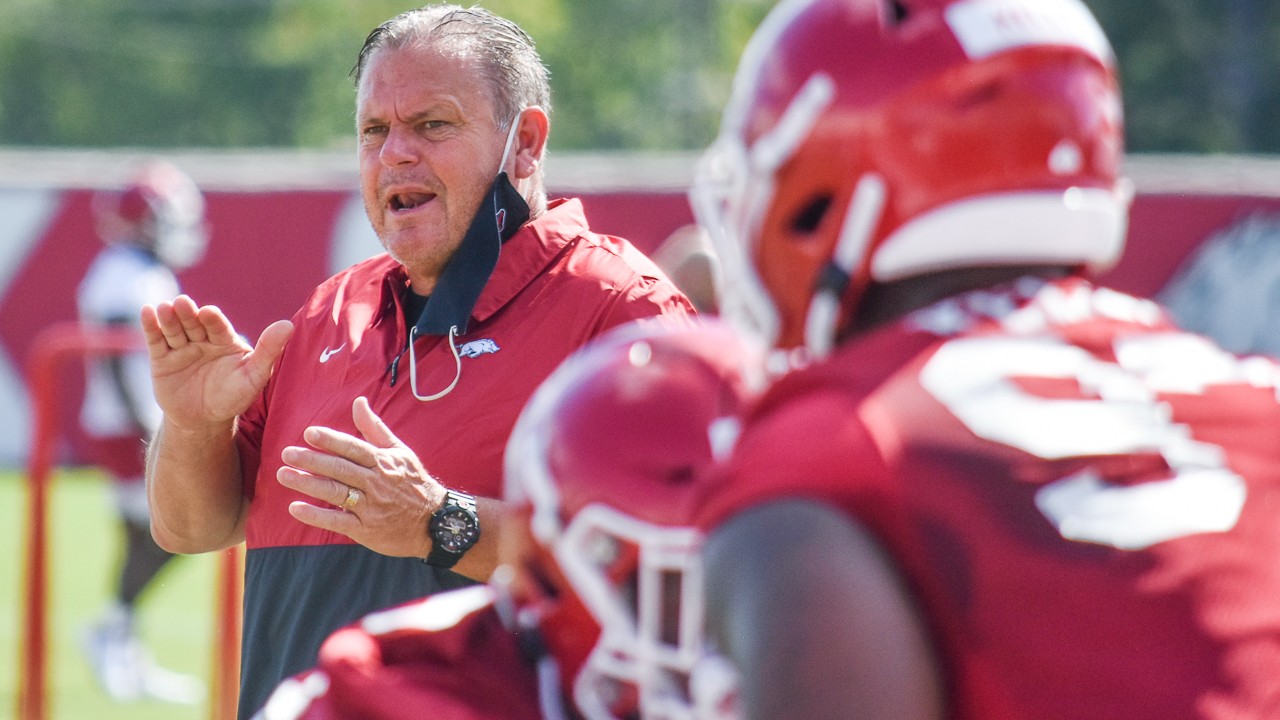 First, let me say there is a qualifier on this column.

We know Arkansas will be short-handed for the LSU game Saturday. We don’t know if that means a handful of bench players or if key starters will be out.

We do know that starting quarterback Feleipe Franks will play because questions of his hand injury he suffered last week against Florida were met with confirmation from coach Sam Pittman that he practiced all week.

So, there’s a lot of uncertainty swirling around this matchup. There is also a possibility that LSU may be missing players after a recent round of Covid-19 struck its program and caused the cancelation of the Tigers game with Alabama last week.

However, LSU coach Ed Orgeron said he expects to be at full-strength.

I’ll take Saturday’s result with a bit of a grain of salt because of the pandemic, but I will stand by what I had planned to write last week.

And that is, Arkansas’ program is in a better place currently than the defending champion Tigers.

You would have thought I was crazy if I told you last year I would pen that phrase. It is indeed nuts how thing can change in a year.

Last year, LSU welcomed Arkansas as nearly a 50-point favorite. They had QB Joe Burrow, the eventual Heisman winner, and they were rolling. Arkansas was at the depths of despair — the darkest moment in program history.

This week, before the pandemic news broke, Arkansas was a slim favorite playing at home. The odds makers called it correctly.

The Hogs have performed better.

The Tigers lost to Mississippi State in the opener, and gave up the most single-game passing yards in SEC history in the loss to the Bulldogs. A week later, Arkansas marches into Starkville and contains the Bulldogs passing attack and wins.

The Tigers also lost at Missouri and were drummed 48-11 by Auburn. The same Auburn team that needed a little help from the officials late in the game to narrowly beat Arkansas at Jordan-Hare Stadium.

Not much has gone right for LSU following the title-game win over Clemson. Orgeron lost offensive coordinator Joe Brady, who took the same position with the Carolina Panthers and Dave Aranda, who became the head coach at Baylor, and had 14 Tigers selected in the NFL Draft.

The staff changes coupled with an extreme loss of talent has the Tigers rebuilding instead of reloading.

Orgeron has proven he’s not Nick Saban and his program isn’t and talent rich as the Crimson Tide and Clemson with their knack for restocking players annually and finding freshmen who are ready to be plugged in.

Hopefully, LSU fans enjoyed the national championship run because this year has been a major dud in so many respects, including some off-the-field incidents that didn’t reflect well on Orgeron or the program.

What I will argue is, it will be too much to overcome, and the Tigers will sink to the lower echelon of the league for a period of time, and Arkansas will replace them.

While the Hogs haven’t been able to pull a shocking upset, they have been more than respectable playing one of the tougher schedules in college football history.

With a game at Missouri next week and a regular-season finale against Alabama to play, the Hogs could finish .500, which not many would have predicted.

Pittman has cemented himself as an SEC Coach of the Year candidate. The turnaround Arkansas has made defensively as a whole and on the offensive line is improbable.

Barry Odom has breathed new life in to the Hogs defensive unit which leads the nation in interceptions. The offensive line has protected grad transfer Franks, and the entire offense is improved.

Even though the season isn’t over, I would expect Arkansas to be picked further up the ladder in the SEC West next year with at least some votes in the Top 25 polls.

I’m not as confident with LSU.

He parlayed that into a permanent gig, and led LSU to its greatest seasons in school history. Now, as things start to unravel a bit, it’s valid to question if Orgeron can right the ship.

Programs have dipped a bit after successful seasons, but Oregeron (48-12 at LSU and 58-39 overall) may have hit his peak.

It appears with everything that has surrounded the program that he has lost the momentum a title provides, and he may not be a strong enough CEO to patch all of the holes that were left following the historic season.

His place in history is etched, but expectations rose, too, and he may not be able to meet those.

Maybe he can get LSU back to contending for an SEC West title, but if he has another subpar season next year, boosters will be less eager to see what happens in 2022.

The two teams are experiencing reversals of fortunes, and if I am betting on the long run, I am taking Pittman and the resurgence he’s leading at Arkansas that could turn into a consistent run of success.