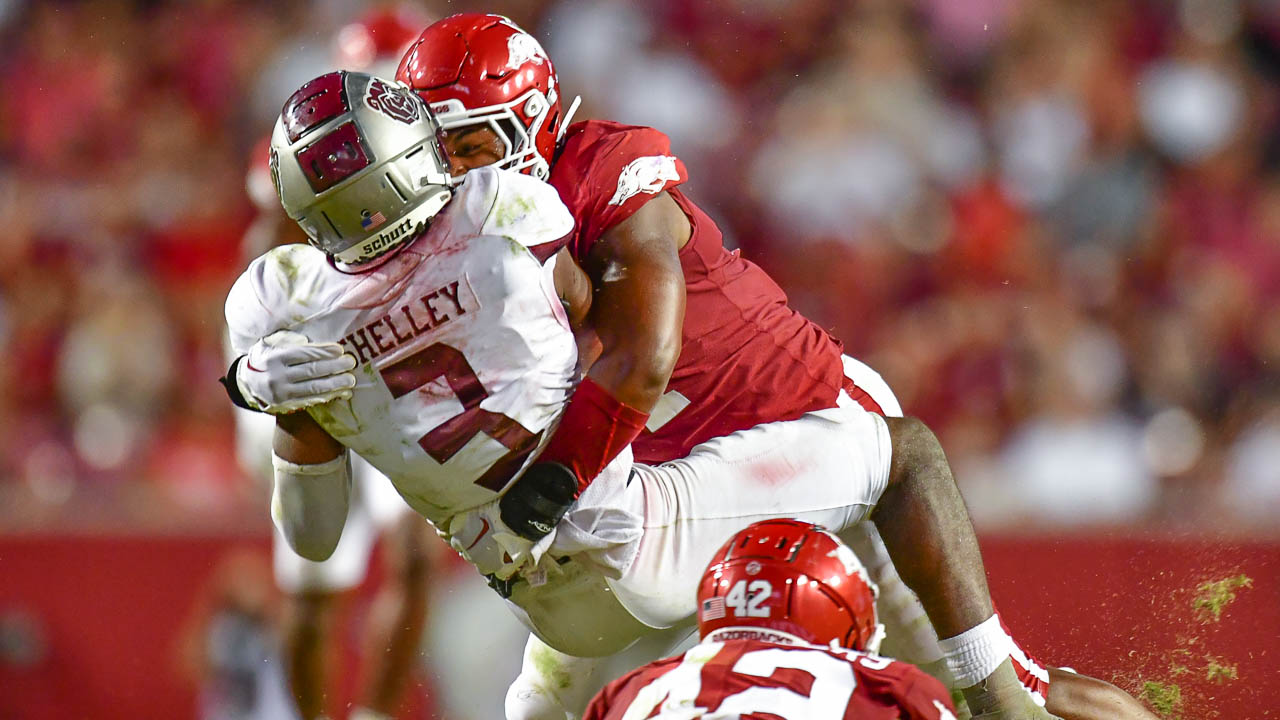 ARLINGTON, Texas — On the surface, being confused over why the Texas Aggies were the betting favorite against Arkansas was normal.

But the line is going up.

A lot of that is due to more money being put on A&M. Before you over-react, that doesn’t automatically mean it’s fans plunking down junior’s college fund on an Aggie win.

While every Aggie I have ever known over 65 years is a little different, I’ve never known one to be dumb or broke. Their engineering school is one of the best in the world.

In sports, though, they have this unique ability to somehow under-achieve what their ceiling might be on an alarming basis in a wide variety of sports.

With a staggering start through three games, lay people think they have A&M figured out and, if you go by the numbers, you come away with the Hogs in a close matchup.

Throw all that in the trash.

Aggies coach Jimbo Fisher knows it’s conference time now. Suddenly players that were suspended are now going to be active for the game with the Razorbacks on Saturday night. Injured players are coming back.

They’ve settled on a quarterback that has played in the SEC before and he fits the mold of a Fisher quarterback. He won’t be great, but he will mostly make good decisions and find ways to put the ball in the end zone.

The Hogs are going to have to come up with some different things this week at AT&T Stadium or it’s going to be a frustrating weekend for fans, who were squirming last week in a 38-27 win over Missouri State when the Hogs were trailing going into the fourth quarter.

Look for A&M to try and exploit the Hogs’ secondary issues. Not necessarily with a barrage of deep passes, but they have some speedsters that can run against some soft middle openings and things could get interesting.

The Aggies have a game plan the Hogs ran against an SEC opponent. The Hogs are guessing what surprises A&M might have (or, more likely changes). Fisher wasn’t going to show everything in a non-conference game.

That loss to Appalachian State doesn’t mean a thing on A&M reaching Atlanta.

Look for the Aggies to throttle the Hogs’ offense enough for an offense to show some speed and things they haven’t displayed in the non-conference.

Not a lot of really great games this week around the league but that will change when the calendar rolls over to October next week.

If there was ever a weekend to point towards adding a ninth conference game to everybody’s schedule this might be it, but this one would make fans want a 10th one.

Kent State at (1) Georgia: Speaking of not showing much, Kirby Smart probably just wants to win this game by whatever he has to and get ready for the conference games. Georgia 52, Kent State 17

Missouri at Auburn: Maybe an elimination game for Eli Drinkwitz at Missouri and Bryan Harsin at Auburn? Auburn 42, Missouri 28

(20) Florida at (11) Tennessee: This game might be for second place in the SEC East and we’ll find out if the Gators can be for real this season or not. Florida 24, Tennessee 21

Tulsa at (16) Ole Miss: Exhibit B in the argument to improve scheduling. Ole Miss 42, Tulsa 21

Vanderbilt at (2) Alabama: While it’s tempting make this an Exhbit D, Vanderbilt is still in the league, so we’ll just have to consider this a bye week scrimmage. Alabama 51, Vandy 10

Charlotte at South Carolina: Now we have reached Exhibit E and the final one. These games are really ridiculous and it’s hilarious to see some people actually look at the numbers. South Carolina 48, Charlotte 21.