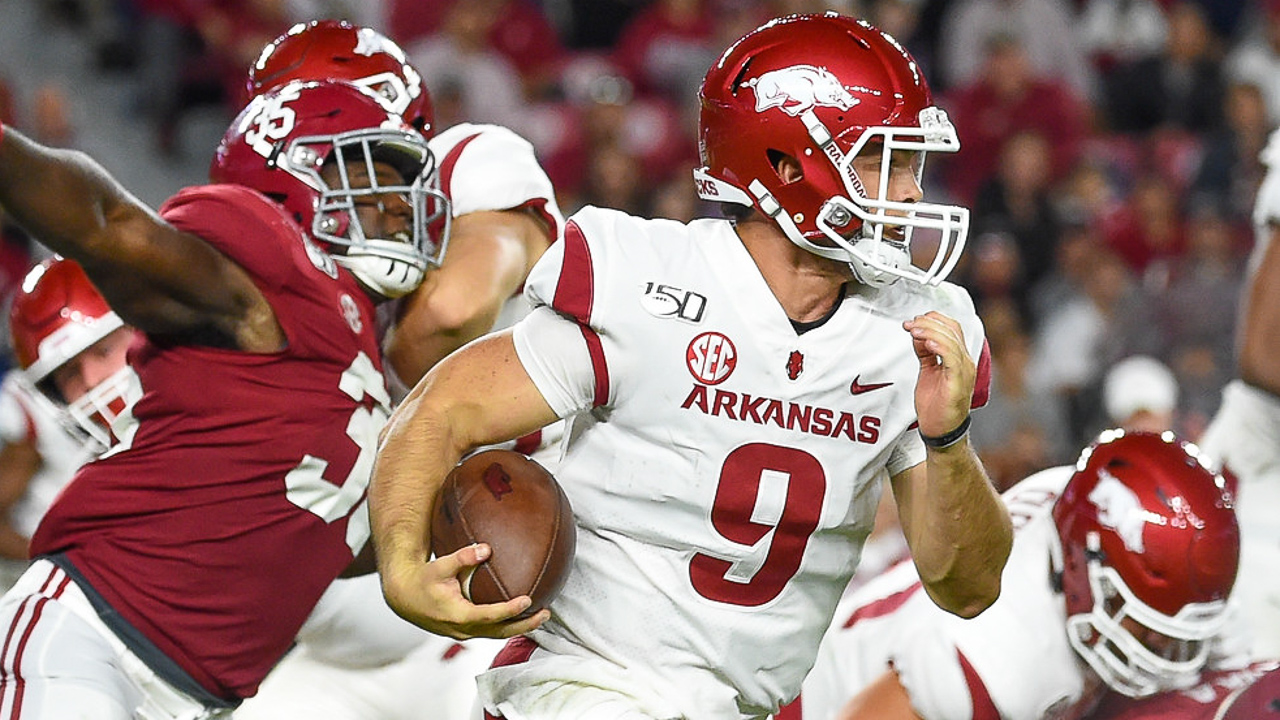 With fan support eroding, Arkansas coach Chad Morris stepped to the podium for his weekly press conference Monday and proceeded to talk in circles for nearly 18 minutes and managing to say nothing.

He even messed up on defensive tackle Marcus Miller’s surgery, saying it was last Friday instead of this Friday. Miller’s still out either way, but it’s a lack of attention to detail that he didn’t need.

Morris is dealing with a lot these days and none of it’s personal, but he is appearing more and more like he’s trying to figure out coaching big-boy football as he goes.

Maybe nothing is more glaring than his handling of the whole quarterback situation.

Oh, don’t misunderstand me. I was around the Dallas Cowboys throughout the 1980’s when Tom Landry got so confused talking about it he announced an offensive lineman as the starting quarterback in the preseason one time.

The difference was Landry rolled his eyes at his own comment, corrected it, everybody laughed and things rolled along.

Morris has no sense of humor that we are aware of. When you’re 4-16 and 0-13 in the SEC and still haven’t beaten a Power 5 team, you better figure out something … and quick.

At times Monday, it looked like Morris would rather have been doing anything except standing at a podium answering pretty much the same questions he’s had all season and figuring out different ways to say the same thing.

Right now, if there’s anything that’s improved he should probably start pointing it out.

The main problems that everyone sees is a lack of wins and either an inability or unwillingness to settle on a quarterback, announce it and let it ride.

“When you look across the landscape of football in general — at all levels — just the consistency at the quarterback position, when you have that, a lot of things line up for you and allow you to have success,” was what Morris said about what he’s looking for.

How about getting the ball in the end zone? Just simply playing the guy that does that the most?

Right now it’s almost like Morris is coaching to achieve a long-term goal, which makes you wonder if he knows something nobody else does.

Neither athletics director Hunter Yurachek or Jon Fagg were at Monday’s press conference. It was one of the few times neither was in attendance. Last week both were there and they might be wondering if maybe only one should show up or people notice.

Morris either has more security than we know or else he’s coaching scared. He’s coaching like he’s scared to really take a shot at winning.

With games against teams the Razorbacks should at least be competitive with in Mississippi State and Western Kentucky (at home), there is a lot of thought he has to win one of those two games.

That “lot of thought” hasn’t come from anybody that really knows, but a lot of people and folks that think they know. The group that does know what’s going to happen is small and they have proven fairly capable of keeping quiet.

Morris is trying to maintain the appearance that he’s treating the game with the Bulldogs this weekend as just another week.

“Whoever we feel like is the best opportunity for us to win that game is first and foremost who we’re going with,” was how he answered the first quarterback question.

Ah, he’s keeping another embattled coach, Joe Moorhead at Mississippi State, completely in the dark about what quarterback to prepare for.

Even though it probably is the last thing the Bulldogs are worried about right now.

Morris could either go with the quarterback that got the team in the end zone the most in fall camp (John Stephen Jones) or the one many of the fans (and many of the players) think should be playing in K.J. Jefferson.

He’s covered the whole redshirt thing with Jefferson. Jones is going to be a sophomore next year in any circumstance.

Ben Hicks and Nick Starkel haven’t shown much except that they are consistently inconsistent.

According to Morris’ own comment, that should create at the very least a point on what he says is the determining factor. You would think if they’ve consistently shown they can’t handle it, you might want to try something different.

How Morris handles it will provide the answers to whether he gets another year in Fayetteville or not.