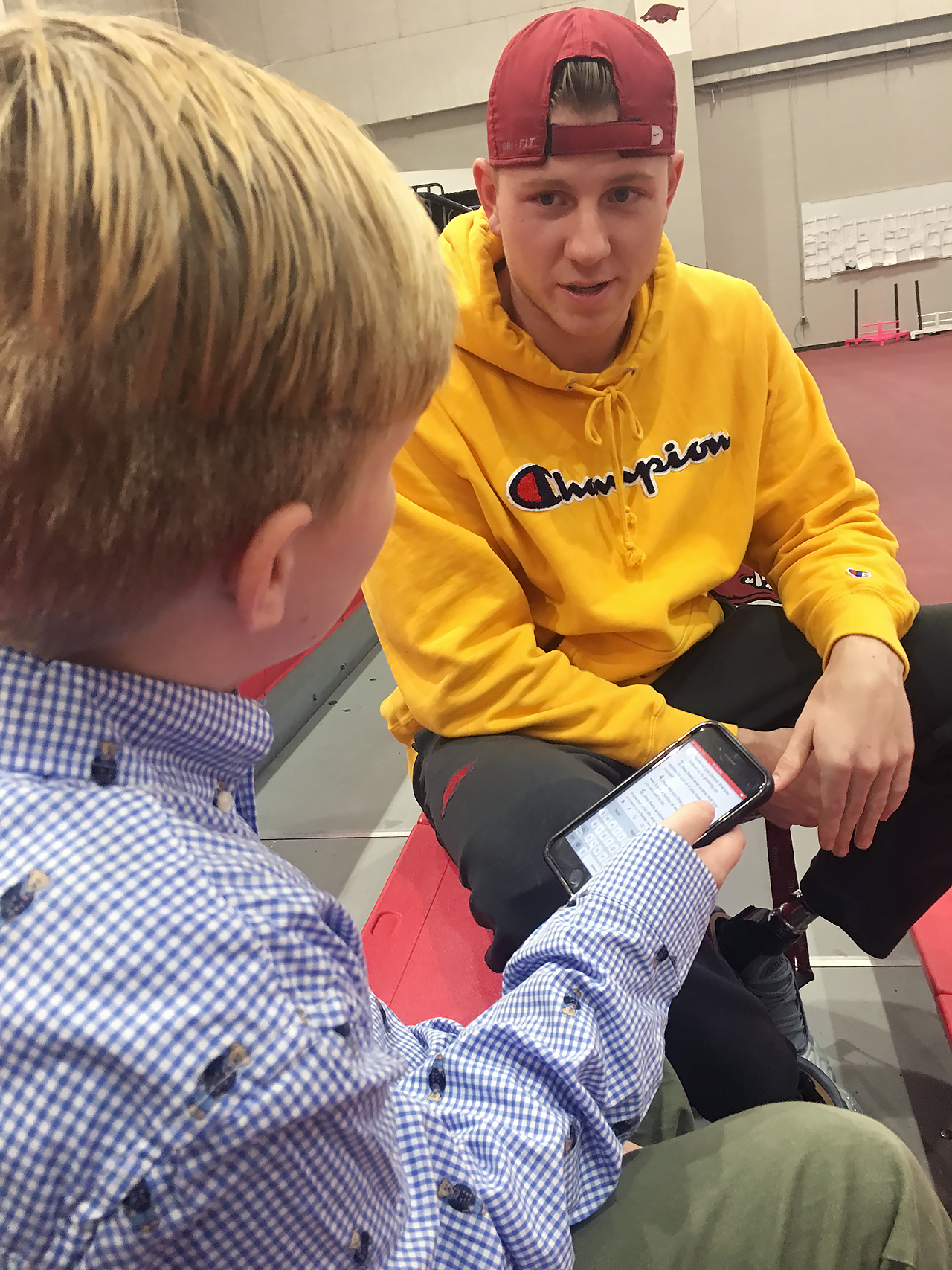 Editor’s Note: Eleven-year-old J.D. Olson, the son of HitThatLine.com contributor Nate Olson, sat down with Arkansas track star and double amputee, Hunter Woodhall, as the 2020 indoor season was winding down and the outdoor season was set to begin before the pandemic halted SEC spring sports. J.D. just finished fifth grade at Collegeville Elementary School in Bryant.

By J.D. Olson
Special to HitThatLine.com

Hunter Woodhall’s track accomplishments would be impressive if he had two good legs. He doesn’t. A condition caused Woodhall’s parents to make the decision to amputate his legs when he was 11 months old.

Even though he faced much adversity growing up, he eventually found track and his success helped him to become more accepted by his classmates.

He became the first double amputee to earn a Division I scholarship when he signed with the University of Arkansas. He ran six indoor meets as a freshman and recorded a personal best 1:58.04 in the 800-meters.

He ran a best time of 47.42 in the 400-meters and was a bronze medalist in the 4×400-meter relay at the SEC Outdoor Championships.

He was named to the First-Team All-American Team at the NCAA Outdoor Championships after his 4×400-meter relay team finished sixth.

Woodhall hoped his junior season would be his best yet.

His 4×400 meter relay team took second as the SEC Indoor Championships, and he qualified for the indoor nationals in the 4×400 meters and distance medley relay. The 4×400 team won the event at the Arkansas Invitational and ran the fifth-fastest time in school history and was ranked as the fastest 4×400 team in the nation in February.

The indoor season ended suddenly before the NCAA Indoor Championships, and the outdoor season was canceled before it began due to the COVID-19 pandemic.

I learned about Woodhall’s story while following him on the social media app Instagram. He posts many inspirational videos on the app. When someone asked about why he doesn’t have any legs, he told his story, which had millions of likes and views.

That story caused Ellen DeGeneres to invite him on her daytime talk show. Ellen then surprised Woodhall with a $20,000 check to use for his expenses to compete in the 2020 Tokyo Paralympics, which have now been postponed.

I had a chance to sit down with Woodhall during the indoor season. We talked about his childhood, signing with the Hogs, going on the Ellen DeGeneres Show and more.

Q: Were you bullied growing up because of your legs?

A: Yeah, I went through a lot of bullying. I was home schooled until I was in the fifth grade. My parents started a business, and they didn’t have time to home school me anymore, and I went to public school. I went through a lot of bullying in fifth grade and into sixth grade as well. It wasn’t until I got to junior high where I found some friends who really treated me like I should have been. I had some friends who really cared about me.

Q: Did you play any other sports growing up?

A: I played all kinds of sports. Both of my brothers played sports, and I just wanted to follow in their footsteps. I started with T-ball, and then soccer and I played basketball and wrestled. I obviously ran track and played football. Basically, anything I could try out I did. I wanted to do what my brothers were doing.

Q: Was there a time you wanted to quit or doubted yourself?

A: Absolutely. There’s been so many times in my life, especially in sports, where things have gotten really hard, and I’ve questioned if it’s the right thing to be doing or not. When you get past those points and fight through that and come out the other side, you come out a better person and better athlete. I think it’s our hard times and our failures, which really define who we are.

Q: How did you first get into track? Was it a hobby at first, or was it something you were really focused on from the beginning?

A: That’s a good question. I started running 5Ks and things with my family – fun runs over the holidays and things like that. Like I said, I went through a lot of bullying, and when I got to junior high, the few friends I did have, were on the track team. So, I started running track because I felt comfortable on the team and felt comfortable being around my friends. That’s actually what got me running.

Q: Was there anyone who impacted your life like a coach or family member?

Q: What has been your main motivation?

A: There have been a lot of people behind me, but one of the biggest motivators for me is I have just been scared to let those people down. Not just one specific person but everyone who has taken the time to say they believed in me or defend me or something like that. The moment I give up or stop chasing my dreams is when I let them down. To know they believe in me and want me to succeed – I have to do whatever I can to prove them right.

Q: What was your initial reaction when you found out you had an offer from Arkansas?

A: Excited I would say. My recruiting process was extremely difficult. I had really hard time getting colleges to recruit me just because I was missing my legs. It had always been a dream of mine to compete in a conference such as the SEC. Just to be able to have that moment and share it, not only with my family, but also the people that have supported me to this point. That was a big deal in my life and real emotional.

Q: What was one of the most important tools you used to become an athlete?

A: I would say discipline is the biggest one. Discipline is such an overarching topic, and it can be applied to so many parts of your life. It always flows over to different parts. For example, when you are disciplined in the classroom, you are probably going to be even more disciplined when it comes to your sport or the chores you are doing or all of those things. When you can be disciplined in all aspects of your life, they all coincide. It’s hard to put a little bit of effort into one thing and think you are going to be all in and 110 percent in another thing.

Q: When you first came to Arkansas what were your thoughts when you struggled a little bit individually?

A: My freshman year was really difficult for me. I wasn’t used to the training, and I wasn’t used to how fast everyone was running in the NCAA, so it was really hard for me to adjust. It was one of those times I talked about earlier when you go through a hard time or hardship, and you have to reevaluate and keep pushing on. It was a lesson for me that I can’t take anything for granted, and if you want to compete at the highest level,  or you want to be at the highest level, in anything you are doing it is going to take some work.

Q: What was it like being on The Ellen show and knowing hundreds of thousands of people were watching?

A: It was so cool. I think it was amazing to be around someone who has such a positive outlook on life and puts so much love back into the world. Just to be able to use my story and what I have been through to impact somebody else’s life, that’s what it is all about. That’s very special.

Q: Have people ever said anything about your artificial legs being an advantage in your running?

A: Yeah, I get that a lot, and usually … It happens the faster I run the more people are complaining. That is just one of those things where when things start happening in the public eye and people start watching, there’s always going to be people saying negative things. I think in my mind, we are not going to focus on the people that are being negative because that is going to take away from the people who are supporting us – right? It makes more sense to put all of our effort and attention into people that are supporting us and saying kind things.

Q: What is a piece of advice you want to give to other kids and athletes who are dealing with disabilities?

A: I think not even for disabilities, but everyone – it doesn’t matter who you are or where you are from, success is something you decide to do. If you have a dream, there is nothing that separates you from the person sitting next to you in class or the person on TV. We are all humans, right? The thing that makes you successful is how much do you want it, and how much do you want to work? And are you going to make sacrifices for that? So, just chase your dreams regardless of who you are and where you are.